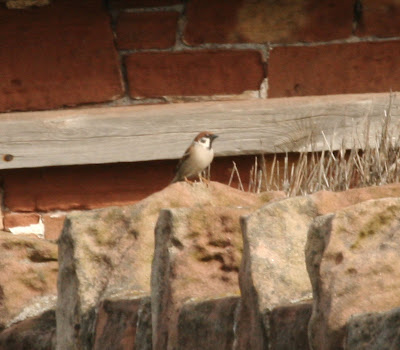 With the air pressure rising and mid-April approaching not quite the day as hoped for, nevertheless a lot of interesting species to be seen today. Star bird was an unexpected Tree Sparrow (left) which spent a short time around the centre of the island but managed to evade capture and frustrate the ringers, a House Sparrow also visited the island. Six Wheatears stayed about the rocks and also refused to cooperate but not so the 2 Chiffchaffs (below) which were much more obliging. 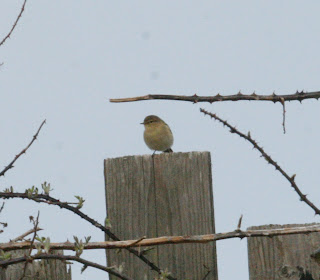 Not as many finches today with only 5 Goldfinches and single Chaffinch, Greenfinch and Lesser Redpoll. A Reed bunting was on the ground briefly but a Tree pipit was identified from only from its call.
Two Sparrowhawks were flying off to the east side of the island, 3 Jackdaws flew east high over the island and a large Peregrine rested on the sand for some time. A Little Egret was in the east gutter most of the morning.
A fine day at this time usually produces a good hirundine passage but today there were no Swallows, although in compensation 4 Sand Martins and a House Martin went through.
A very calm sea made for easy sea watching with the Little Gulls off to the north and east for a change and somewhat closer, almost in camera range, and enabled 153 to be counted. The photographs of these dainty gulls show characteristic dark under wings and pale upper wings in flight. 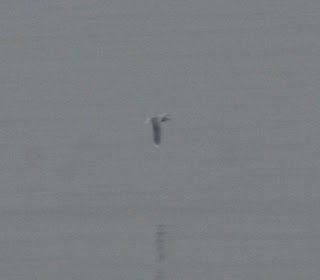 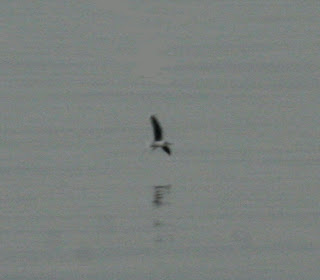 The 2 Velvet Scoters are still on station and 3 Eiders flew near the island. A first winter Mediterranean Gull was found near the north end before it flew off east. A single Red-throated Diver, 8 Great Crested Grebes, 26 Common Scoter and 20 Gannets completed the sea watch with still no records of the long overdue Sandwich Terns.
Ringed :- 2 Meadow Pipits, 3 Wrens, 2 Chiffchaffs.
(EJA,DB,CJ,KMc,SRW) [72] photos CJ
Posted by Colin at 15:56