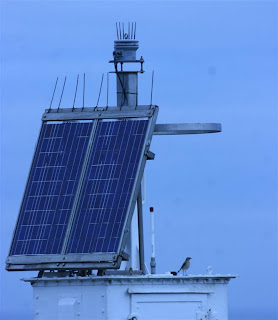 With a light westerly breeze observers were not expecting much in the way of grounded migrants this morning however a single Willow Warbler was found in the SK early on. Up to eight Wheatears had arrived by midday with one bird hanging around the light (see below). 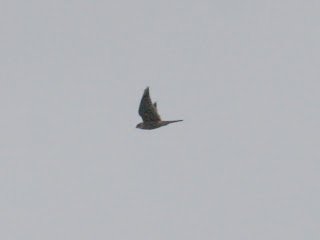 A Merlin raced through again and flew off north west over the North End (see left). As the tide pushed in a few Sandwich Terns could be heard calling as could Whimbrel, although in smaller numbers than the last few days (12 so far). A couple more phylloscs appeared mid morning with single Willow Warbler in the Old Obs and a Chiffchaff in the new Obs although the latter was caught in the SK paddock net (see below). 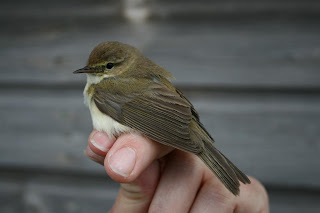 Two Canada Geese passed over the south end and a few Swallows (20) and House Martins (2) pushed through despite the 'wrong' wind direction.

The highlight of the day arrived during lunch when the first Swift of the year flew in from the west in front of advancing rain and was spotted from the dining table!

It's intriguing to see that there were (relatively) few migrants at Hilbre this morning, when only a few miles away at the Point of Ayr it was crawling with them.

Are the conditions for a good fall of birds more specific to Hilbre than on the estuary in general?

Certainly at Hilbre (particularly in spring) south-easterly winds are best but also for a 'fall' visibilty either needs to be restricted by mist (preferably so you can see Hilbre from West Kirby but you can't see Wales) or cloud cover and some precipitation helps to 'down' birds on the island.

In westerlies (like on the 29th) we would only expect to see a few Wheatears and possibly a few Willow Warblers, certainly not large numbers and no great variety (although there are always exceptions - eg the last Subalpine Warbler!).

I really dont understand how Point of Ayre managed to be crawling with newly arrived migrants as opposed to local singing males arriving in situ in reasonable 'navigate home' conditions..... but maybe after another 30 years at Heysham, I'll begin to understand it all!!

It was probably precipitation that was the major factor then - it may have rained at POA, but not at Hilbre?

Rain started to fall about seven, and at one point you could actually observe some small passerines dropping from quite high up straight into the hawthornes.

As for the locally singing males, then, obviously, many passerines were on territory - but there were at least one hundred Wheatears that were 'new in.'