There was a massive influx of large gulls onto North Wirral shore this week; this appears to have been prompted by a star fish wreck. On Hilbre there have been many thousands of Herring Gulls visible from the Obs feeding on star fish on the East Hoyle Bank (as well as several more thousand more typically on the West Hoyle sand bank).

This has also brought a small influx of white-winged gulls to the North Wirral shore – none have been seen from Hilbre yet (despite searching!) – but a few have been found by Obs members between Hoylake and Leasowe.

On Wednesday 31st March MGT found a juvenile/first winter Glaucous Gull off Hoylake and this was the start of the “white-wingers”.

On Good Friday 2nd April AMC found the same, or another, Glaucous Gull off Leasowe opposite the lighthouse on the sand before it was moved by the incoming tide (see below). 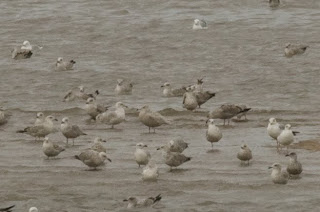 This bird was successfully twitched from Hilbre and shortly afterwards BT discovered a second winter/summer Iceland Gull loafing on the water near Barber’s Folly (east of Dove Point). This bird showed well until it decided to fly off east (see below). 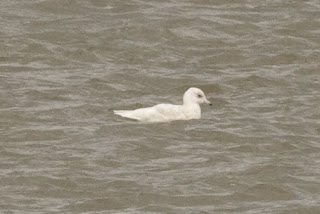 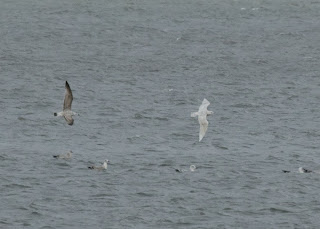 However, later that day the same bird was rediscovered off King's Gap, Hoylake, by JET and a second Iceland Gull (a first winter) was also found nearby by MGT.

Finally, on Saturday 3rd April 2010 FD refound the juvenile/first winter Glaucous Gull off Leasowe ... surely we are due one on the island soon, the last Iceland Gull on Hilbre was seen on 4th April 2009... (see blog entry for that date).

Update 5th April 2010 - the juv/first winter Glauc has been seen off Leasowe and Meols on Sunday (4th) and today (5th).