A fresh westerly breeze and good visibilty greeted observers early this morning and no-one was surprised to find no grounded migrants on the first few rounds of the island.


However, the sea provided some interest with 20+ Arctic Terns recorded along with 25 Sandwich Terns, 75 Gannets and half a dozen Kittiwakes including the lingering bird (see below) at the North End. 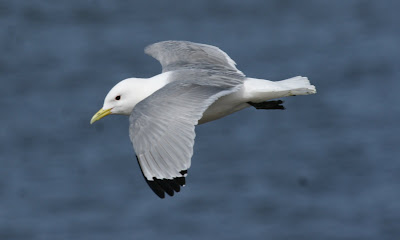 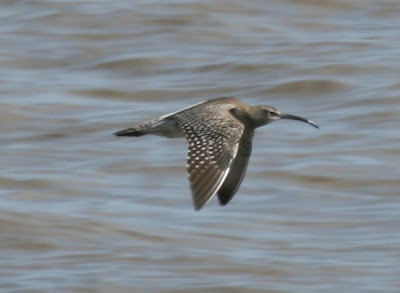 Observers had to work hard for good birds today but over 30 Whimbrel were again recorded (see right) including a flock of 20 roosting on Middle Island, when they were temporarily joined by a Little Egret during the high tide. There were still plenty of Ringed Plover and Dunlin in fine breeding plumage around the islands today.


A Common Buzzard was found being mobbed by gulls and then Crows heading south down the coast over West Kirby; the usual debate began as to whether it could be counted for the recording area... 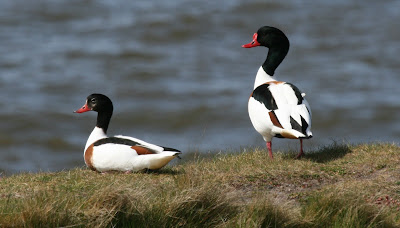 As the sun came out around lunch time a Wheatear put in an appearance but was kept from their usual West Side haunts by displaying pairs of Shelduck (see left - female left, male right).


Just as thoughts turned towards whether or not the wind would shift to the south - a walk around the South End revealed a skulking Grasshopper Warbler. It was promptly trapped and became the only bird ringed today. Interestingly, it had a significant amount of fat - so presumably had arrived a day or two ago (with others) and had fed up successfully on Hilbre or had only just arrived from somewhere relatively close by... bird from today (below left) and one from Saturday (below right). 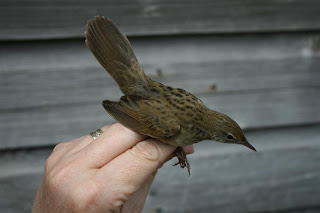 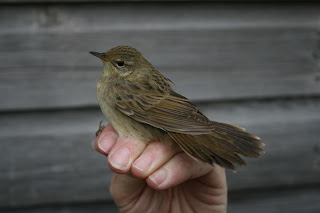