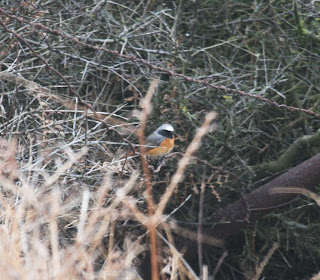 At last a proper fall of migrants ! The south easterly breeze and patches of slight drizzle promised much and for once it did not dissappoint.
There were at least 40 Willow Warblers through the islands most of which had gone by 10.00hrs, and the 8 Wheatears were even less tardy, moving off almost as soon as they arrived.
A small passage of Meadow Pipits (70), also a Tree Pipit and 11 White Wagtails went over but finch migration did not impress, just a few Goldfinches and 7 Lesser Redpolls. Hirundines however passed south in some numbers, 331 Swallows, 40 Sand Martins and a House Martin were logged near the island but there were probably many times more as they could be seen distantly moving across the beach streaming into Wirral and beyond. 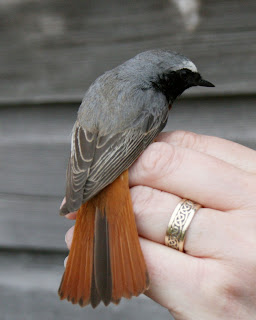 Star birds accompanying the Willow Warblers were a female Blackcap, 2 Grasshopper Warblers, and the first Common Redstart of the year (above and right), a superb male.
With the observers fully occupied on the island, there was not much time to examine the sea or shore, although 6 Gannets, 9 Whimbrel, and 2 male Eiders flying up the east side were recorded. Just before the tide 6 Little Egrets were noted near Little Eye, which then flew to Middle island, and were subsequently joined by another 2 from the direction of the marine lake. 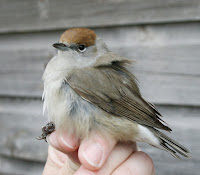 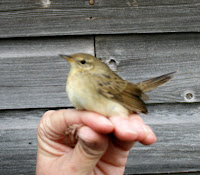