Rain overnight cleared just after dawn to reveal a few Willow Warblers on the ground, but no larger warblers as there had been yesterday. The Willow Warbler trickle continued during the morning as the wind veered from south east to south west and then west.
Only a few Greenland Wheatears appeared and they moved on very rapidly as most have done the last few days. Later in the morning a Whitethroat and a Chiffchaff made it to the island as the day warmed up. 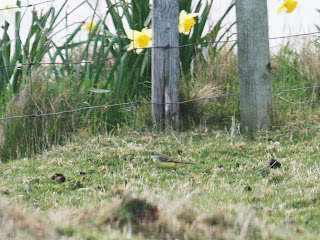 Some new passing Meadow Pipits added to the resident numbers, while there was just 2 House Martins and 4 Sand Martins amongst the hundred plus Swallows. 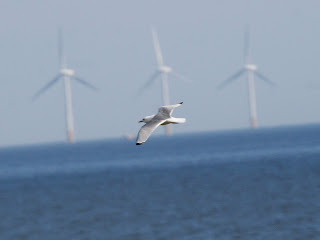 Two Tree Pipits were heard high up but the only Yellow Wagtail of the day chose to alight for a short time in the top paddock (above). 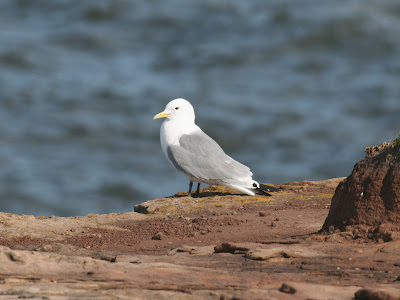 Sea watching was again at its best as the tide rose, this time 50 Gannets, 20 Common Terns, 15 Sandwich terns and 4 Little Gulls showed off the west side. A single Kittiwake alighted on the rocks at the north end at high tide (left) and made short flights around the end of the island (above). 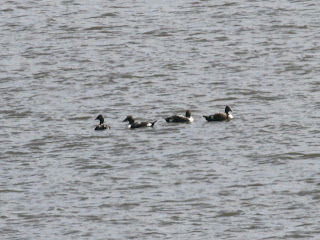 Unexpected sightings included a Golden Plover calling high up off to the west side, and 4 immature 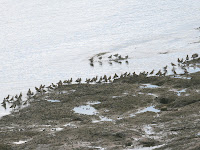 male Eiders (right) drifting along on the ebb tide also off to the west. A Little Egret in the east gutter was the first

There are still at least 300 Dunlin on the shore ( above left), and Whimbrel are still at the 40 + mark and often flying in flocks (right). 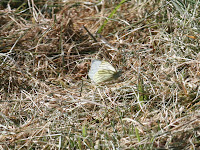 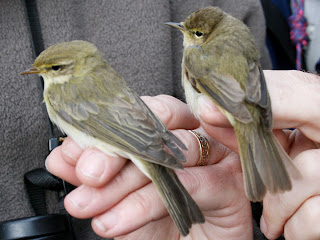 Photo with Willow Warbler (left) and Chiffchaff (right) makes for nice comparison showing the longer primary projection of Willow Warbler and the often quite different facial expression in part due to the Willow Warblers more obvious supercilium and loral stripe, and the prominent eye-ring of many Chiffchaffs.
(JE,CJ,BT,DCT,PT,NDW,SRW,TGW) [ 190 ] photos CJ
Posted by Colin at 15:42