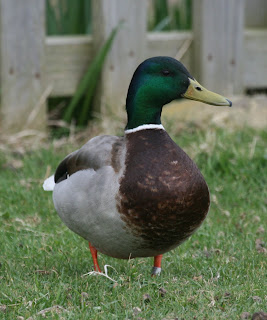 Another blustery day, this time from the south west. A Reed Bunting first thing got hopes up that there would be a few migrants around today - but this was a false dawn, only half a dozen Swallows passed through and about 50 Meadow Pipits flew over. A Meadow Pipit and a Linnet were trapped and ringed but there were no other grounded migrants.

Up to 80 Pale-bellied Brents remain around the islands but only a couple of Purple Sandpipers were seen today and a couple of the drake Mallards spent some time sheltering in the upper paddock where the sheep are kept (including this Hilbre ringed bird - see right).

A sea-watch on the incoming late afternoon tide produced 25 Great Crested Grebes, a single Razorbill, 4 Guillemots, two summer plumaged Red-throated Divers, 35 Gannets (see below) and the two 'semi-resident' Velvet Scoters were again present out towards the green buoys out to the North East. 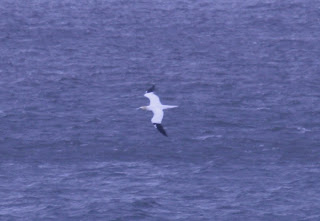