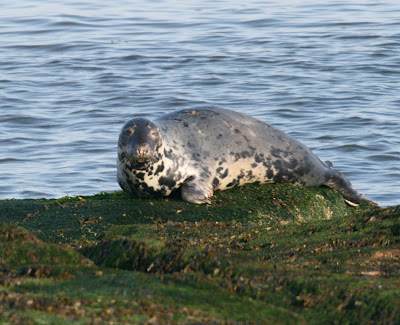 Very light winds with a slight southerly element did not produce much but hopes are high for the next few days.
Twelve Greenland Wheatears were seen to pass through after first light but all had departed as early as 07.00hrs. A Yellow Wagtail flew over Middle island early and was one of the few visible migrants during the morning. Goldfinches, a Lesser Redpoll and 3 White Wagtails made an appearance with just a single Willow Warbler on the ground. As the morning warmed up Swallows and Sand Martins made an appearance in small numbers. Whimbrel are now heard regularly on the rocks around the islands (right), and today a Grey seal decided to join them just off the slipway at the north end (above).
Ringed:- 2 Goldfinches, 1 Willow Warbler, 1 Linnet.
(DB,CJ,KMc,et al) [149] photos CJ
Posted by Colin at 12:55