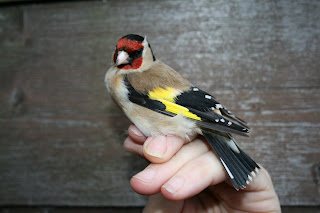 8pm update. The wind swung to due south overnight but remained blustery until lunch time after which it dropped and moved back to the south west with drizzle arriving early evening. The main movement today was of Meadow Pipits with over 500 passing over, as well as 4 White Wagtails, 26 Goldfinches (including one caught - see right), a single male Wheatear (the first for a few days) and the first Tree Pipit of the year flew over the Obs garden calling and heading south (as things do at Hilbre!)

Later in day a small passage of hirundines included 25 Sand Martin and 20 Swallows pushing through before the rain arrived.

A new Robin was also trapped and ringed first thing but there was no sign of any warblers today. A Sparrowhawk caused a little disturbance with gulls and the local Crows around Middle and the Grey Herons also set the gulls off several times, but we still await our first Osprey of the year...

The Pale-bellied Brents increased again to 116 (see below) and two dark-bellied reappeared. Small numbers of waders were present on the late afternoon tide and included a Greenshank heard calling from the Obs balcony.

On the sea 120 Little Gulls were seen off the North End along with 46 Great Crested Grebes, 5 Red-throated Divers, 15 Guillemot, 25 Gannet, 15 Common Scoter and the two Velvets were also present.