An attempt to ring some waders during the night failed when insufficient birds were present during the night high tide, in fact apart from the odd Ringed Plover and Oystercatcher heard, the only real targets were 6 Purple Sandpipers roosting at the north end which failed to travel in the desired direction. 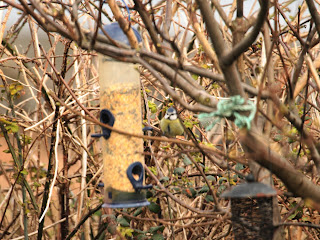 In the morning the bird list looked like a typical early spring log but the weather did not feel at all like spring ! The south easterlies were very cold an uninviting to observers although reasonable birds showed up in small numbers. Rarest of the day were 2 Blue Tits (right) which found their way to the garden feeder and one was eventually ringed. The supporting cast included a male Blackcap, 2 Jackdaws, and a House Sparrow. A single Chiffchaff was around the paddocks from dawn and also alone was a Swallow that passed the north end late in the morning, just 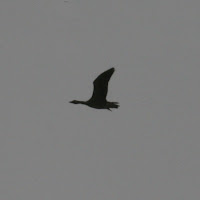 before a Greylag Goose (left) flew over the obs. Greenfinch, and Chaffinch were in single figures only but Goldfinches numbered 13, and a single Lesser Redpoll flew over calling. A few Pied Wagtails went through although none of the White sub-species were identified. The male and female Wheatears on the main island were long-stayers already bearing rings, although the 2 on Middle island were new birds.
After a quiet morning on the sea 32 Little Gulls were eventually picked up in flight off the north end. 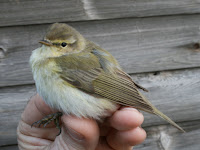 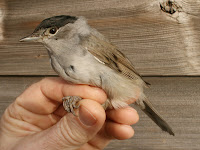 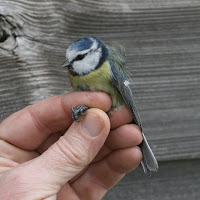