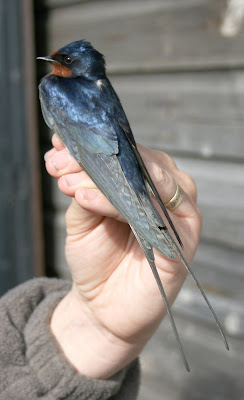 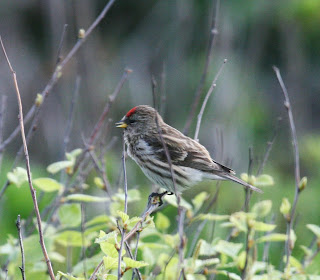 With the wind in the west the island was as quiet as expected although 2 Willow Warblers were present, one of which was a ringed bird from yesterday. One Wheatear was the sum total for the morning and overhead passage consisted of a couple of Lesser Redpolls, one alighting in the obs garden (above right), 17 Goldfinches, a few dozen swallows and a single Sand Martin.
Although Swallows were at a much lower number than recently a splendid male was caught in a mist net (above), which failed to catch any this year during the days of much larger movements. 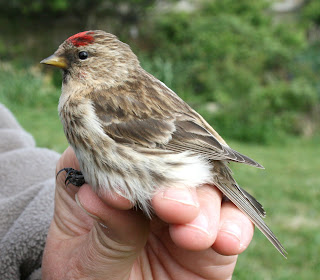 Following the first yesterday the second Swift of the year flew low across the island at about 06.40hrs during a period of quite heavy rain showers. 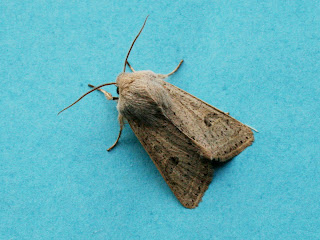 Moth trapping last night was moderately successful and a scarce species for Hilbre in the form of a Powdered Quaker (left) was found.
Ringed:- 1 Swallow, 1 Willow Warbler, 1 Lesser Redpoll (above), 1 Linnet, 1 Goldfinch.
(ME,CJ,DCT,PT,CJW,NDW,SRW) [234] photos CJ
Posted by Colin at 11:33