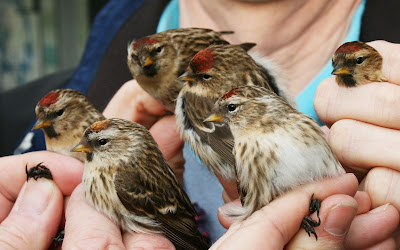 Less than half the numbers of phylloscopus warblers today than yesterday but Redpolls were almost as many and a flock of 6 found their way into the 'newton' trap early in the morning enabling a group photo to be taken shortly before release. Six Swallows were the only hirundines and in contrast to yesterday only 2 Wheatears and a single flock of 5 White Wagtails were sighted all morning. The normal couple of dozen or so Goldfinches were logged with a solitary Chaffinch appearing down on the island. A Tree Sparrow was again vocal for a while, and a Grasshopper warbler inhabited the same patch as the one re-trapped yesterday and indeed may be the same bird. The Merlin showed again early in the day and a couple of Greylag Geese flew over the beach towards West Kirby. The sea was quiet but 2 groups of 4 Sandwich Terns were logged with a single Great Crested Grebe. Only 3 Brent could be found but there may well be more as the islands were disturbed by the amount of visitors in the fine weather. Ringed:- 9 Lesser Redpolls, 4 Willow Warblers, 2 Chiffchaffs, 1 Chaffinch, 1 Wren.(DB+ESCA,JE,CJ,KMc,SRW,CJW) [180-27] photo KMc.
Posted by Colin at 14:53