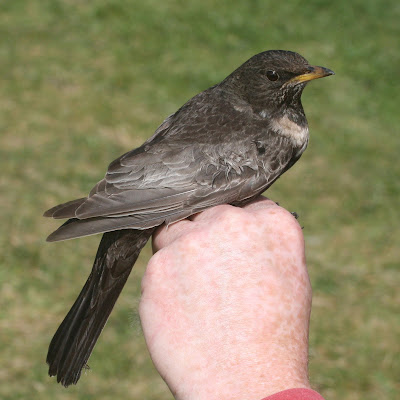 Just when the members thought a very satisfying morning was over, and as they were leaving the island a Ring Ouzel flew in from Middle up the west side. This was the cue for a quick about turn to search the island.The bird was then seen briefly along the west side before being found in the SK trap (left). This is the second Ring Ouzel to be ringed this spring, an event not repeated very often. The morning began with a great variety of species in the paddocks including 3 Sedge Warblers, and single Blackcap, Grasshopper Warbler and Whitethroat (below). The Whitethroat is the first this year and has been expected for the last few days. Willow Warblers were not in large numbers today but a few more arrived mid-morning to give a total of about 15, with a Chiffchaff for good measure. Only 3 Wheatears graced the west side, but 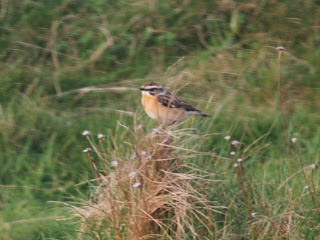 another new species for the year arrived in the form of a beautiful male Whinchat (left) that was very mobile. There were up to 100 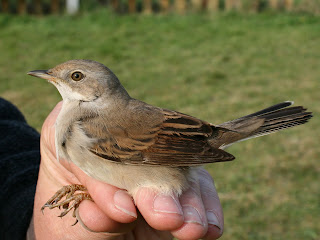 Swallows, 2 House Martins and a Sand Martin to be seen, and the Meadow Pipits went through in some numbers today with 9 Tree Pipits being heard by 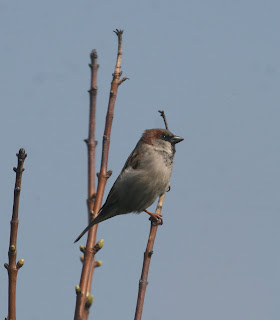 midday. Yellow Wagtails also did not disappoint with at least half a dozen in the morning, with 2 Grey and several alba adding to the wagtail count. Goldfinches as usual were present in many dozens, Redpolls were slightly less numerous, a male House Sparrow visited (right) and a single Reed Bunting flew through. Three Whimbrel are around the shore.
Ringed :- 11 Willow Warblers, 2 Greenland Wheatears, 1 Ring Ouzel, 1 Grasshopper Warbler, 1 Blackcap, 1 Sedge Warbler, 1 Whitethroat, 1 Linnet, 1 Redpoll, 1 Goldfinch, 1 Meadow Pipit.
(FD,CJ,KMc,CLW,CJW,GIW,TGW,CJW,DEW,SRW) [326-35] photos CJ
Posted by Colin at 16:59