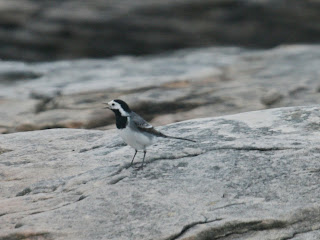 A very quiet morning on the island with no warblers, no Wheatears and no finches apart from the breeding linnets and 2 visiting Greenfinches and a single Goldfinch up to 10:00hrs. A White Wagtail (left) came down on the rocks at the north end and a few 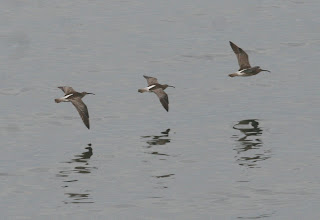 Swallows starting passing in better numbers than recently and more are expected as the day warms up. An unusual number of Dunlin for this time of year gathered in wheeling flocks west of middle as the tide flooded, and estimated 3,000 all told, while 6 Whimbrel (right) were also about the islands. Another s 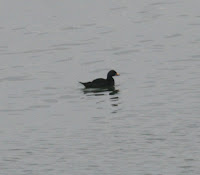 pecies in large flocks were about 1,000 Common Scoter seen distantly out by the north Hoyle wind farm, closer in was the single male Scoter (left) that has been hanging around for a week or so; the only other notable birds on the sea were 14 Sandwich Terns. Three Peregrines were logged, 2 of which seemed to be associating together in the air. Seven Little Egrets fed on the tide edge, more than has been present this year, and 4 Canada Geese were also on the shore early in the day. Ringed:- 1 Linnet
(DB,CJ,CDT,PT,NDW,SRW,TGW) [342-35] photos CJ
Posted by Colin at 11:47