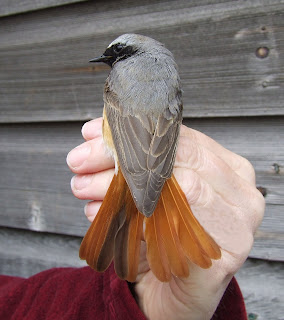 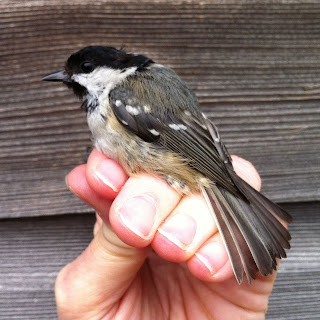 It was a day of varied weather conditions ranging from a minor westerly, almost nothing at dawn, through a downpour to beautiful sunshine with a near gale blowing. Even in these conditions 2 new species for the year were ringed, a Coal Tit (less than annual at Hilbre, above left) and a beautiful male Common Redstart (above right). Also today were 2 Greenland Wheatears (right), the first of this race to arrive at Hilbre following the smaller more local breeding examples seen thus far. A 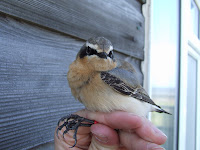 Grasshopper Warbler was found skulking in the 'newton' trap, and was discovered not to be the bird ringed previously (below). The only small warbler ringed today was a Chiffchaff. A Sparrowhawk flew through the island with a couple of Swallows chasing it and a single House Martin was also seen. 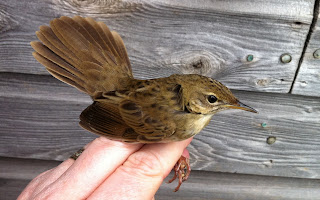 The female Blackbird of the pair suspected of attempting to breed (right) was trapped and ringed which means a check can be made on its progress. 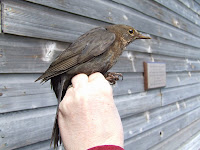 Still only 3 Brent Geese visible today so perhaps the others have already left for the breeding grounds. The 2 Greylags were noted again and are probably the same couple logged in the last few days, while a drake Common Scoter also showed. Ringed:- 3 Wheatears, 1 Coal Tit, 1 Chiffchaff, 1 Redstart, 1 Grasshopper Warbler, 1 Blackbird.(DB,JE, et al) [188-29) photos JE
Posted by Colin at 10:40