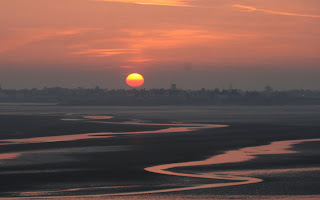 Another stunning dawn but today no overnight fall of warblers, although 3 Willow Warblers were caught together in the 'newton' trap. There was no visible migration except for a single Tree Pipit and the usual Goldfinches, even the Redpolls didn't show until one was found later in a mist net. 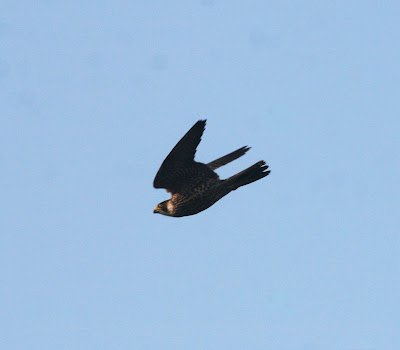 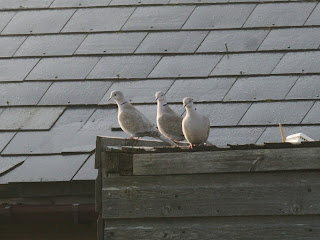 A pair of Peregrines gave a good display of communal hunting when they stooped unsuccessfully in turn on a Collared Dove over the centre of the island (above). Five Collared Dove were present today, and 3 of them stood on the obs water tank for a while. 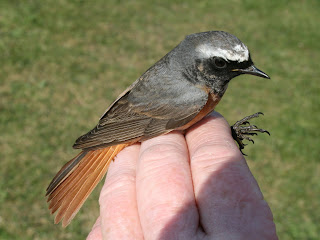 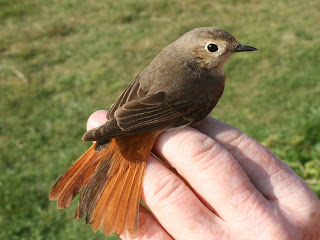 A female Redstart was found in the 'heli' trap and later a male was also trapped (above).Swallows were again in small numbers with 5 Sand Martins being logged and 8 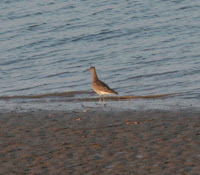 Greenland Wheatears were seen during the morning.There are not many waders still about apart from 200+ Dunlin, although the Purple Sandpiper (presumably the same as a few days ago) is still to be found at the north end at high tide.A Whimbrel was finally (poorly) photographed (right).
Ringed:- 4 Willow Warblers, 4 Linnets, 3 Goldfinches, 1 Lesser Redpoll, 2 Common Redstarts, 2 Greenland Wheatears, 1 Collared Dove, 1 Chiffchaff.
(DB,CJ,KMc,CJW) [279-32] photos CJ
Posted by Colin at 16:50