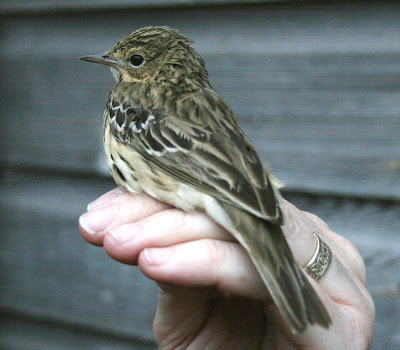 A little more mist this morning helped bring a few more birds to the islands with a dozen or so phylloscopus warblers, and a Blackcap in the trapping areas. A few Redpolls passed overhead early, the odd Goldfinch paid a visit and Wheatears arrived sporadically during the morning but failed to be in the right place to be ringed. Bird of the day was a Tree Pipit trapped in the 'newton' trap at first light (left), Tree Pipits are occasionally heard passing over at migration times but one being down on the island is quite rare, and it was instructive to compare a bird in the hand with Meadow Pipits which are handled all the time.

A House Sparrow (right) circled about for half an hour or so and landed briefly before deciding it was not to her liking, not so with the Linnets as more have arrived to take up territory, 4 being ringed today. Some Swallows passed through in small numbers, also 2 Sand Martins but no House Martins. 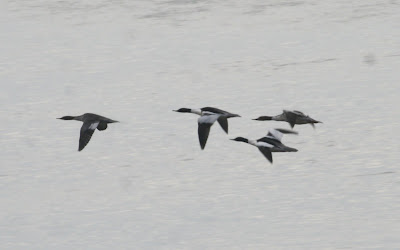 A male Goosander was seen early in the morning and later a group of 3 Goosanders with a female Merganser flew down the west side and across between the islands and off towards the shore (left). Goosander is still a rare visitor to Hilbre but you would not guess from the number of records recently. A Little Egret was the first to be logged for a while. 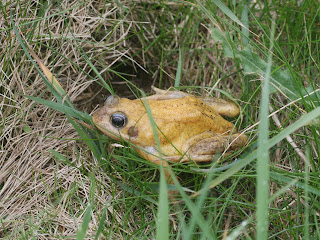