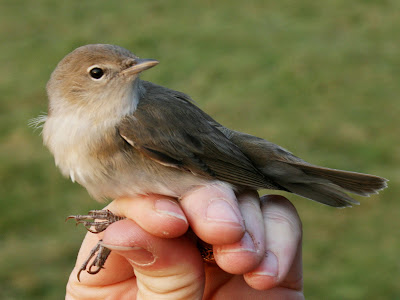 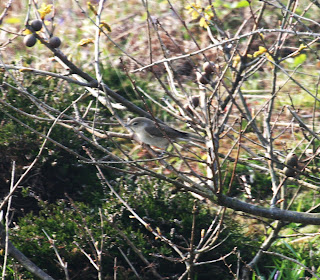 The southerlies and the morning mist combine again to bring new arrivals to the islands. Bird of the day was the earliest ever Hilbre Garden Warbler (above), the previous record holder was seen on 26th April 1993. Garden Warblers are an occasional spring and autumn migrant in very small numbers, and are always a welcome visitor, even sight records but especially birds ringed often make a birding day. Another first for the year was more expected at this time, 2 Sedge Warblers (below left) also newly arrived from Africa. A good passage of 25 Willow Warblers today (and 1 Chiffchaff) and a Grasshopper Warbler arriving at its peak 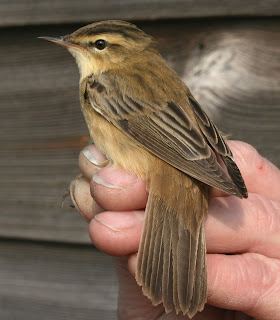 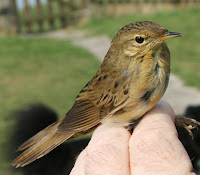 Tree Pipits also went through in good numbers (15), at least 2 of which alighted for a short 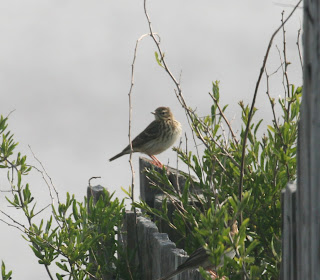 while (right), likewise some of the a small movement (100) of Meadow Pipits but none of the 5 Yellow Wagtails made it to the ground to be photographed. Wheatears did not follow the warblers example with only 2 birds seen. Goldfinches and Redpolls continued their recent upsurge of numbers passing through the islands. Swallows flowed through mostly in singles also a House Martin added variety. An excellent migration day such as we look forward to all winter.
Larger bird sightings included 4 Collared Doves, 1 Wood Pigeon, 5 Whimbrel, a single Bar-tailed Godwit in summer plumage 2 Little Egrets and a Fulmar prospecting the island as often happens in spring but always without a result.
Ringed:- 17 Willow Warblers, 1 Chiffchaff, 2 Sedge Warblers, 1 Garden Warbler, 1 Grasshopper Warbler, 3 Redpolls.
(DB,JE,CJ,KMc,MGT+2,CJW, et al) [304-34] photos CJ
Posted by Colin at 16:46

Hello
Different world! - awful at Heysham today & was contemplating not getting up at 0415hrs tomorrow. Your post has renewed the enthusiasm!

Hope the rest of the spring goes well