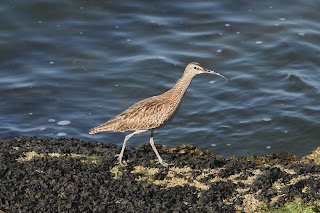 Eight Willow Warblers and a Chiffchaff were ringed this morning during a fresh easterly wind which later strenghened and killed any migration. The sea was good considering the wind direction with an Arctic Skua the highlight but also featuring 77 Sandwich Terns, 21 Common Terns, 2 Gannets, a Red-throated Diver and 3 Common Scoter. Six Swallows and 2 Wheatears were noted, then in the afternoon right on cue the first 2 Swifts of the year were over the island. 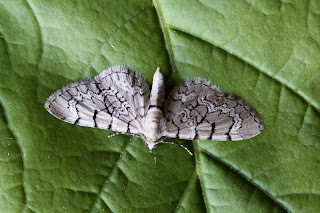 The moth trap revealed a Netted Pug (right), another scarce species for the island which was 'twitched' from the mainland by a member interested in photographing the moths ! Also obtained was a superb photograph of one of the Whimbrels around the rocks (above). Ringed :- 8 Willow Warblers, 1 Chiffchaff.(BSB,JE,PGR,CDT,PT,NDW,SRW) [358-35] photos BSB
Posted by Colin at 20:10