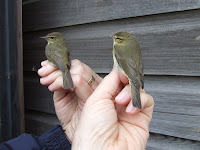 The North Westerly airflow continued overnight and first thing this morning, but observers 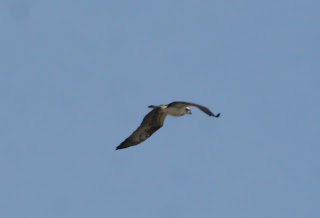 staying on the island were not to be put off and the arrival and capture of single Chiffchaff and Willow Warbler (see left respectively), the former singing, lifted the spirits. 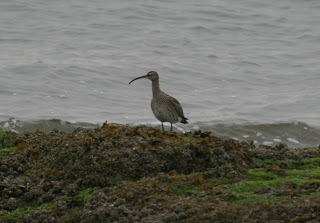 However, things were fairly quiet again until midday when an Osprey (above right) was spotted from the Obs garden flying east over the island and off towards Red Rocks. It then circled inland before drifting south over the Wirral. 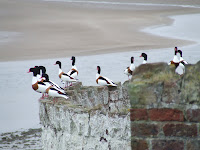 Passage waders continued to appear around the islands with 3 Whimbrel (see above left), 500 Dunlin and 25 Ringed Plover noted. The two Little Egrets were again dancing in the gutter following the tide out this morning and then following the tide back in this afternoon. The summer resident Shelduck were in good voice this morning and as usual displayed from various prominent points on the island (see right).