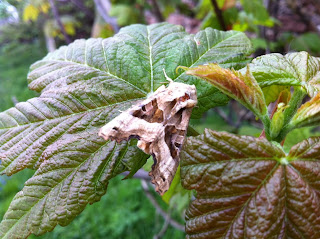 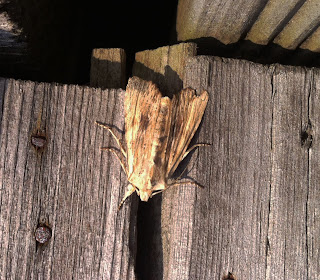 Quiet again today, cold at first and a good breeze from the north east, but later the wind dropped light, the direction swung right around the compass to end up from the north west, the sun came out and the day became warm. Not much to show for all the mornings effort, just a single Wheatear and a single Willow Warbler plus a few Goldfinches to be found. Swallows continue to pass in small numbers although House Martins have been very scarce so far this spring and we still await the first Swift of the year. Five Gannets sat on the sea and 35 Sandwich Terns dived for food, with no other significant sea birds noted. Our old friends the 2 Greylags flew back and forth across the shore to the west of the islands, there are still a few hundred Dunlin flocking on the shore and 5 Little Egrets were noted on the ebb tide. After the 22 Whimbrel some days ago, surprisingly we now seem to be have only on about 5 birds at the moment.
With more time on our hands than usual the overnight moth trap became one of the days 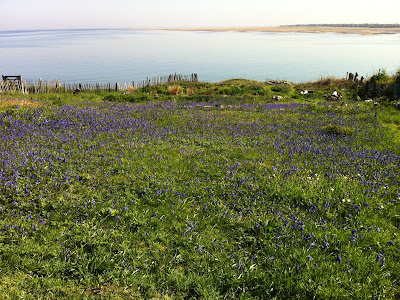 highlights, and when examined it produced amongst others the fairly common Angle Shades (above right) and a Pale Pinion (above left), a moth that is rare at Hilbre and indeed has not been recorded here since 1970.
The conservation area next to the obs was a splendid splash of colour today with Bluebells benefiting from the clearance of bracken this last few years (right).
Ringed :- 1 Willow Warbler, 1 Wren.
(CJ,CDT,PT,NDW,CJW,SRW,TGW) [349-35] photos SRW
Posted by Colin at 17:26