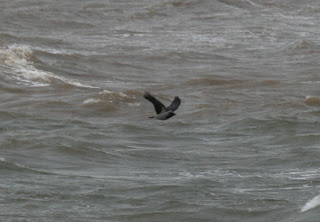 A Hooded Crow flew in from the east mid-morning (left), landed briefly on Middle with the local Carrion Crows

(see right) then went up the west side of the main island, again landed briefly (see below) before returning to Middle and disappearing over the south end of that island. Hooded Crow is a rare species at Hilbre and is far from an annual visitor. 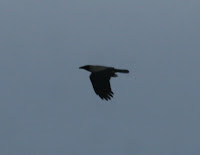 The other highlight of the day was a very early Common Sandpiper seen at the south end of the main island as the tide was dropping. There were several small groups of Teal hanging around today, the largest being one of 15 birds. Ot 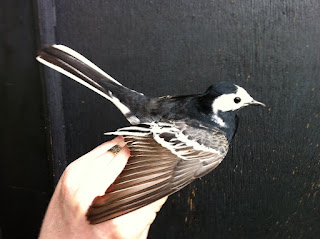 her wildfowl included a pair of Wigeon and 3 Canada Geese. A Merlin continued to show on the island. Small migrants were few, the 75 Meadow Pipits were a decrease on recently, a Coal Tit was the most unexpected, less so was a Chiffchaff and 2 Swallows. The now dependable Goldfinches (11) as usual made in into the log, but little else. A high tide sea watch produced 200 Little Gulls, 50 Gannets, 20 Red-throated Divers, 9 Kittiwakes and 3 Sandwich Terns.