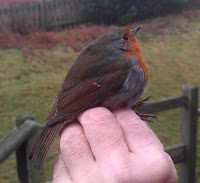 A post- Christmas visit this morning found that mostly the traps had survived the gales and things were in fairly good order for 2012. An accurate count of the Brent was not possible but they seemed to be in excess of 250 off the west side of the island. Only 4 Purple Sandpipers could be found but no doubt more could have been seen nearer to high tide. A male and 2 female Pintail flew west passed the north end mid-morning as a Shag floated on the tide edge. Bird of the day was undoubtedly a Twite recognised by call amongst a flock of 18 Linnets that went back and forth over the obs to and from Middle, a very rare record for Hilbre. Land birds included 5 Blackbirds and 2 Song Thrushes, all probably staying for the winter, also a Robin (right) that was trapped and seemed to be in very good condition judging by the weight and fat stored on the bird. Most of the regular waders were present, and several flocks of Knot were noted, also 5 Bar-tailed Godwits.
(JE,CJ+1,CJW,PSW, RTW,DGW)     photo Danny Burnett
Posted by Colin at 14:25 No comments:

A quick visit found 3 Peregrines hunting the main island, a juvenile Kittiwake on the sea and a Shag.
(DB)
Posted by Colin at 18:01 No comments:

Christmas eve produced 2 flocks of Pintail, 43 flying south and later 105 south west, and travelling in the same direction 5 Wigeon. Four Golden Plover was a good find at this time, but a less pleasant sight were an oiled Gillemot and Common Scoter found dead on the shore.Purple Sandpipers were counted at 18, while watching the north shore produced 10,000 Knot and 400 Bar-tailed Godwits.
(DB)
Posted by Colin at 17:55 No comments:

The blog is being updated with sightings since 4th December 2011 - please see below. Apologies to our readers it has been a busy time for the bloggers. Coverage as ever has been tremendous and good records continue to the year's end ... perhaps our best ever? News of some more ringing recoveries to follow soon.
Posted by Hilbre Steve at 19:22 No comments:

passerines about but a new Blackbird was caught and ringed (see below left); showing that new birds are 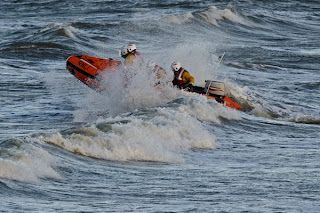 still arriving on the islands.
The Inshore Lifeboat spent some time carrying out exercises off North End (see right) which was a welcome distraction to observers from the cold wind (as were the mince pies back at the Obs!).

Only 112 Brents today but they included two Dark-bellied birds. A juvenile Herring Gull was also photographed cracking mussels by dropping them onto the rocks - not untypical behaviour at Hilbre. 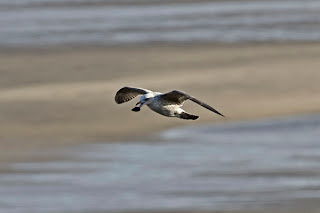 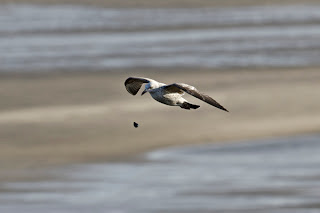 A brief visit produced an excellent count of 630 Curlew in the Little Eye/Tanskey Rocks area on the flood tide. Up to 7,000 Knot and 4,000 Dunlin were also counted along with 7 Grey Herons, 25 Pintail and a single Black-tailed Godwit passed west meanwhile a single Peregrine occupied the large numbers of waders on the East Hoyle sandbank.

(DB briefly)
Posted by Hilbre Steve at 19:10 No comments:

2,000 Cormorants were counted today no doubt the continuing gales is having an impact on their numbers in the estuary. Sadly the gales produced one casualty found on the East Hoyle sandbank in the evening - a dead Great Northern Diver. A single Peregrine battled against the wind but it was generally a quiet day but 3 Red-throated Divers, a single Gannet, 60 Common Scoter and 4 Guillemot were also seen. A single Little Egret was again present.

Three hundred and eighty five Cormorants flew out of the river at first light but a realistic number seen during the day was at least double this with birds seemingly everywhere. The birds fishing close in appeared particularly successful, despite the blustery westerly wind, but were less so in defending their catches against the marauding Greater Black Backed Gulls. The good fishing also attracted 10 late Gannets (all adults), along with the more expected 19 Red-throated Divers and 18 Great Crested Grebes. Brent numbers were difficult to count accurately due to birds being so well spread out before the tide but the best count made was an impressive 216. Some 500 Scoter were constantly taking flight in the vicinity of the wind farm, with some closer in, but no sign of yesterday's Velvets. Four Kittiwakes & three Guillemots passed by. One Little Egret fished the gutter prior to the tide. At least eight Purple Sandpipers appeared at the North end rocks after the tide. Passerines were few & far between with a couple of unringed Blackbirds possibly new in and an unidentified lark flying towards Point of Ayr creating an unsolved mystery!
(CS,MGT+KD)
Posted by Colin at 10:24 No comments: 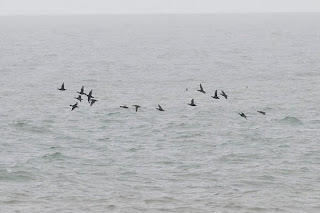 2000+ Common Scoter (see left) were congregating off the west side between Hilbre and Point of Ayr, the highlight of the mo

rning was a pair of Velvet Scoter which flew west then just before midday 3 more drake Velvets were spotted. Other birds included 6 Red-throated Divers, 38 Great Crested Grebe and 2 Gannets on the sea (below left). The Shag (above) was roosting on cliffs below the light and 9 Purple Sandpipers included 2 roosting above the tide gauge (below right) and 7 in Niffy bay. 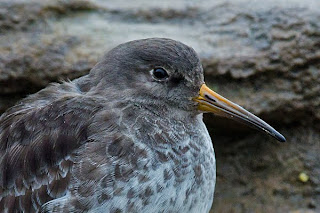 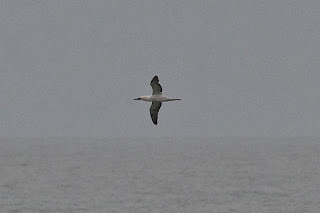 (PSW) All photos PSW
Posted by Hilbre Steve at 11:47 No comments:

The first real feel of winter today with lightning, hail and sleet along with a north westerly gale force 8 at times. Early morning highlights so far include drake and duck Long-tailed Ducks in the gutter on the flooding tide and a female Velvet Scoter flew west off the North End. However, the good records continued throughout the day with seawatching prominent - 6 Red-throated Divers, 40 Great Crested Grebes, 2 Gannet, 50 Kittiwakes, 200 Common Scoter, 5 Red-breasted Mergansers and 3 Wigeon noted and later a single Little Gull appeared below the Obs.

Waders were also notable with 14 Purple Sandpipers, 230 Turnstone, 75 Redshank, 75 Bar-tailed Godwits and 14 Grey Plover counted around the islands being harassed by a single Peregrine. Other noteworthy records included s single Little Egret and a dawn flight of 1,975 Cormorants out of the estuary.

Waders were much in evidence today with at least 9,000 Knot, 6,000 Dunlin and 376 Curlew counted as well as a good count of 35 Grey Plover and 10 Purple Sandpipers. It is interesting to note double figure counts of the latter along North Wirral (particularly New Brighton) and the North Wales coast.

Other birds of note today included 30 Great Crested Grebes, single Gannet and Shag, two each of Kittiwake and Guillemot and 5 Red-throated Divers. Finally the Snow Bunting was still present.

The highlight of the day was a record count of 209 Pale-bellied Brent Geese (despite being disturbed by a helicopter!). On the sea 2 Great Crested Grebes, 2 Shag and a single Gannet were seen and a nice adult winter Mediterranean Gull flew north east off the North End. An unringed Rock Pipit was present as was the Snow Bunting still in the South Cove. An impressive count of 1,857 Cormorant added to a good day all round with a single Peregrine making an appearance.

A westerly gale and driving sleet and rain showers produced more good records for the time of year. Undoubted highlight was another late Leach's Petrel passing the North End other highlights included 22 Gannets, the Shag again off the North End and 6 Golden Plovers.

The Snow Bunting was still present on a rough morning which produced yet two more Bonxies which passed west together off the North End. Other highlights included a single Pintail and 2 Little Egrets.

There is always something to see and do at Hilbre even in December which brings its own surprises ... A blustery day st

arted well with 7 Pintail passing by (see below right) and a sea-watch producing 30 Kittiwakes (juvenile below left), 3 Red-thr 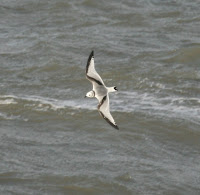 oated Diver, a single female Scaup and a Shag (below centre)

which spent some time just off the North End. Frustratingly a shearwater species was seen at distance but could not be specifically identified (any species of shearwater is very rare at Hilbre in Winter). A Snow Bunting appeared briefly near the 'Khyber Pass' but was not relocated until later in the afternoon (see below). A good count of 138 Pale-bellied Brent Geese plus 3 Dark-bellied birds added to the good wildfowl day but attention again turned to sea-watching around lunchtime with the wind increasing and the tide on the turn. 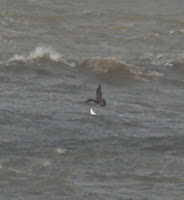 omarine Skua flew in from the West, harrassed some gulls that were milling about off the North End and then headed back west before ditching in and being lost from view (left and right -you can just make out the double wing flash on the righthand shot). This was soon followed by a Bonxie, again heading west, and an increase in Gannets with at least 32 seen today. The Snow Bunting was then relocated at the South End were it fed in the South Cove on the tideline debris for the rest of the afternoon. 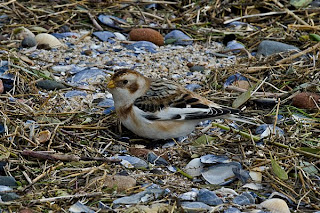 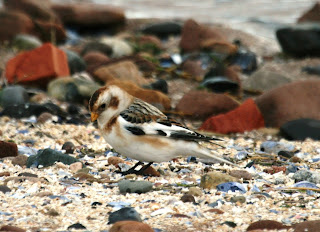 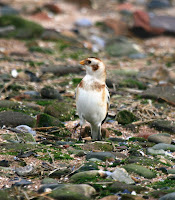 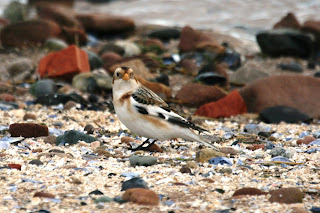 However, despite all this excitement the highlight of the day for all present were the appearance of visitors Rachael and Chris (who unknown to Rachael had brought surprises)...whilst the blustery wind brought seabirds close in off the North End and the Brent Geese and a couple of Purple Sandpipers fed happily on the slipway below, Chris proposed to Rachael at the North End - fortunately she said "yes" - and the sun came out and produced a beautiful rainbow above their heads (see below). Surely a good omen for their future. 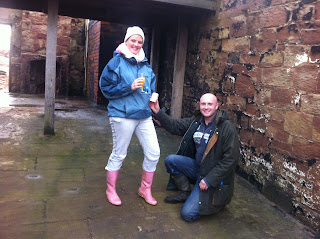 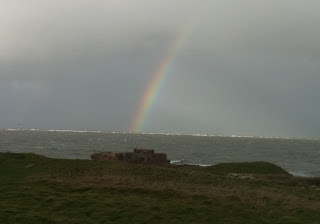 Congratulations from everyone at the Obs! They even had time for a quick look at the Snow Bunting on their way off the island to tell their families and friends their wonderful news.

Posted by Hilbre Steve at 17:16 No comments: