Weather: cloudy, no wind
The 2 Scaup were still on the sea and 34 Common Scoters were also noted. Good counts were made of 1,200 Dunlin, 42 Bar-tailed Godwits and 160 Redshank.
Posted by Colin at 14:00 No comments:

Weather :  WSW force 2, later W 4
Highlights of today were 2 Scaup on the sea and a Golden Plover. Wader counts included 5,000 Oystercatchers, 35 Bar-tailed Godwits, 800 Dunlin, 140 Curlew, 120 Turnstone, 4 Ringed Plover and 2 Purple Sandpipers. Around the islands were 205 Brent, 3 Little Egrets and 3 Grey Herons. Two Rock Pipits were the best of the small birds.
Posted by Colin at 13:56 No comments:

Weather: SE force 1/2   heavy frost early
Two hundred and six Pink-footed Geese were found roosting on the north shore at first light, they soon took off and headed south east. A Long-tailed Duck was found on arrival, flying off passed the main island,
and a Raven flew around Middle and later returned to the island to give close views (below, AEH). 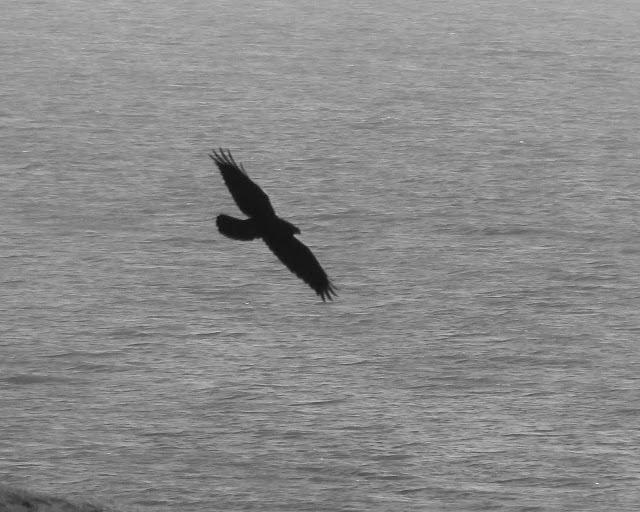 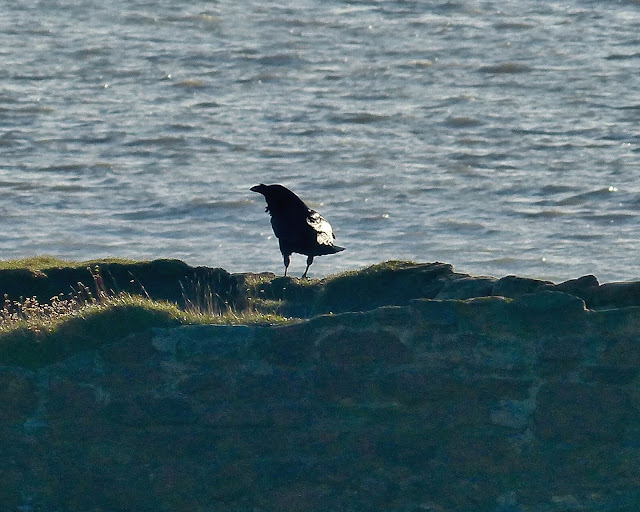 The male Scaup was on the sea, and also seen was a drake Wigeon, a pair of Mallard (below,AEH), 2 males and a female Common Scoter, 10 Shelduck and 4 Great Crested Grebes. 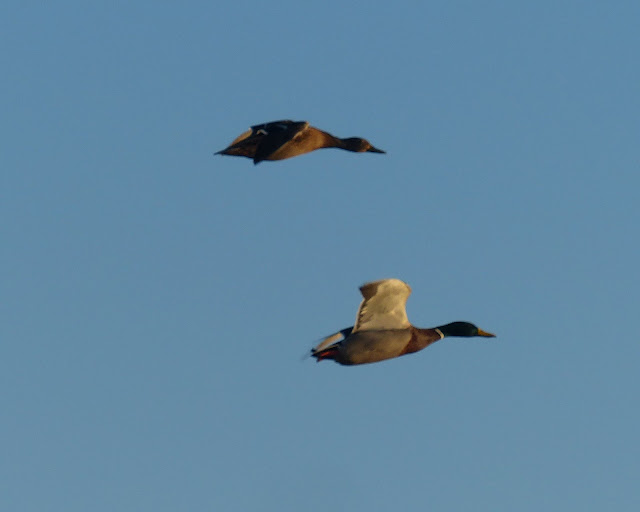 Counts on the east hoyle flood tide were as follows: 340 Grey Plover, 280 Curlew, 1,000 Knot and 12,000 Dunlin. A unusual record was of 6 Barnacle Geese flying south west, south of Middle Eye. A Jack Snipe was at the edge of the spartina on the West Kirby/Hoylake shore (in the Hilbre recording area).
Posted by Colin at 14:15 No comments:

Weather: S  with large bank of fog from Tanskys to Hilbre. 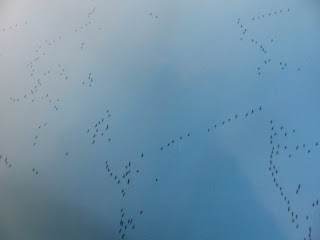 Noted from the West Kirby shore were many different flocks of Pink-footed Geese (right) and a Shoveler flying west. 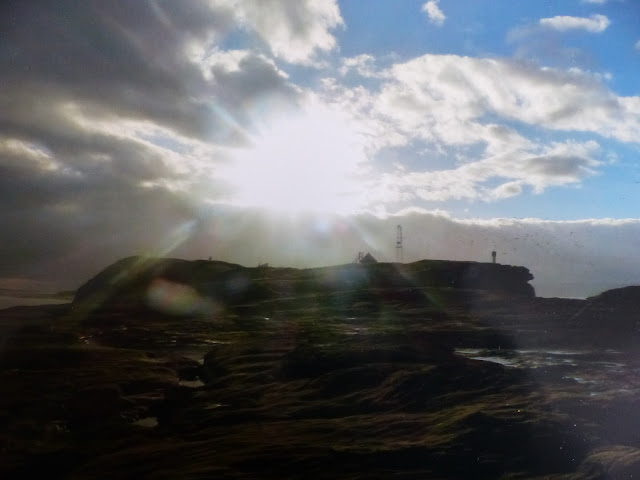 A brief visit during which 200+ Pale-bellied Brent Geese were counted on the whaleback and the north shore, including two colour-ringed birds.

Also on the north shore were c600 Bar-tailed Godwit, 170 Dunlin, 9 Grey Plover, 87 Redshank and 27 Curlew. The Scaup was still off the North End.

On the way off a Little Egret flew between the islands and 20 Ringed Plover were east of Middle Eye.

Posted by Hilbre Steve at 21:48 No comments:

The Scaup was again off the north end and 62 Common Scoter were further out.

The Brent Geese were mainly on the whaleback and were counted at 120.

A Pied Wagtail was at the north end, 3 Rock Pipits were around the island, also a Meadow Pipit, 6 Wrens, 2 Robin and a Dunnock.  A Little Egret and 2 Grey Heron were also noted.

A single Atlantic Grey Seal was hauled out on a ledge on the west side of the north end, with no way off until the tide rose again!

Posted by Hilbre Steve at 19:20 No comments: 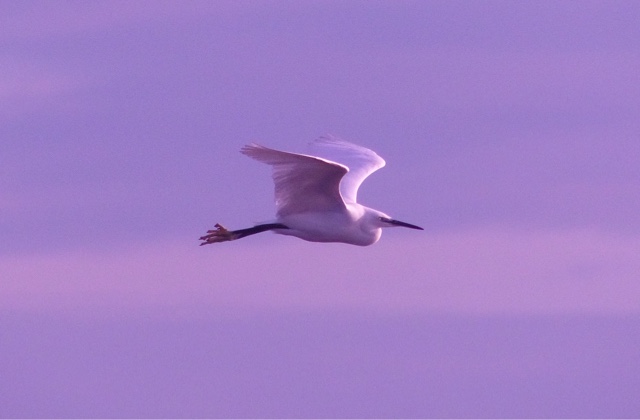 The drake Scaup has reappeared off the island (see below). 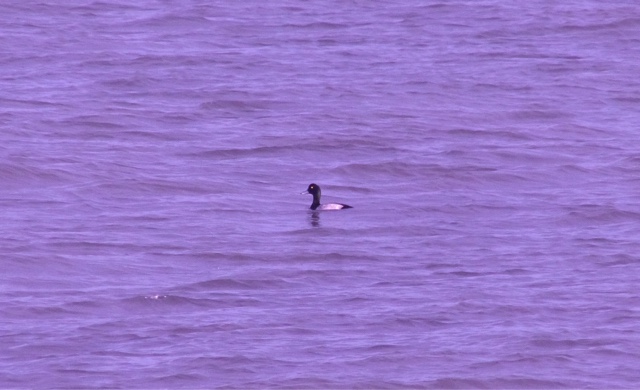 The only 'migrant' today was a Skylark passing through. Many parties of Sanderling flew east passed the north end as the flood tide moved them from north Wales towards the north shore, 800 was thought to be the total involved.
Over a hundred Brent (including a dark-bellied) were around the islands although at least twice that number are thought to be in the estuary. 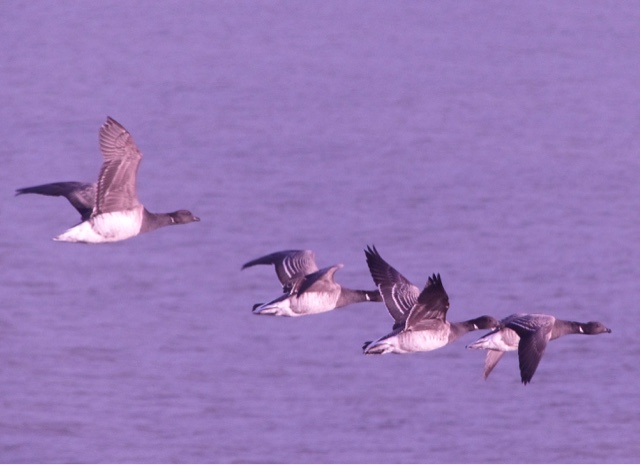 Both Blackbird and Rock Pipit were logged in this short pre-tide visit.
Posted by Colin at 15:59 No comments:

Weather: SE force 2/3
A Fieldfare was noted today and 2 Skylarks flew east, and from the spartina off the mainland (but in the Hilbre recording area) both a Common Snipe and a Jack Snipe was flushed. Excellent counts made today at the ebb tide included 630 Grey Plover moving north east, 158 Bar-tailed Godwits on the north shore and 250 more flying east, 4,500 Knot and 12,500 Dunlin. Three Little Egrets were on the shore.
Posted by Colin at 15:45 No comments:


At dawn a constant stream of Cormorants leaving the estuary were estimated to total over 1,000 birds and a female Peregrine was disturbed and flew down the west side of the island.
Over tide 142 Curlew roosted on middle with a Grey Heron and 7,000 Oystercatcher were around the islands. On the west side were 13 Purple Sandpiper, 130 Turnstone and 2 Ringed Plover. A Red-throated Diver was observed flying off the north end. After tide 45 Redshank were feeding in the gutter with a single Grey Plover.
Singles of Rock and Meadow pipit, Crow, Dunnock and Blackbird were on the island with 3 Robin and 3 Wren. Fourteen Starling flew up the estuary.
Of note is the fact that no Brent geese were to be seen around the islands in the last 2 days.
Fresh fox footprints were in the sand at the south end.

Weather: NW 4, later WNW 2/3
Roosting at high tide were 7 Purple Sandpiper and 145 Turnstone, while counts from the ebb tide included: 80 Grey Plover, 40 Ringed Plover,7,000 Knot and 5,000 Dunlin. A Peregrine was at Middle Eye and a Kittiwake was found at sea together with the more expected 60 Common Scoter, a Great Crested Grebe and a Guillemot. Small birds on the island included 4 Wrens, a Blackbird and a Rock Pipit.
Posted by Colin at 15:36 No comments:

Weather:  SW force 3
The male Scaup still resides off the island. Cormorants leaving the estuary at dawn numbered 582 this morning and wader counts from the east of the island were 48 Grey Plover, 50 Curlew, 70 Redshank and 58 Bar-tailed Godwits. A Rock Pipit was on Middle Eye and also on the main island.
Posted by Colin at 15:25 No comments:

Weather: SW 3, later NW 4,  some drizzle after rain overnight
A Goosander was seen flying into the marine lake from the direction of Little Eye. On arrival at the island a Snow Bunting flew west across the track onto the island and spent the rest of the morning on the rocks below the same area. 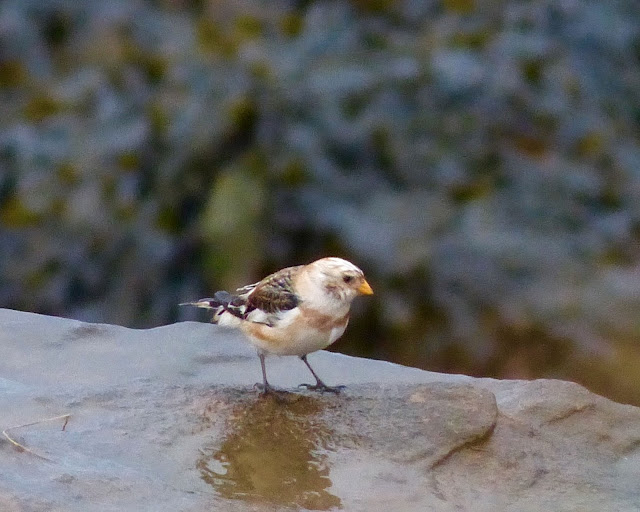 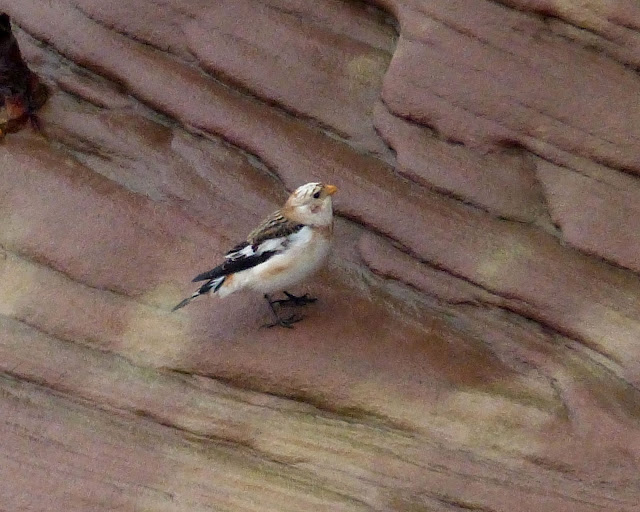 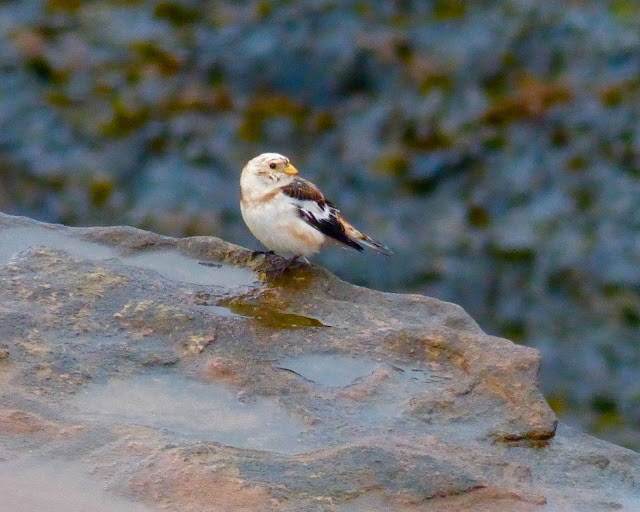 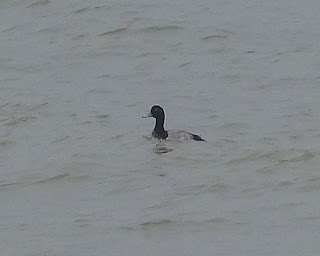 A Grey seal was hauled out at the north end although it seemed as though it was not too well.
A flock of 30 or so Bar-tailed Godwits flew about the north shore, while the male Scaup was off the north end again (right).

Weather: SE force 2/3, later SW force 4,   some mist
The Scaup still floats near to the island, 7 Purple Sandpipers were counted and 2 Rock Pipits were noted at the north end. A single dark-bellied bird was amongst the 200 or so Brent today.
Posted by Colin at 14:13 No comments:

Weather: SSE force 3/4
Eight hundred and five Cormorants exited the estuary at dawn. A single Lapwing was around the north shore, and in the same area were a large count of 682 Bar-tailed Godwits, also 68 Redshank, 60 Sanderling and 35 Grey Plover. The male Scaup is still about and the Brent numbered 227 today. A single Rock Pipit is still on the island.
Posted by Colin at 14:07 No comments:

Weather: E force 3
Two Red-throated Divers and 3 Great Crested Grebes were on the sea and there was a good number of 12 Purple Sandpipers on the island, while on the whole area from the north shore to bird rock and Little Eye counts of 12,000 Knot and 120 Sanderling were made. Both Song Thrush and Blackbird were present.
Posted by Colin at 13:59 No comments:


Three different colour ringed Brents were noted this morning and the Scaup was still about the island. Three Redwings were present and a Fieldfare flew in landed briefly in the pittosporum bush before continuing off south over middle, 3 Starlings also flew south down the west side. A good total of 309 Bar-tailed Godwits were counted, also 3 Wigeon and 3 Little Egrets, while on the sea were 800 Common Scoters, 6 Red-breasted Mergansers and a single Red-throated Diver. 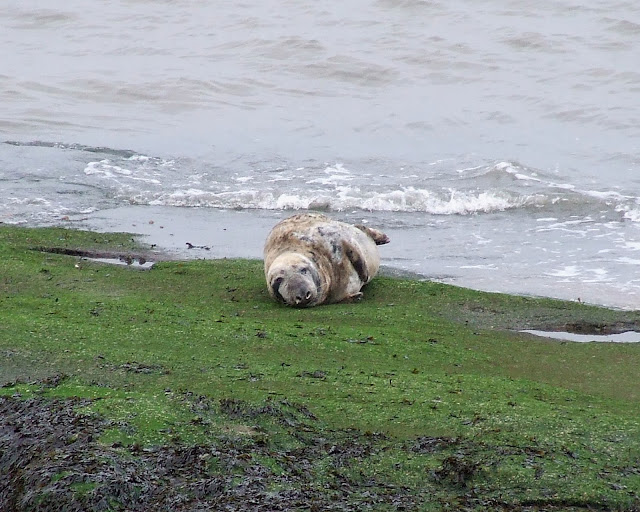 A Grey seal was hauled out at the north end (above). 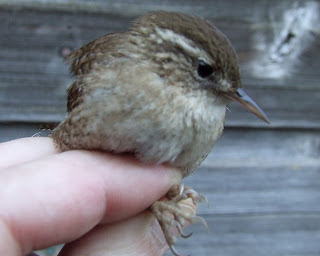 photos JE
Posted by Colin at 11:34 No comments:

No wind with excellent visibility, snow could be seen on the hills of the Lake District 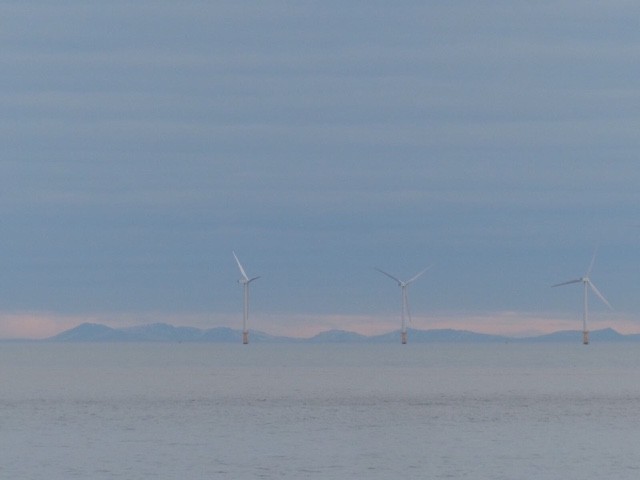 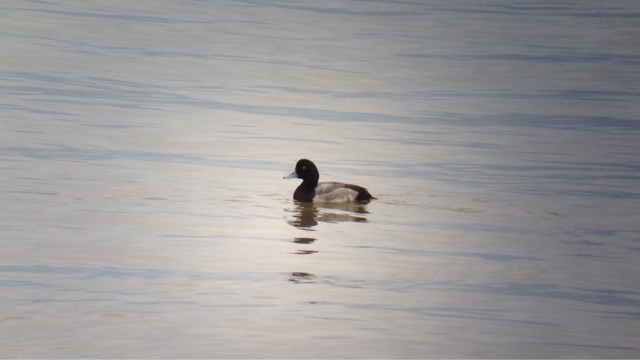 The Pale-bellied Brent Geese were too dispersed for a decent count but a returning colour ringed bird was found on the Whaleback.  This bird had first been seen at Hilbre on the near coincident date of 4th December 2015 (see blog for that date) and had been ringed at Álftanes/Jörfavegur in SW Iceland on 19th May 2015.  It was also seen in Northern Ireland in October/November 2015 before being seen at Hilbre in December but heading to Ireland (Dublin Bay) by 12th January 2016 (staying until February) and remaining on the east coast of Ireland (Co Wicklow and Co Dublin) until March 2016.  It was then seen in Iceland on passage in April & May 2016 before returning to Northern Ireland (Strangford Lough) on 22nd October remaining into November 2016 and finally returning to Hilbre. Thanks as always to the Irish Brent Goose Research Group. 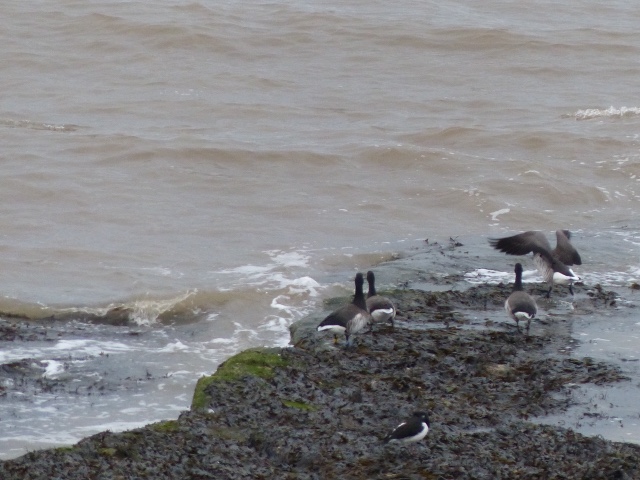 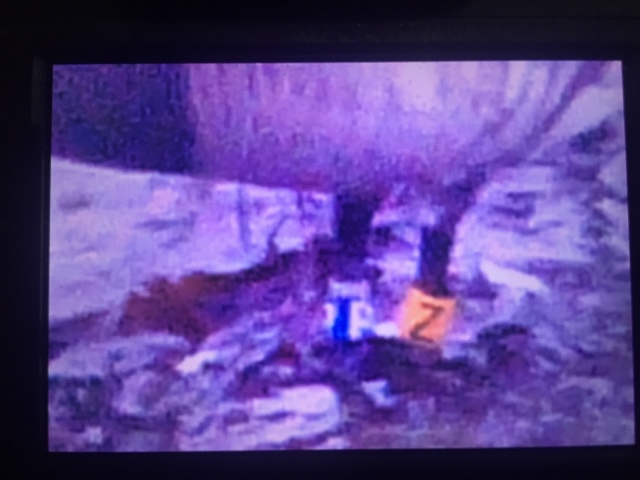 The drake Scaup spent its fifth day around the island. On the north shore were 141 Bar-tailed Godwits, 4 Grey Plover and 200 Dunlin with another 100 flying south up the estuary. About 3,000 Oystercatcher roosted on middle but there were only 6 Purple Sandpiper on the west side of Hilbre today. 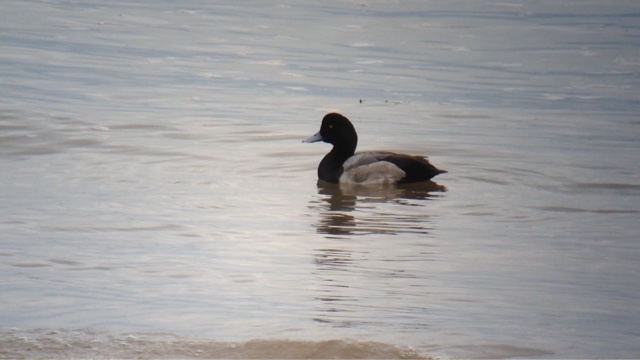 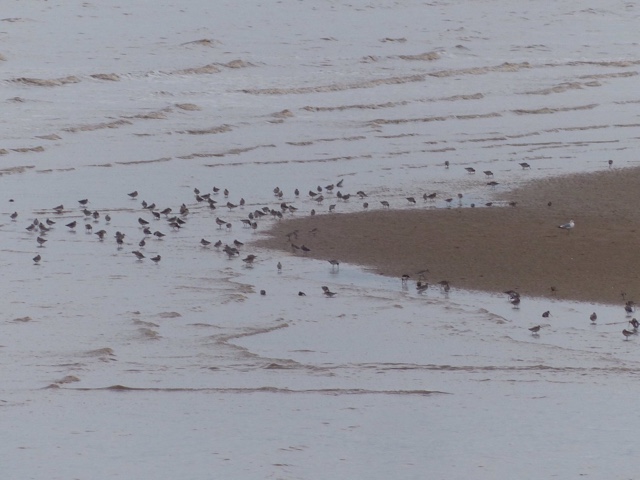 On the sea were c1,000 Common Scoter, 3 Red-throated Diver and 14 Great Crested Grebe.

A Blackbird and 2 Redwing were about the gardens early on with 5 Wren, 4 Robin and a Dunnock. A Kestrel was also about and a Pied Wagtail, 3 Rock Pipits and 2 Meadow Pipits were seen.

Photos by AEH and SRW

Posted by Hilbre Steve at 23:31 No comments:

Another quiet day on the island but the drake Scaup showed well off the east side on the rising tide and 10 Purple Sandpipers were roosting. 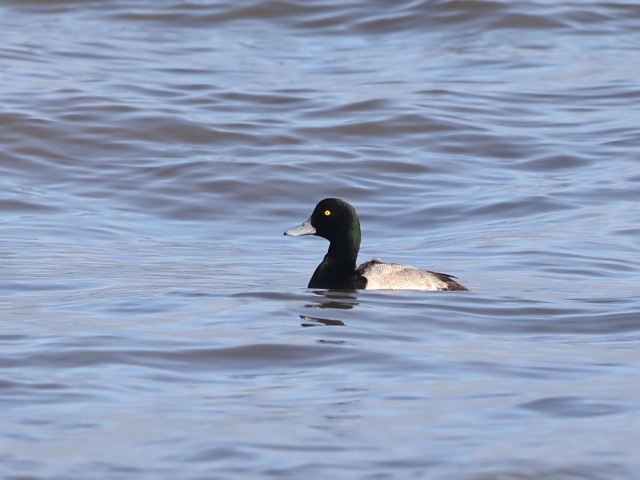 Photo of Scaup by @mattthomas966
Posted by Hilbre Steve at 23:07 No comments: