Weather: S force 2
A juvenile Whitethroat was grounded this morning, the first of the autumn, but was the only warbler to appear. There are at least 4 young Swallows fledged on the island, and several young Wrens were about the paddocks and the obs garden. A moulting adult Mediterranean was in the east gutter at the south end of the island, there have been several such records this last few weeks. Six Bar-tailed Godwits were on the east hoyle tide edge. Grey Seals numbered a healthy 502 hauled out on the west hoyle.
(DB)
Posted by Colin at 14:38 No comments: 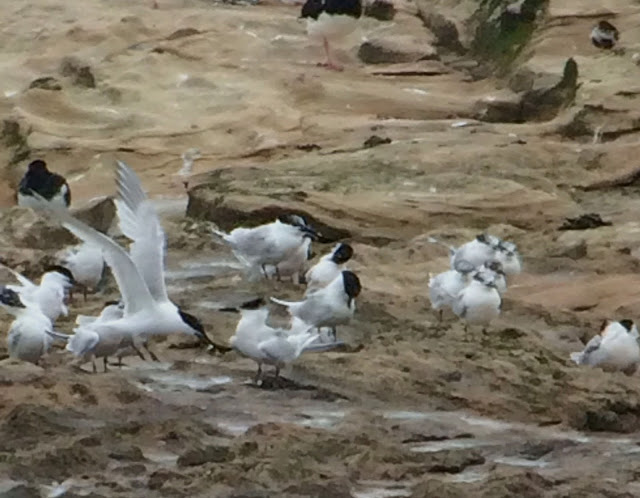 Two Arctic Skuas gave a nice display with the 1,000 or so Sandwich Terns (above), while at high tide a remarkable 200 Little Terns were feeding off the north end (below). Also at high tide were 50 Common Scoters, a Guillemot, 2 Great Crested Grebes, a Gannet and a pair of Red-breasted Mergansers. Waders today included 5 Whimbrel, 3 Bar-tailed Godwits, 100 Sanderling and 20 Redshank. For the second time recently a dead Common Seal pup has been found (above, DB), this seems to indicate that for the first time ever breeding attempts have been made locally by Common Seals. 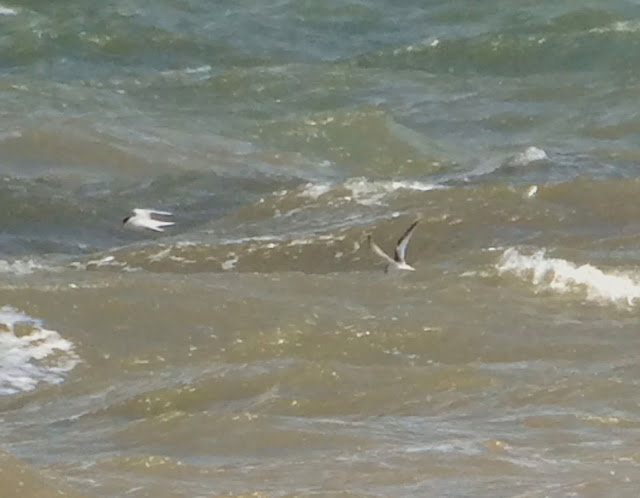 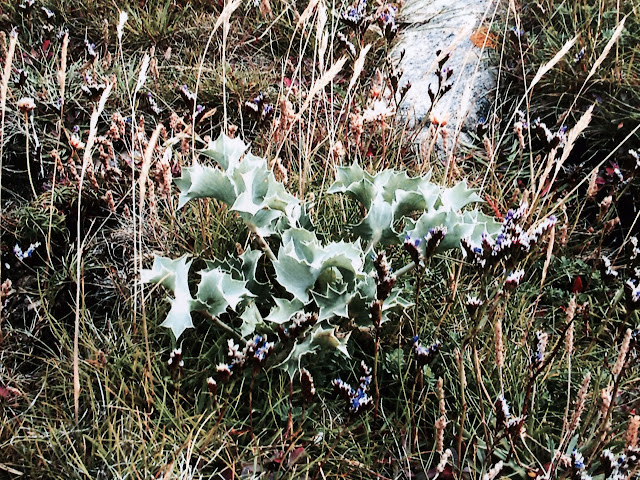 Weather: NW force 2/3, heavy rain early
A dark phase Arctic Skua was at Little Eye, 2 Red-breasted Mergansers were logged and between Little Eye and Tanskey rocks were 160 Curlew, 400 Dunlin and 284 Redshank.
(DB)
Posted by Colin at 10:34 No comments:


A Greenshank was between the islands this morning and a Merlin flew east. A Woodpigeon was also a visitor for a short time. Two early autumn Goldcrests were on the island and 7 Swifts passed through. 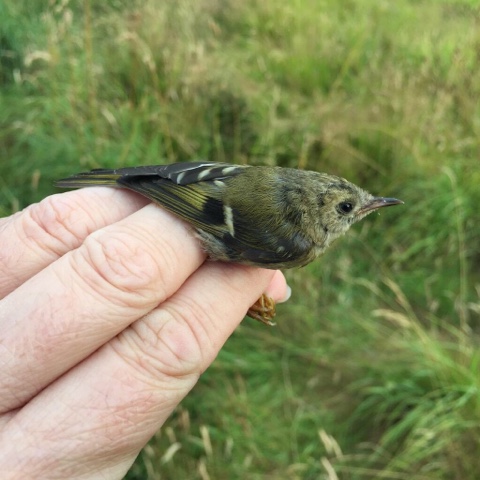 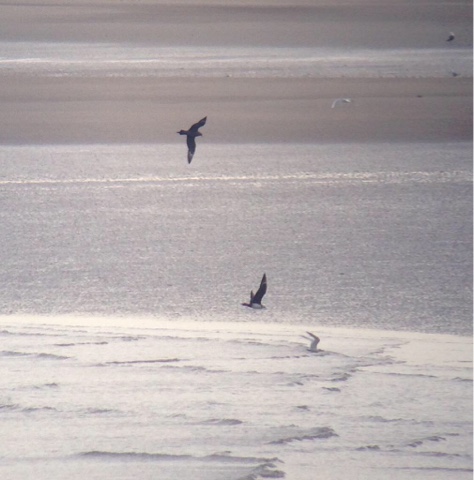 The Rock Sea Lavender is creating a lovely carpet of colour down the west side at the moment. 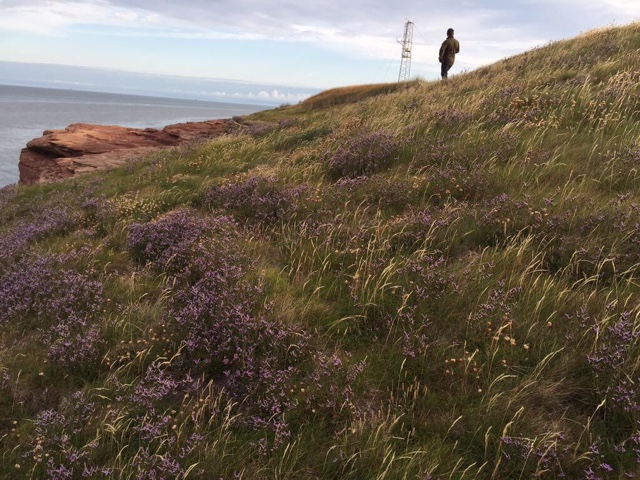 The exciting news from the island this week has been the sightings of juvenile Rock Pipits seen being fed by the adults near the North End and down the East Side and today visiting birder @tim_kinch got a lovely photograph (see below).  This is the first confirmed successful breeding of Rock Pipit on Hilbre for many decades. 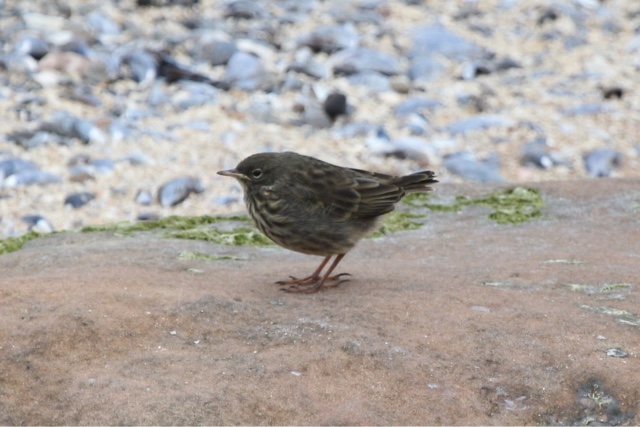 Also the first Willow Warbler of the autumn arrived.  Amazing how short summer is these days! 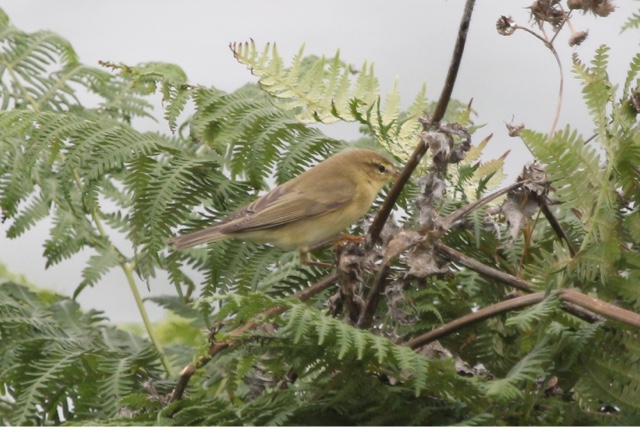 Also around the islands were 200+ Dunlin, 29 Turnstone, 8 Whimbrel and plenty of Meadow Pipits and a juvenile Wheatear again. 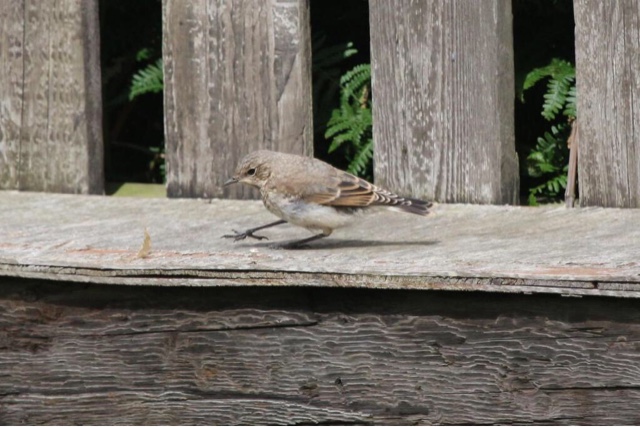 A single Bar-tailed Godwit and a Mediterranean Gull were by West Kirby Marine Lake.
(Tim Kinch)
Posted by Hilbre Steve at 21:47 No comments:

Weather:  SSW 3-4, 4/8 cloud, rain early on
Another nice July day with waders, terns and gulls very much on the agenda.
Passage waders included 12 Whimbrel, 2 Ringed Plover, 9 Turnstone, 3 Dunlin, 24 Sanderling and a single Bar-tailed and 20 Black-tailed Godwits; some of these waders were still in smart summer plumage.
The Sandwich Tern flock on the East Hoyle bank increased again with 980 counted along with 30 Common Terns.
A moulting adult Mediterranean Gull was again seen east of the main island on the shore with Black-headeds. 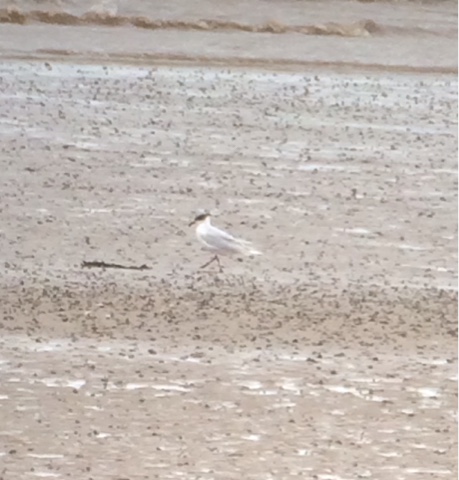 220 Grey Seals were noted and the harebells are flowering now.
(DB (briefly), AEH, CJW) photos AEH
Posted by Hilbre Steve at 21:06 No comments:

A short morning visit by Obs members produced juveniles of Robin and Dunnock and a lovely juvenile Wheatear was present on Wheatear wall but was chased off by the Rock Pipits. 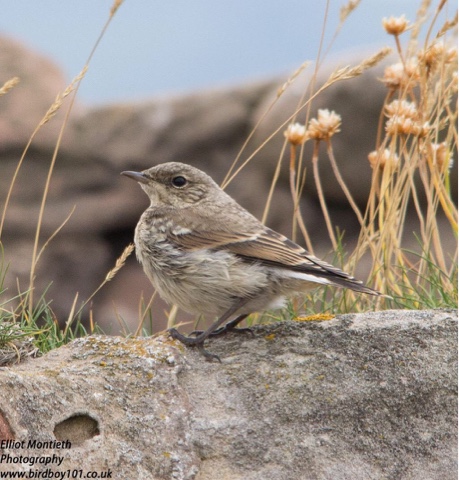 An immature Peregrine showed well at Little Eye (back of camera shot below) but from photographs appeared to be ringed with a red ring so perhaps an escaped falconer's bird? 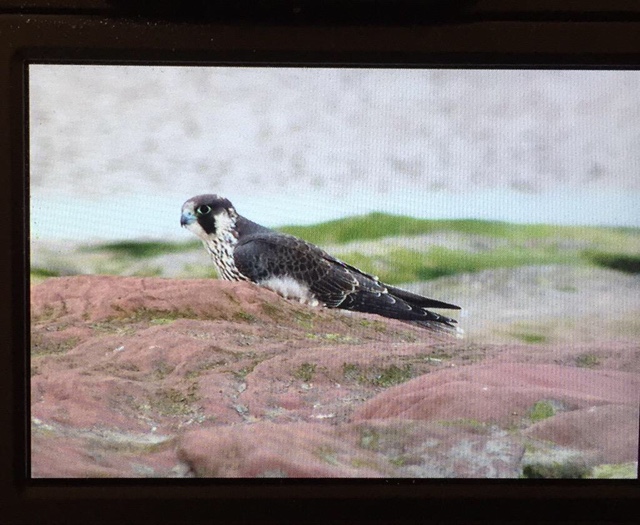 Visiting birder Elliot Montieth put the time in over the tide and was rewarded with some stunning views of early returning waders including Dunlin, Turnstone and Ringed Plover (see his blog www.birdboy101.co.uk for more). 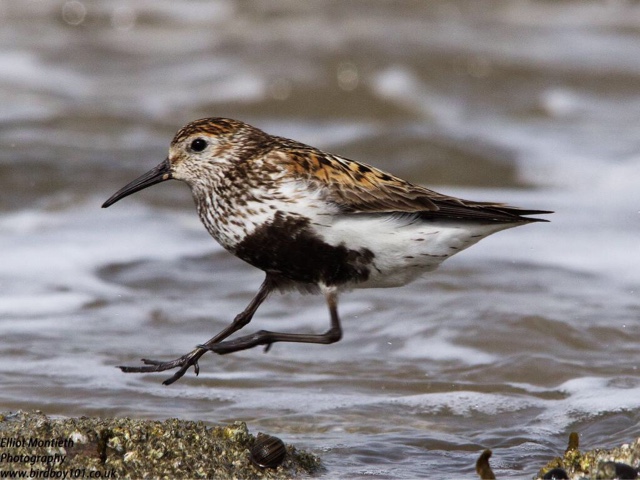 Another stunning adult summer Mediterranean Gull was found at the southern end of our recording area on the shore by WKML as the tide flooded. 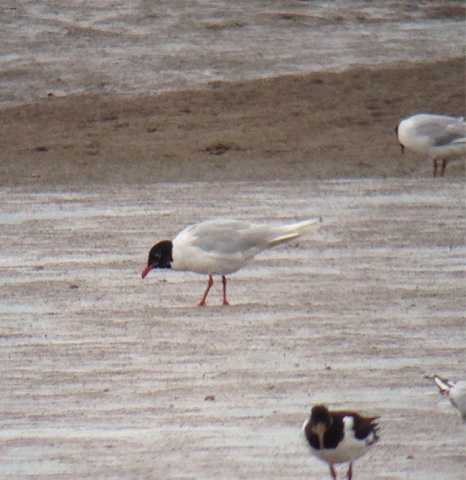 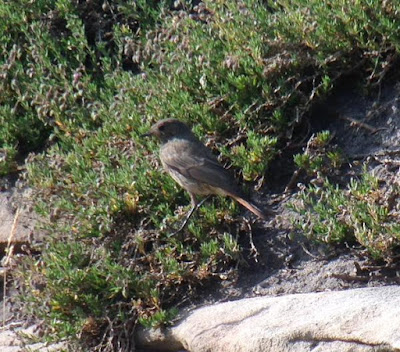 The juvenile Black Redstart is still present, ranging down the whole length of the east side of the island (left). Records of Mediterranean Gulls continue with two seen off the island today, and Sandwich Terns continue to increase at their post breeding roost on the east hoyle bank, 410 being counted today with 150 Common Terns also in the area. 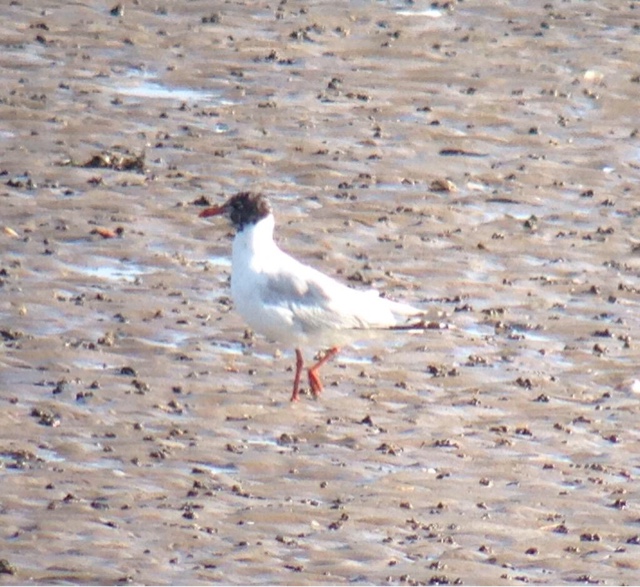 Two Rock Pipits are still to be seen as they have been for many months now, although no young have yet been recorded. Waders returning included 11 Bar-tailed Godwits, 7 Whimbrel, 60 Dunlin, a Turnstone and a Knot. 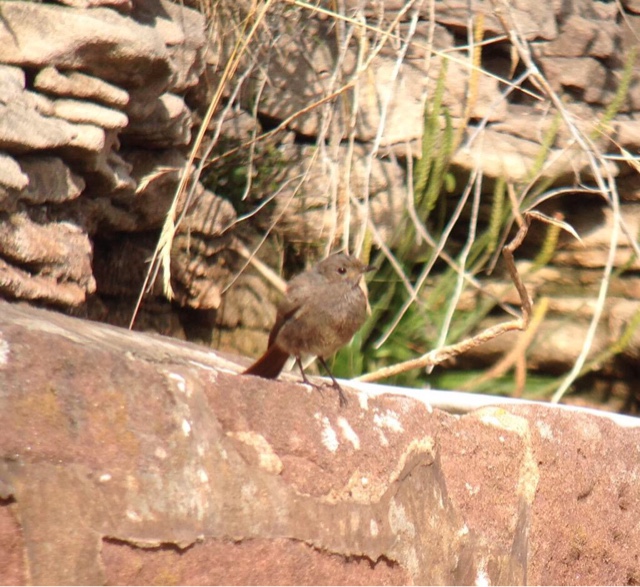 Weather: SW force 5
A Black Redstart was found this morning on the east side, it stayed throughout the day but was quite elusive, staying mostly down the east side cliffs, and not settling in one place for more than a few seconds. A sea watch produced just 49 Common Scoters, 2 Great Crested Grebes, a Guillemot and 2 Manx Shearwaters. Thirteen Whimbrel were more than would be expected in July, while 3 Sanderling, 2 Turnstone and 2 Knot (one in summer plumage) could be the start of autumn post breeding movements. The Sandwich Tern roost has increased to 360 birds, plus 25 Common Terns. Ten Swallows and 3 Swifts moving through were the only small migrants. The (same?) Mediterranean Gull was on the east side on the ebb tide. 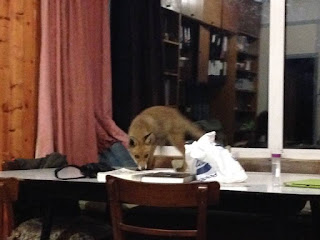 The most memorable event of the day for a member who was staying the night was the finding of a Red Fox inside the obs during the late evening! It has been known for some time that a Fox or Foxes are present but sightings have been more frequent lately, could it be they are becoming more bold ?
(GB,AEH,CJ,CJW)   photo GB

Weather: NW force 2, later SSE force 4
A nice passage this morning of 120 Swifts, 2 Sand Martins and about 20 Swallows. A adult Meditterranean Gull was again by the island, also a Black-tailed Godwit, while other wader records included 6 Whimbrel, 13 Redshank, 130 Dunlin, 2 Bar-tailed Godwits, 40 Curlew and a single Ringed Plover. Grey Herons just outnumbered Little Egrets by 4 to 3. Two Rock Pipits were confirmed as present today. The moth trap again produced good results with 63 Garden Tigers plus 27 other species. Bumblebees are not often studied but our expert found 7 different species on the island today.
(BSB,GB)

Weather: NW force 3
The Sandwich Tern roost built up to 260 birds, a Little Egret and a Whimbrel were logged,
(BSB,AAB,GB)

Weather: NW force 4
There was little time for birding today as the obs AGM took place on the island, however some Swifts went through, 3 Whimbrel, 2 Little Egrets and 4 Grey Herons were noted. Overnight a fine moth catch took place with 44 species identified by our moth and insect specialist. The most numerous moth was the Garden Tiger with 85 examples, not surprising considering the massive number of these caterpillers on the islands in the last few months.
(BSB,DB+ESCA,AAB,GB,AMC,FD,RAE,ME,JE,MJG,AEH,CJ,PGR,AS,CS,MT,NDW,CJW,SRW,PSW,AW)

Weather: SSE force 1/2
A brief visit noted butterflies including a Small White, a Small Tortoiseshell and a Red Admiral.
(DB)

Weather: WSW force 2
Twelve Swifts and a Sand Martin passed through, a Little Tern and a Kittiwake were noted on the sea. Buff-tip moths and a Hummingbird Hawk Moth were present, also Garden Tiger and Silver Y. The juvenile Robin showed itself.
(PSW)
Posted by Colin at 11:06 No comments:

Weather: SSE force 2/3
A Red Fox was out on the rocks to the eastern side of the island early this morning, it has been known for some time that a Fox has been present. A Southern Hawker dragonfly flew around the obs garden for a time. Over 40 Swifts went through today continuing the good counts of these birds lately. The west hoyle bank held an estimated 4,000 Herring Gulls, 180 Sandwich Terns, while Black-headed Gulls numbered about 350 with many juveniles, and 6 Redshanks were about the island. A Mediterranean Gull was again seen on the flood tide.
(DB,CJW)
Posted by Colin at 10:51 No comments:

Weather: SE force 2
A Jack Snipe flew in from the Middle Eye direction and then went east over towards the RL golf course, this is a rare bird for Hilbre. The first Grey Wagtail of the autumn also arrived on the flood tide and flew off to the south east. No less than 3 Mediterranean Gulls were between Little Eye and the marine lake as the tide approached. A single Swift and 8 Swallows were noted. Amongst the insects today were 2 Hummingbird Hawk Moths, and a painted Lady. The first Centuary of the year was flowering today. Forty Sandwich Terns rested on the esat hoyle as the tide flooded.
(DB), plus Richard Smith at Marine lake
Posted by Colin at 10:27 No comments:

Weather: SE force 5, dropping to 2/3
A large passage of about 300 Swifts went through this morning, quite unusual for Hilbre, also a House Martin, 6 Swallows and a Skylark. Insects also arrived in numbers with 80 Red Admirals, 25 Small Tortoiseshells, 2 Painted Ladies, 1 Common Blue, a Meadow Brown, a Gatekeeper and a Hummingbird Hawk Moth. An adult Mediterranean Gull was just east of Middle Eye. Eight Gannets were on the sea, and 35 Sandwich and 120 Common Terns were present. Following the first Hilbre orchid for many years last summer, 2 spikes of Common Spotted Orchid was found today in one of the paddocks. Juvenile birds of Blackbird, Dunnock and Robin were in evidence.
(DB,AEH,CJW)
Posted by Colin at 10:10 No comments: