A brisk WNW gale force 7 gusting 8 greeted  the intrepid Obs members who decided on a sea watch today. A Storm Petrel is a good 'summer' possibility in such conditions. With Manx Shearwaters streaming past Bardsey and news from Hoylake of good numbers yesterday expectations were high. We weren't disappointed. Manxies literally streamed past in small groups  sometimes coming quite close to the hide. 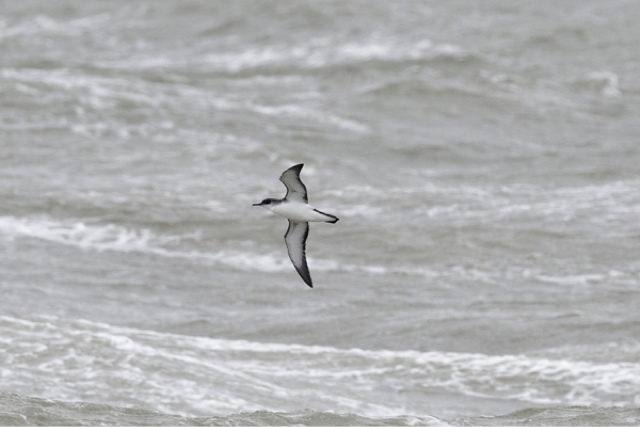 Gannets were also seen in good numbers and 5 Fulmars boosted the spring count for the year. 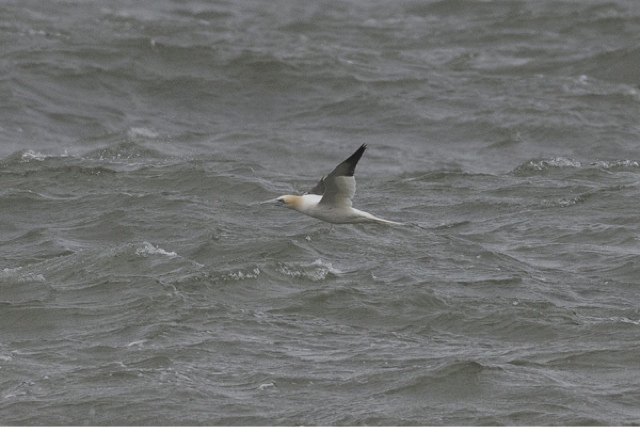 A single Arctic Skua was seen distantly out towards the wind farms but terns were generally scarce. 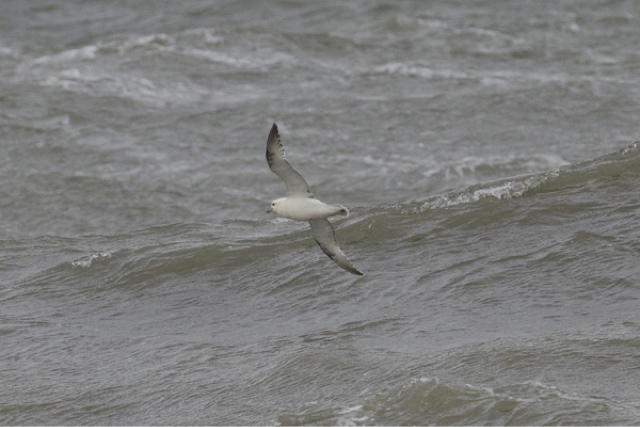 A few lingering Common Scoters and Great Crested Grebes were logged as were 7 Kittiwakes - all adults apart from one second summer bird. 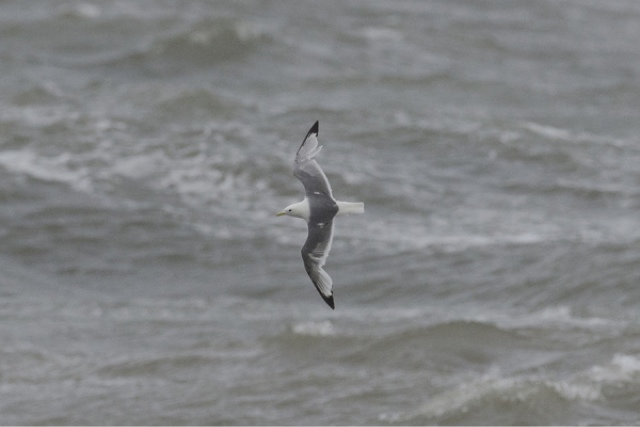 Although the day belonged to the seabirds a Collared Dove that landed briefly in the Obs garden was a surprise. Unfortunately no Storm Petrels were seen but no one was complaining - the sheer numbers of Manx Shearwaters made the whole sea watch worthwhile. 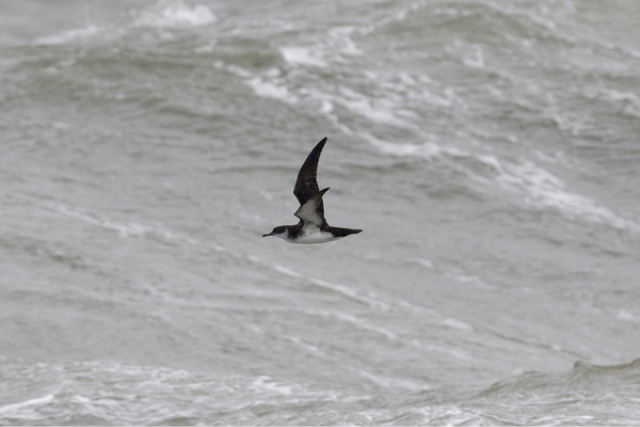 In total we logged in excess of 5,000. It was difficult to comprehend and count the numbers as you were aware of birds passing more distantly through your field of view whilst counting the nearer ones!
After the tide three Bonxies passed over one observer on the shore before they headed over Little Eye.
(DB, PSW + MP) Photos PSW
Posted by Hilbre Steve at 22:08 No comments: 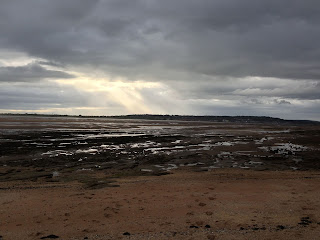 A brief early morning visit with threatening looking clouds (right) and a strong south westerly discovered a Wheatear on Middle island. A single Wheatear is often found on the islands in mid-summer and it is difficult to explain why it is here, it could be a very late spring migrant or a bird that failed to breed. One or two Swallows were moving through but little else. Two Little Egrets were on the shore.
(AEH).            Photo  AEH 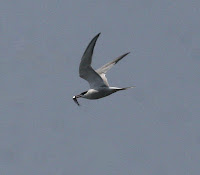 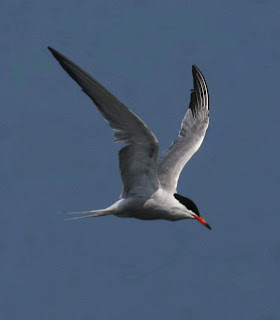 As expected at this time birds were few on the island and even the insects were hard to find today, with just 3 Green-veined White butterflies and a Cinnebar moth on show. Some of the best bird watching was in the sea with flocks of 52 and 40 Common Scoters, 40 Gannets, 33 Common Terns (above right) and 31 Sandwich Terns feeding off the north end during the tide. A large proportion of the Common Terns were carrying Sandeels south down the Dee ( above left, see yesterday's blog re. the Shotton ternery). Eleven Swifts were logged, including 5 together. Waders are now at a premium, all that could be found were 26 Knot, 25 Dunlin, 2 Ringed Plovers, 2 Turnstones and about 250 Oystercatchers. Seven  Little Egrets were off the east side on the tide ebb.
Ringed 1 Meadow Pipit.         ( 495 - 29)
(CJ,KMc+SD,TO) plus Woolston regulars (Dave Bowman, Michael Miles, Dave Steele, Alan Warford).       Photos  CJ
Posted by Colin at 21:46 No comments:

Another quiet day on the island, despite the continuing south easterly airflow, but a solitary late Chiffchaff spent some time around the trapping area. 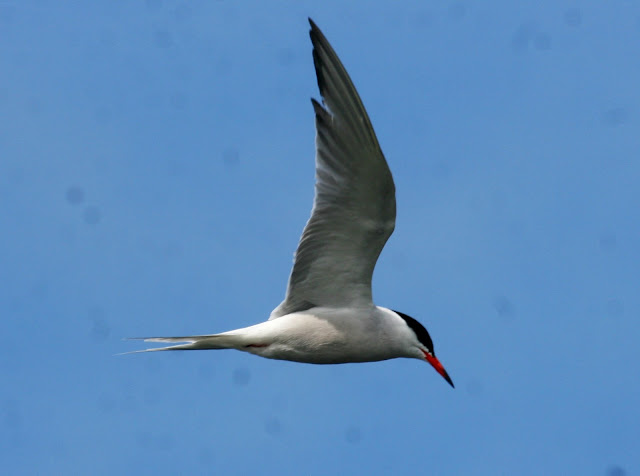 Some good local news: we've had good numbers of Common Terns off the island recently, particularly off the West Hoyle sandback and in the mouth of the Dee, and news from the Merseyside Ringing Group is that over 400 have been seen back at Shotton this summer.  However, it is still early days yet.
(ESCA&DB)
Posted by Hilbre Steve at 21:27 No comments:

Another glorious summer's day - although with early morning news of a female Subalpine Warbler being found on the Great Orme (which you could see from Hilbre - the Orme not the warbler!) Obs regulars are not quite ready to call last orders on spring just yet...
A morning passage of Swifts provided hope that birds were still on the move but there no grounded migrants again and the focus once again turned to the sea, the breeding birds and other aspects of natural history.
The sea produced 4 Great Crested Grebes, 2 Gannets, a few Common and Sandwich Terns and a couple of distant auks. Meanwhile a Small Magpie (Anania hortulata) moth was found in the entrance to the Obs and a few white butterflies were noted included a Green-veined. 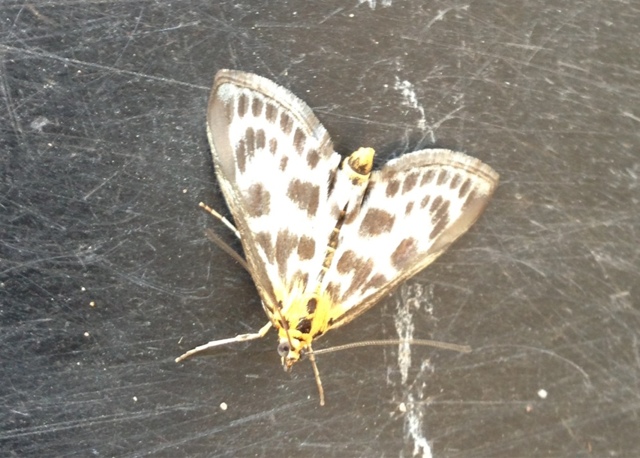 Breeding birds included the first fledged Linnets of the year as well as the first juvenile Meadow Pipit (seen yesterday). The female Mallard was noted (along with three drakes, and the pair of Blackbirds were active early morning only (before the sun started to bake the island and its residents). Dunnocks fluttered about the lower trapping areas and the Swallows continue to carry nest material, but most intriguingly was an adult Pied Wagtail feeding a recently fledged juvenile in the Obs garden and later on the Landrover shed.  There is also the possibility (only a possibility) of a new breeding species for Hilbre - but news on that later in the season...
(JE, NDW, PSW & SRW)
Posted by Hilbre Steve at 11:45 No comments:

Observers were greeted with stunning views of the island and estuary the morning but again the focus was not on grounded migrants. 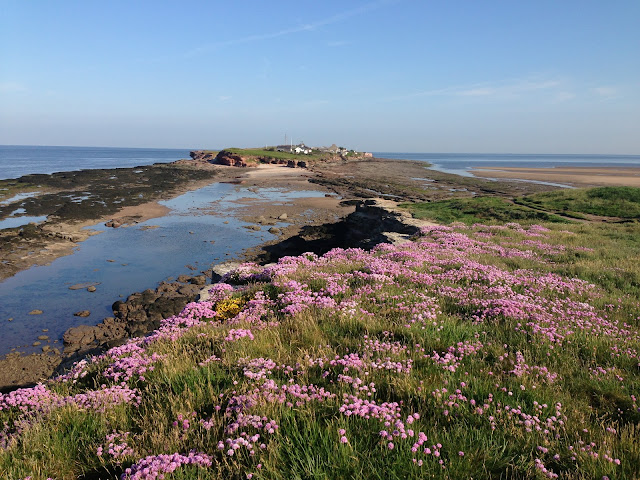 The focus was once again on insects and the first Small Copper butterfly of the year was found in the Wildlife Garden (see below). 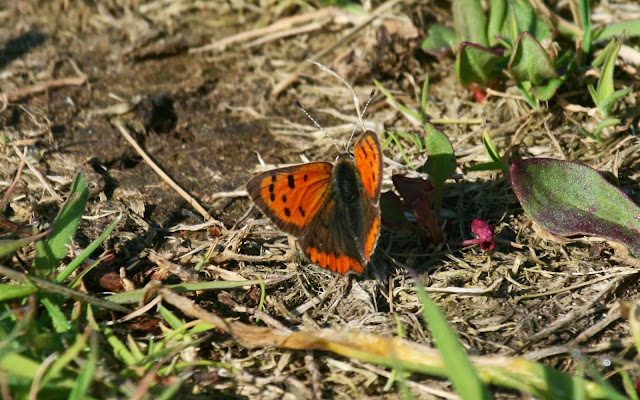 Several Swifts passed over island today and more could be heard screeching high above but could not be seen as they were too high. 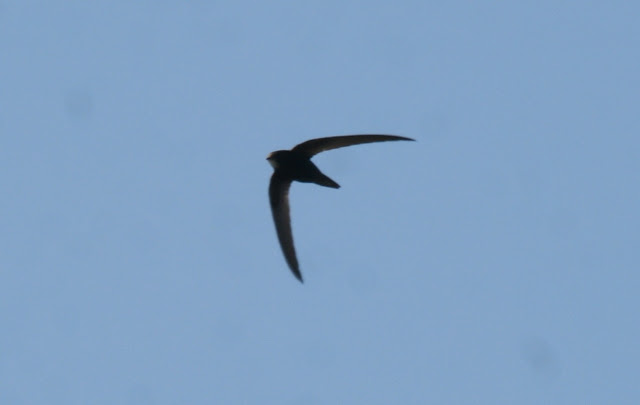 Posted by Hilbre Steve at 20:17 No comments:

Another promising morning weather-wise did not produce much on the grounded migrant front other than a single Chiffchaff found late morning.  Swifts (17), Swallows (9) and House Martins (3) were noted along with Little Egret and some evidence of passage waders (2 Whimbrel, Curlew, 9 Knot, 30 Sanderling and 50 Dunlin).

The highlight ornithologically speaking was a single Brent Goose seen distantly on the tide edge South West of Middle Eye.

Insects were again much in evidence with a single Wasp Beetle found in the Wildlife Garden being the highlight.

The day ended with another beautiful sunset. 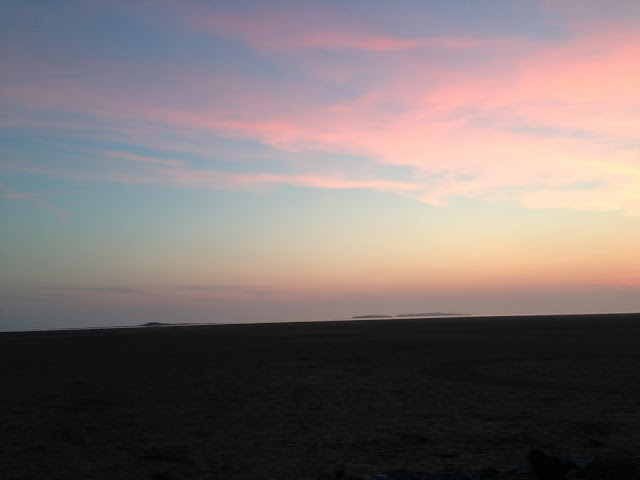 Posted by Hilbre Steve at 12:26 No comments:

Not a single grounded migrant this morning but a beautiful day on the island was also enjoyed by the Rabbit which fed happily on the path over the quiet morning tide.

Five Whimbrel was noteworthy along with 4 Curlew and the most interesting sighting was a small passage of 28 Shelduck in two groups incoming from the North East and heading South West down the estuary.

Posted by Hilbre Steve at 22:00 No comments:

Hopeful early morning rounds of the trapping areas proved over optimistic but the first phylloscopus warblers arrived on the island for almost a week (see 28th May) with two Chiffchaffs caught and a single Willow Warbler seen (where do these late Chiffchaffs come from/go to?  We get them almost every year at Hilbre at the end of May/beginning of June).

Several small and one large party of geese were seen around the islands including Canadas and Greylags but more in keeping with the sunshine and blue skies were five Little Egrets.

Small numbers of waders were noted around the islands including 3 Grey Plover, 21 Sanderling, 250 Dunlin still and two Turnstone in spanking summer dress. 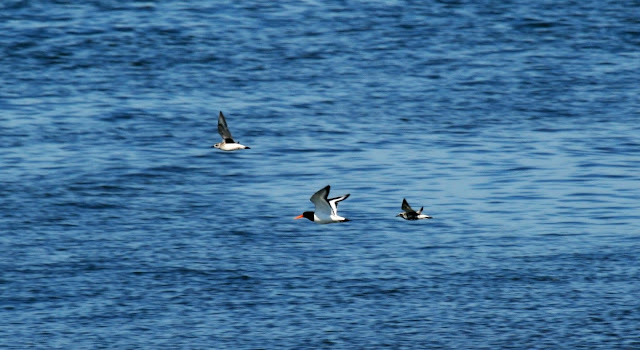 Two Ravens were noted from the mainland at Red Rocks sitting on a carcass of a Harbour Porpoise on the beach, but observers in the Obs were distracted by the arrival of a stunning summer plumaged Black Guillemot flying down the east side of the island, ditching in the flooding tide south east of the Obs before taking flight and relocating to just off the North End. 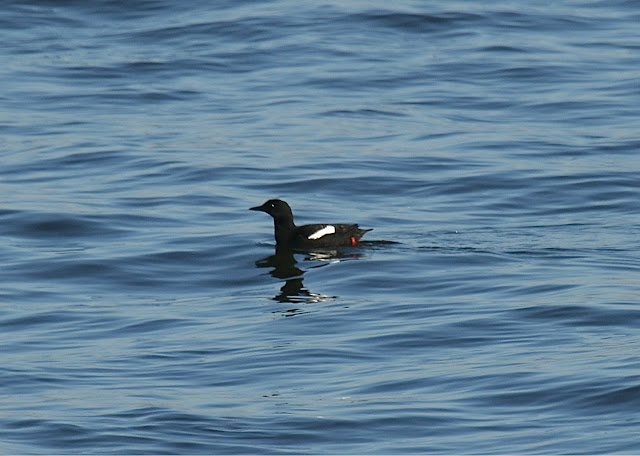 It stayed for a short while before flying off, before being seen again mid morning after which it disappeared as the tide ebbed, much to the irritation of two mainlanders who had come to twitch this 'Wirral Mega'. 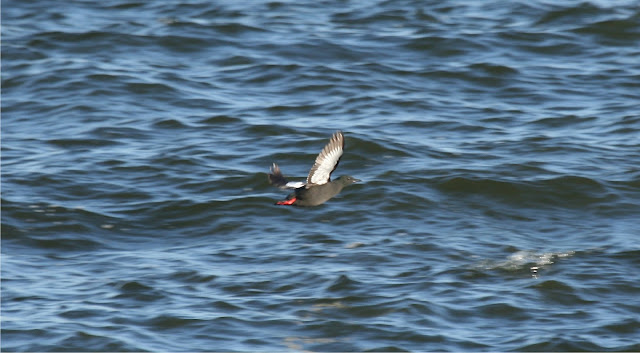 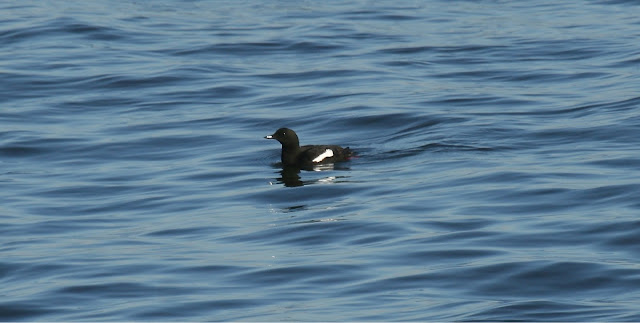 With the day warming up attention soon turned to invertebrates with a smart male Orange Tip butterfly seen on one of its larva plants (Cuckoo flower), a single Cinnabar moth and male Large Red and Blue-tailed Damselflies around the new pond and south end areas of the island. 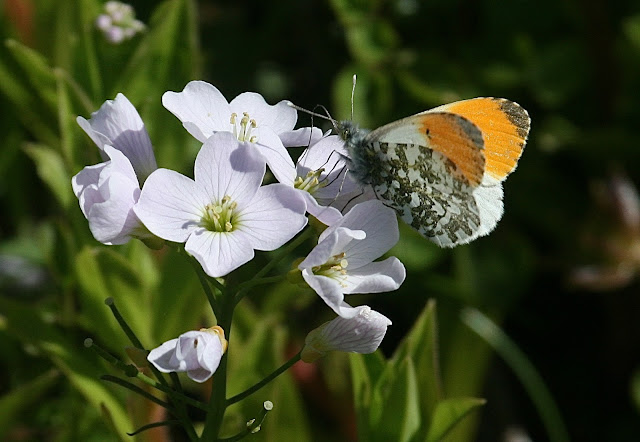 Thirteen Little Egrets was another good count for the islands but it was generally another quiet day on the islands.  Large Red-tailed Danselfly was noted again as was a Cinnabar Moth and there were a few waders about including 200 Oystercatcher, 250 Ringed Plover and 30 Sanderling.  A Peregrine graced the skies above the islands today the first for a while.

Posted by Hilbre Steve at 13:05 No comments:

Birding highlights this morning include 8 Little Egrets and 2 Greylag Geese and single Willow Warbler and Chiffchaff.

The Rabbit however was fit and well and showed briefly and Blue-tailed and Large Red Damselflies were again noted.

Posted by Hilbre Steve at 13:00 No comments:

Freshening and cool North Westerly did not raise the hopes of observers who'd stayed on overnight and they weren't wrong!  Highlights of the morning included the colour-ringed Herring Gull, 4 Little Egrets and 18 Garden Tiger Caterpillars in the Obs garden.

Posted by Hilbre Steve at 07:44 No comments: