Weather: W force 6
A thousand Cormorants flew out of the estuary at dawn, a regular feature now to look out for at most times of year. A pair of Teal were recorded, also single Common Scoter and Red-breasted Merganser. Two Grey Plover and a Purple Sandpiper were the best of the waders.
(AEH et al)
Posted by Colin at 16:32 No comments:

Weather: SE force 4
Six Wigeon were the only duck logged today, while some wader counts were 80 Curlew, 15 Grey Plover, 105 Turnstones and 30 Redshanks. Both Rock Pipit and Song Thrush were noted.
(AAB,GB+3)

Weather: SSE force 7, then S force 4/5 at midday, and SW in the afternoon
A Weasel was seen on the log pile in the obs garden today, an unusual creature on Hilbre, but following a sighting several weeks ago. 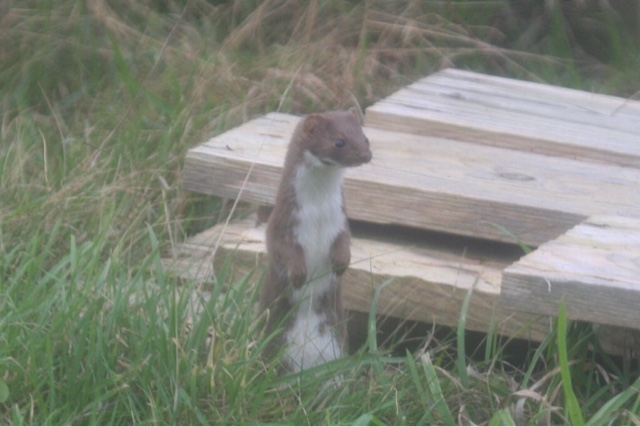 Weather: SW force 1/2
A high tide visit was quite productive with a Short-eared owl on Middle Eye, and a drake Long-tailed duck that flew west towards the point of Ayr. Six Wigeon and 20 Teal were other ducks present, while a boat disturbed a huge flock of about 4,000 Common Scoter that were stationed close to the wind farms. Three Red-throated Divers and 10 Great Crested Grebes were logged, also a Shag, a Peregrine, 63 Ringed Plovers, and 4 Purple Sandpipers in the high tide roost. As the tide ebbed the Brent Geese dropped in between Hilbre and Middle Eye and a count of 101 Pale-bellied and a single Dark-bellied bird was made. Two of the regular colour ringed birds were located in the flock. On the passerine front a Song Thrush was present in the SK Paddock and the resident Dunnocks, Robins, Wrens and Blackbirds were all recorded. An unusual sighting was of 6 Grey Seals hauled out on buoys HE2 and HE3.
(PSW,+ Mark Payne)

Weather: SW force 5/6 later 7/8, rain showers
Best of the sea birds on a blustery day was a pair of Red-breasted Mergansers, 3 Common Scoters and 2 Great Crested Grebes. Two Purple Sandpipers, 50 Redshank, a Grey Plover and a Sanderling were around the island. Out of the eighty Brent seen, 2 were colour ringed, while also on the shore was a Little Egret.A male Peregrine was the only raptor.
(AEH)

Weather: SW force 5/6 rain showers.
One hundred and fifity Ringed Plover were between Little Eye and Middle Eye, other waders noted today included 3,000 Oystercatcher, 40 Turnstone and 3 Knot. A Red-throated Diver and a juvenile Shag were the highlights from the sea, while a single Starling visited the island.
(PSW)
Posted by Colin at 14:06 No comments:

Weather: SW force 4, rain
A wet morning was not the best day for finding birds, even the sea was quiet with just 6 Great Crested Grebes and 50 Common Scoters found apart from the many Cormorants diving off the north end. A single Pied Wagtail arrived in off the sea (below) and a Rock Pipit was also at the north end of the island. 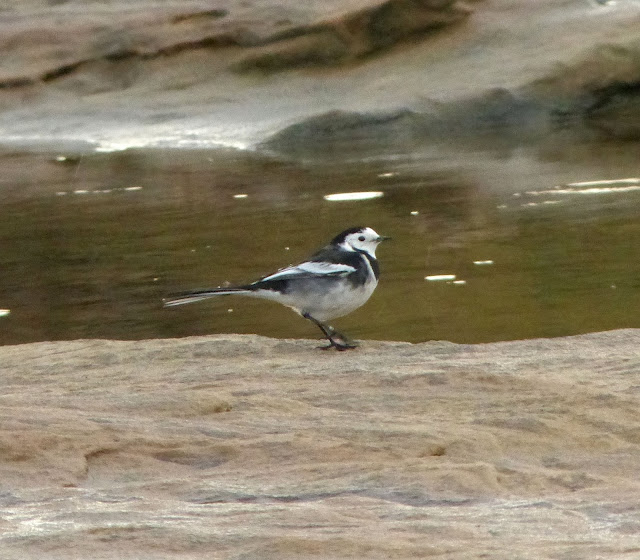 The Linnets continue to flock this late in the year, today 42 were present, while decent wader counts included 67 Bar-tailed Godwits, 25 Grey Plovers and 200 Sanderling. The blue and red ringed Brent and a single dark-bellied bird are still here among the hundred or so gathered together this morning.
(AEH,CJ et al)      photo CJ

Weather: SE force 1/2
A search of the Little Eye area failed to find any sign of the Lapland Bunting, the big surprise from yesterday's visit. A drake Long-tailed Duck rapidly flew north east passed the north end of the island, and this became very much the highlight of this morning. Perhaps the same bird from yesterday?
At least four Rock Pipits were on the island, also male and female Blackbird, a Song Thrush and 2 Starlings flying down the east side. 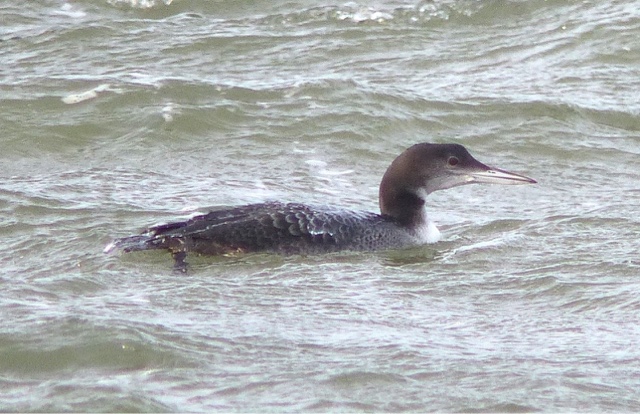 The Great Northern Diver (above, first found on 10th), still inhabits the north end of West Kirby Marine Lake where a juvenile Shag was found later (see below). 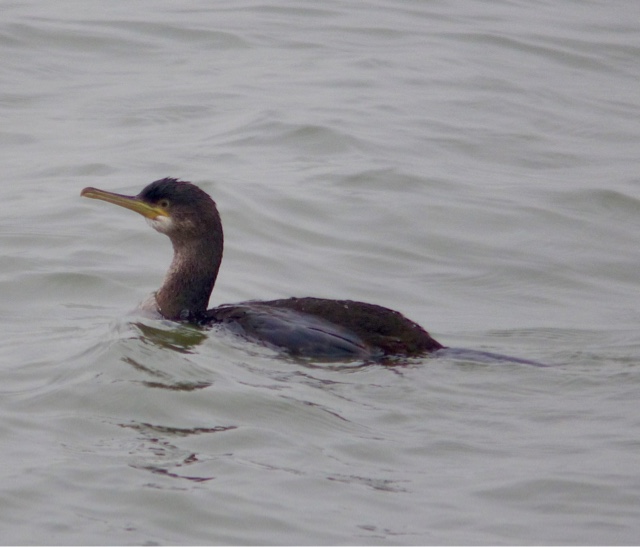 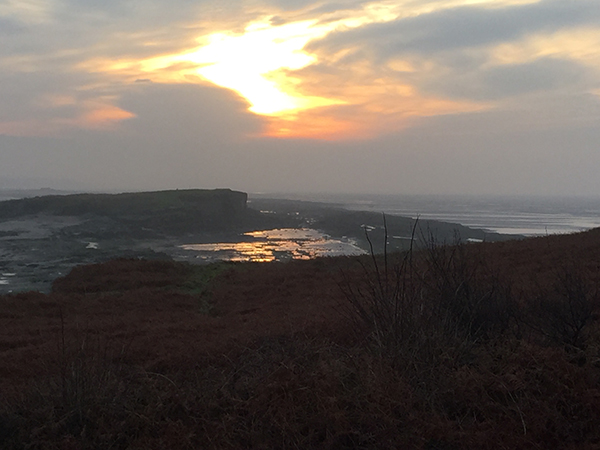 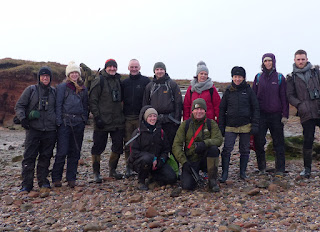 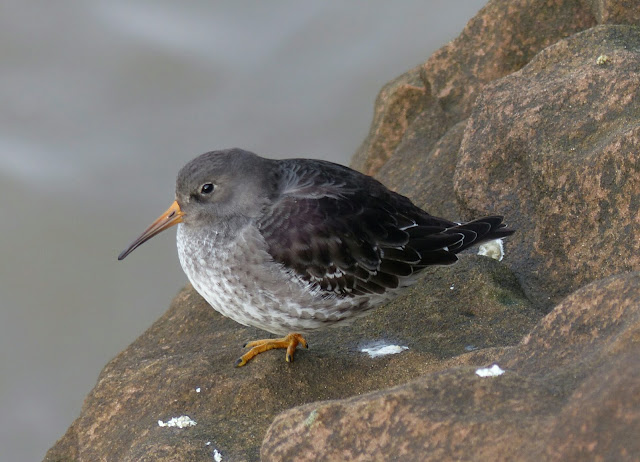 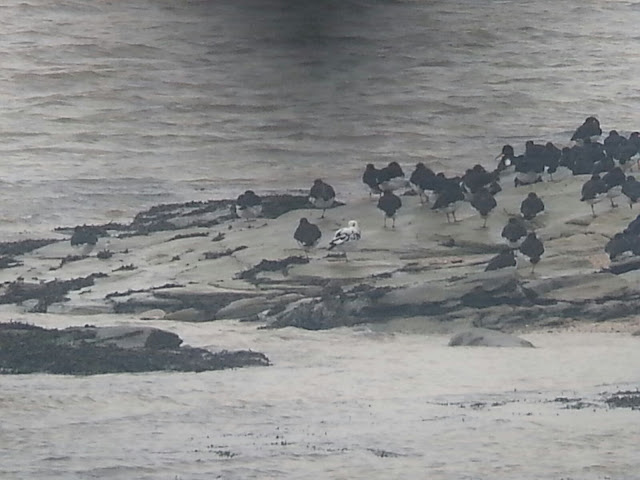 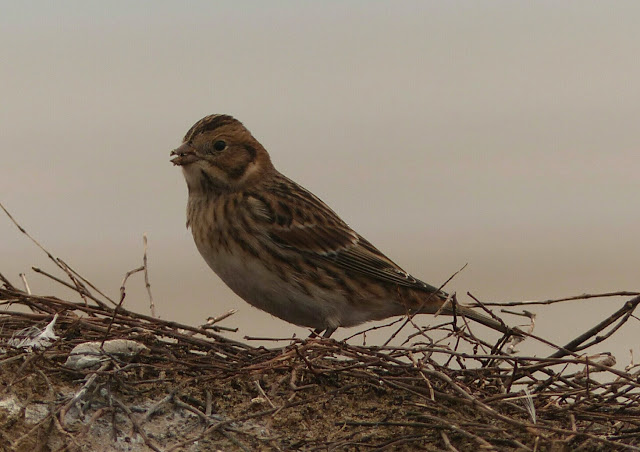 Weather: SSE force 1
Good records today of 2 Ravens, 25 Pink-footed Geese flying south, a female or immature Eider and 4 Wigeon. Cormorants also featured with a total of 2,130 flying out of the estuary at dawn. Six Meadow Pipits were at Middle Eye with 11 Linnets and 5 Starlings passed through the islands. Extensive wader counts mostly from the east hoyle on the flood tide included 520 Grey Plover, 2,500 Knot, 1,000 Dunlin and 220 Sanderling.
(DB)
Posted by Colin at 17:04 No comments:

Weather: WSW force 3, heavy squalls, later SW force 5
The unseasonably mild weather encouraged the Lesser Celandine to be well advanced in preparation for the spring. Bird sightings were few today, over 200 Brent were about the islands, also 3 Little Egrets and both male and female Peregrine. Waders included 30 Ringed Plover, 25 Redshanks, a Grey Plover and a Knot.
(DB)
Posted by Colin at 16:54 No comments:

A severe gale made bird watching almost impossible, recorded were 3 Common Scoter in the gutter and a Purple Sandpiper at the north end.
(AEH,PSW)
Posted by Colin at 15:41 No comments: 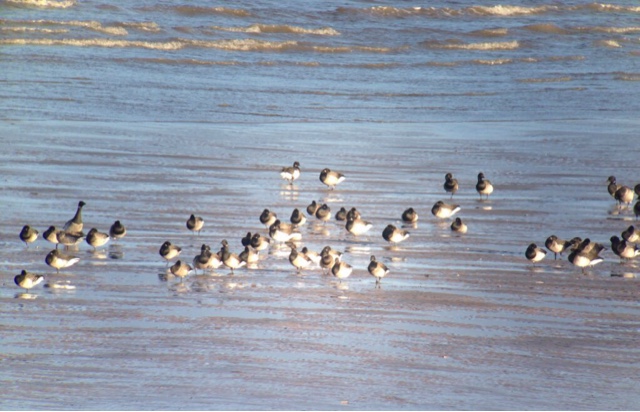 Not a bad morning for a westerly in December. Best record was a Yellowhammer flying overhead to the south, a very rare bird for Hilbre, indeed the first of its type to be recorded at Hilbre since April 2003 (see below that bird having been caught and ringed).
The only other small visitors were 2 single Starlings followed a short while later by a flock of 15.
The Brent flock were more accessible to be counted than of late and reached a new peak for this winter of 235 including a single dark bellied form.  In the flock were no less than four colour-ringed individuals including returning birds that were ringed in Canada, Ireland and Denmark and a new bird which was ringed in Iceland this spring (May 2015).  The latter having been seen in Northern Ireland earlier this autumn (thanks as always to the Irish Brent Goose Research Group for the information). 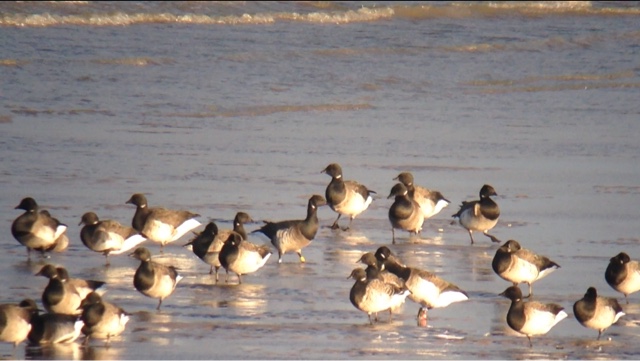 A group of 25 Pintail were found floating on the sea off the north end and later flying to the west, while the Eider of the last few days is still present, otherwise sea watching produced little, 4 Great Crested Grebes and 70 Common Scoter. Just before noon a flock of 24 Greylag Geese flew south down the east side of the island. 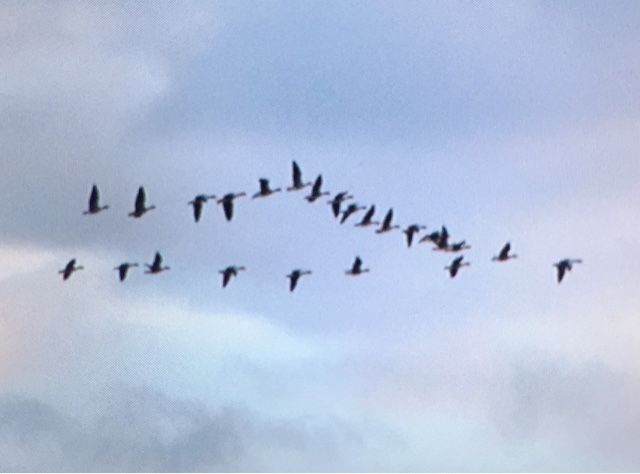 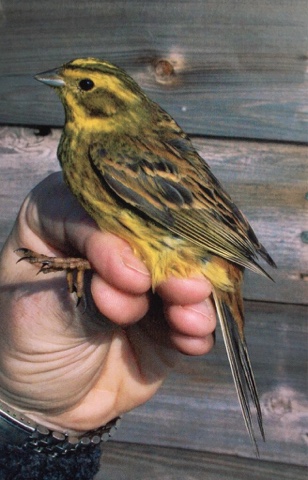 Weather: SSE force 2/3
On a quick visit the Brent were counted at 197 including at least 2 dark-bellied and 2 colour ringed birds. Twenty Starlings flew south west and the female/immature Eider was still present.
(DB) 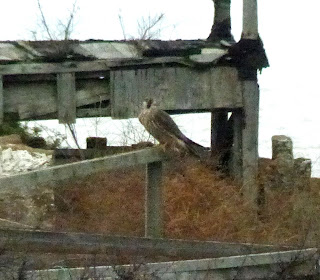 With no visits to the obs for some days, a quick trip over this morning to check for storm damage following the recent gales thankfully found only small problems with the buildings and heligoland traps. Best bird encountered was a female or immature Eider on the sea off the north end. 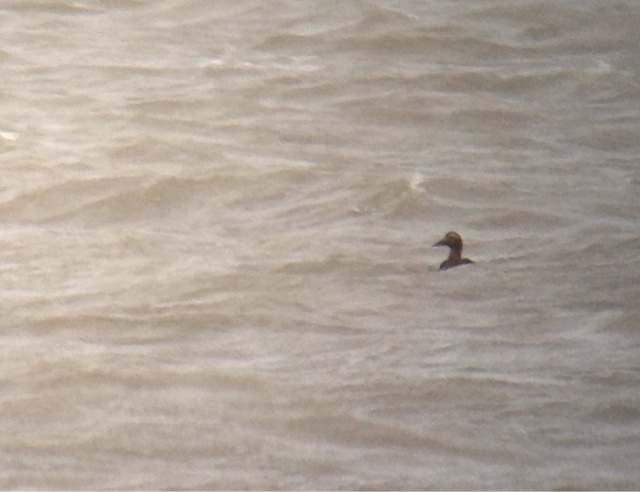 A couple of visiting Starlings flew about and the Linnet flock seems to have reassembled to about 45 birds, while Brent are at about 140 strong and 2 Purple Sandpipers were seen. A Peregrine hunted the east side and then landed on the SK heligoland trap (above), the first time some of us could ever remenber this happening. 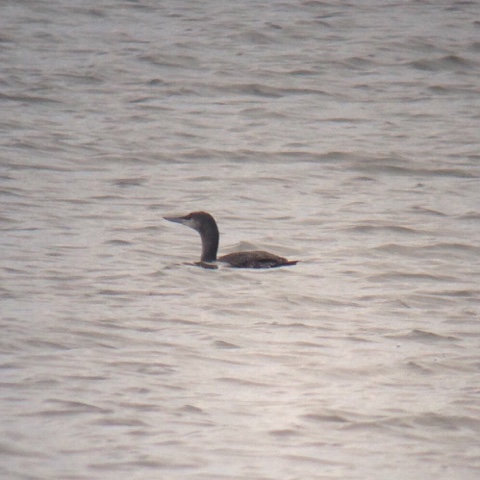