Weather: NNW 5-6, good vis, 1/8 cloud
A brief visit produced the usual suspects with 250+ Brent Geese all hunkered down sensibly sheltering from the bitingly cold blustery northerly wind as well as 10 Eiders split into smaller groups around the East side and off the North End.
Waders were again evident around the ebbing gutter but counting was difficult today. 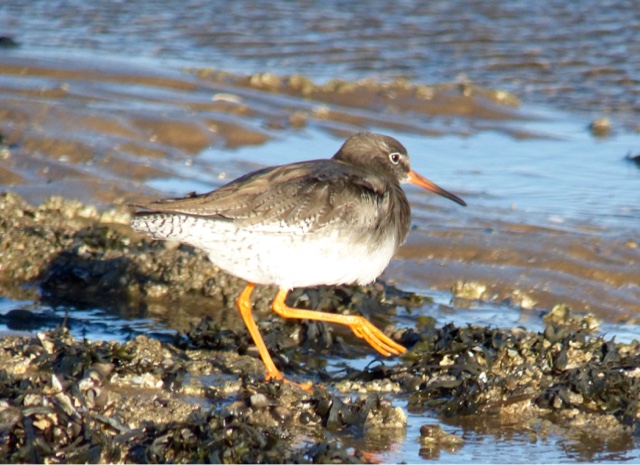 A single Little Egret was also sheltering behind the reefs before temporarily sitting out by the gutter. At least three Song Thrushes and a single Blackbird were noted on the island but there had been no obvious cold weather arrival yet.
Posted by Hilbre Steve at 20:19 No comments:

Weather: NNW force 3/4,  35 mls vis, wind chill
A very cold feeling morning but with a bright and cheerful look to the islands. Eleven Eiders were still off the east side as the tide receded although there was little else to excite on a brief sea watch, just a distant 300 Common Scoters. Shorebirds about the island today included 80 Common Gulls, 3 Little Egrets, 25 Shelduck, 18 Ringed Plover, the odd Dunlin and Curlew also a Bar-tailed Godwit. 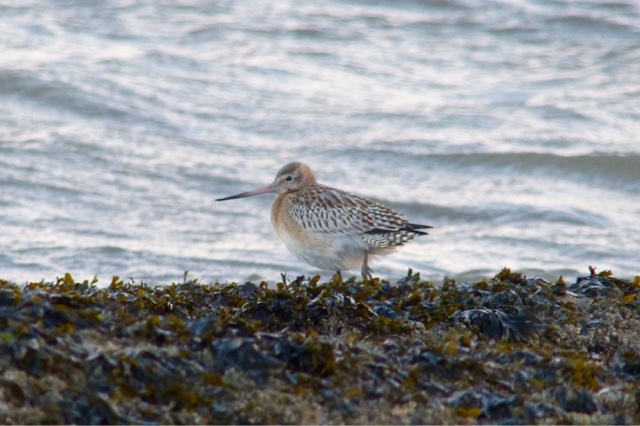 The Brent co-operated by massing on the west side after the tide and enabling a good count of 309 plus a dark-bellied bird. A Peregrine was near Little Eye early on this morning. Flocks of Knot totalling about 4,000 passed over the sea north of the island apparently heading from North Wales to the Lancashire shore.
In the paddocks 4 Song Thrushes and a Blackbird escaped the ringers.

Weather: NW force 4/5 gusty with hail showers, wind chill
A short visit in uncomfortable weather found 11 Eiders still at the north end of the island, but only 3 Purple Sandpipers were evident at the low tide. A group of 38 Bar-tailed Godwits fed off the east side with 40 Redshanks and a Grey Plover. A Common Snipe flew up from the east gutter and went off towards the West Kirby shore.
The choppy sea was hard to scan in the wind, but a Red-breasted Merganser flew west as did an adult and juvenile Kittiwake. Forty Common Scoter were seen at distance.
Several small groups of Starlings went through in addition to a flock of about 250 seen off the east side. In the paddocks were 2 Blackbirds and 2 Song Thrushes and a few Wrens and Robins.
Later in the morning a juvenile Peregrine sat by Little Eye and seemed unconcerned by any nearby activity. 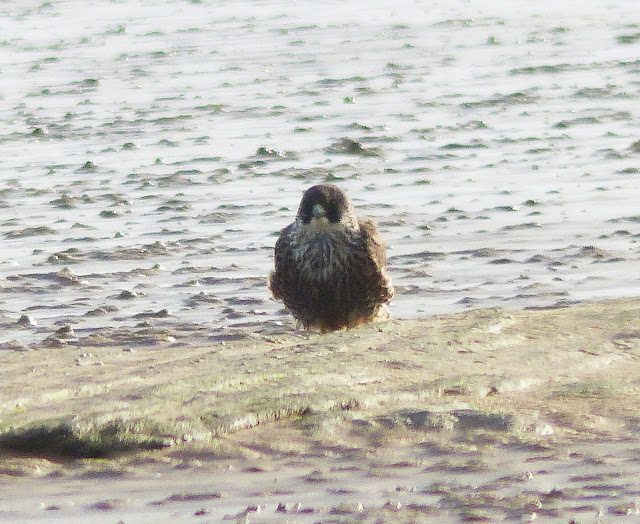 Weather: WSW force 6/7
An uncomfortable windy day on the island found 12 Eiders still hanging about, it is some years since so many have spent so long here, hopefully they may now winter. Waders counted on the high tide included 3,900 Oystercatchers, 60 Grey Plover, 250 Knot, 60 Redshank, 80 Turnstone, a Bar-tailed Godwit and a single Purple Sandpiper. Numbers of Purple Sandpipers have been so erratic so far this early winter it is possible they are moving around the coasts of north Wirral. Four Starlings went through and on the island were 3 Song Thrushes, a Blackbird and 3 Wrens, all of which may be wintering, also a visiting Chaffinch.
Ringed: 1 Song Thrush              [ 625-35 ] 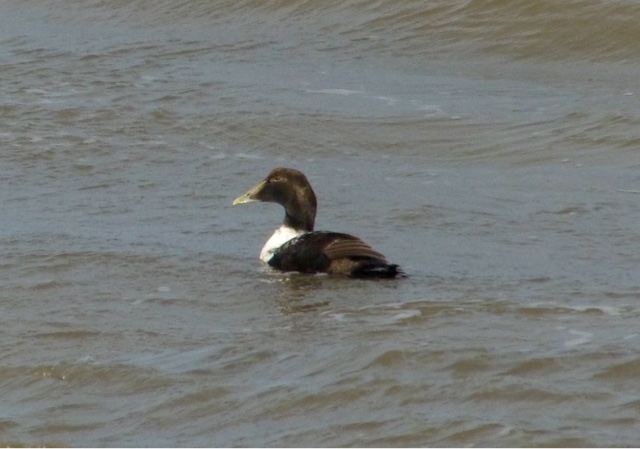 A thoroughly pleasant late autumn/early winter's day saw the now regular flock of Eider in the gutter with eight birds present in addition to three others just off the North End over the tide. 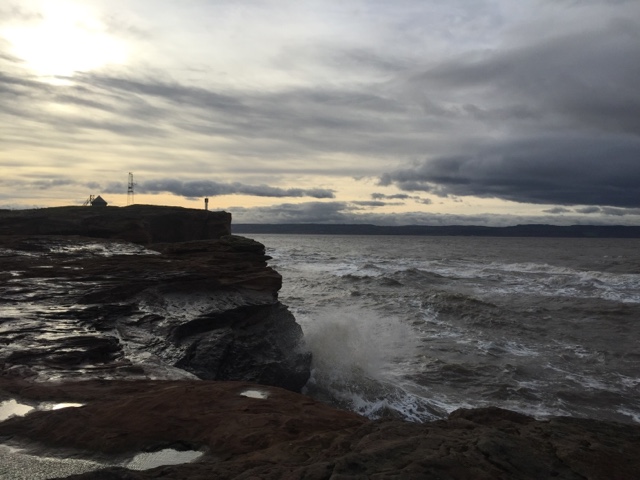 A single Snipe flew over the sole observer as they approached the island as the the tide flooded and, unusually, it landed on the rocks but skulked off and could not be relocated for a photograph.
Nine Purple Sandpipers were roosting at the North End sheltering out of the blustery westerly breeze. 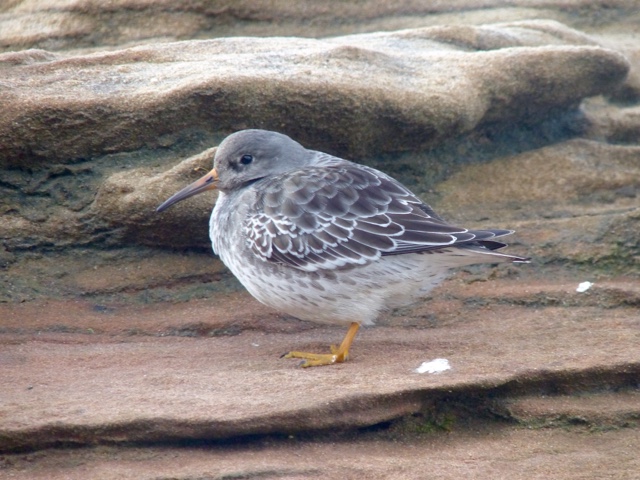 The three Eiders seemed to be enjoying riding the waves and swimming and diving in the frothy sea and likewise several flocks of Common Scoter were noted totally 350 birds. 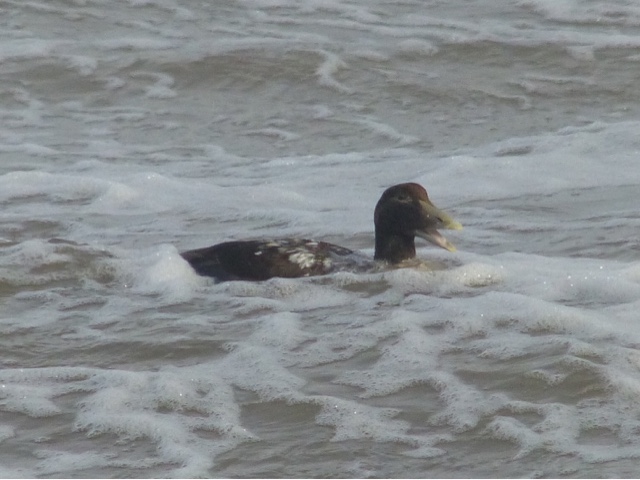 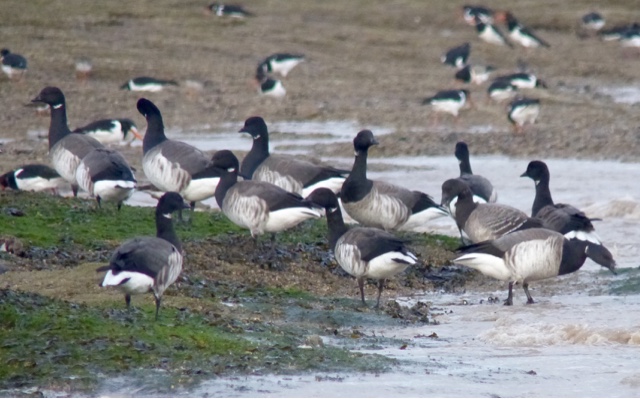 As the tide dropped the Pale-bellied Brents moved up from Little Eye and began to feed between the islands and to the west of the pool with a minimum 280 birds counted including a colour-ringed bird previously ringed on Iceland on passage to/from the Canadian Arctic breeding grounds. 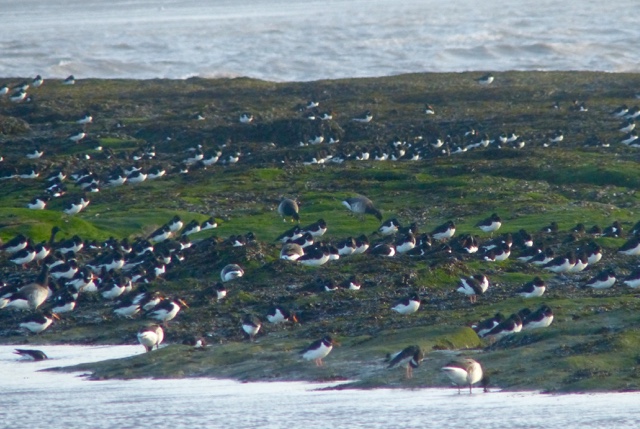 Two Song Thrushes and a single Blackbird were noted on the island but no pipits of any species were seen today. 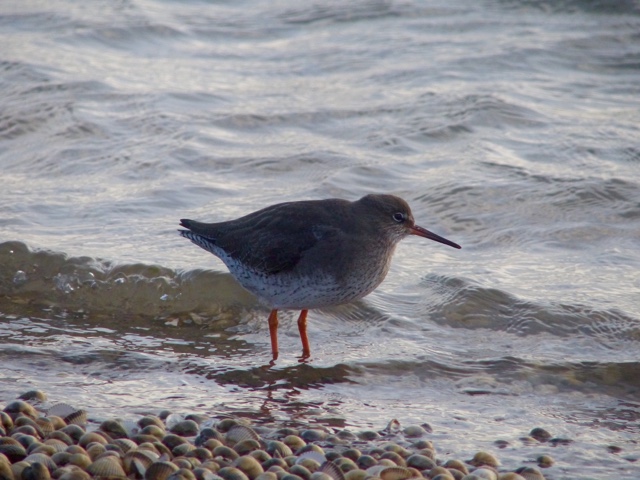 Posted by Hilbre Steve at 16:40 No comments: 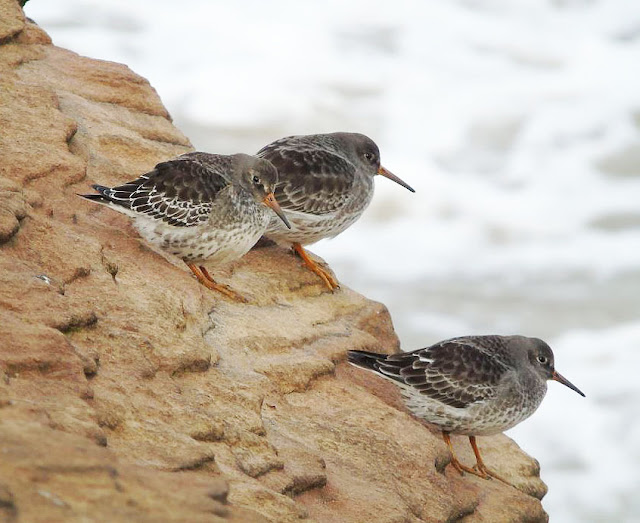 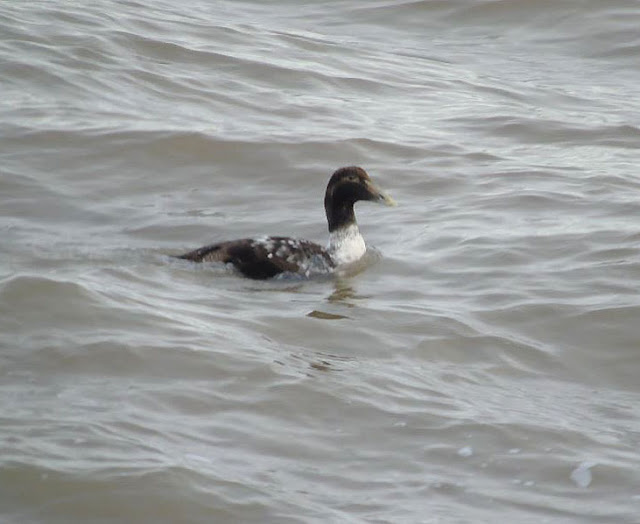 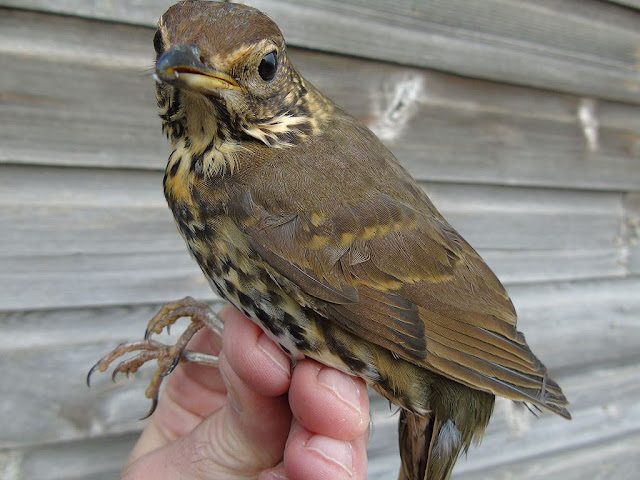 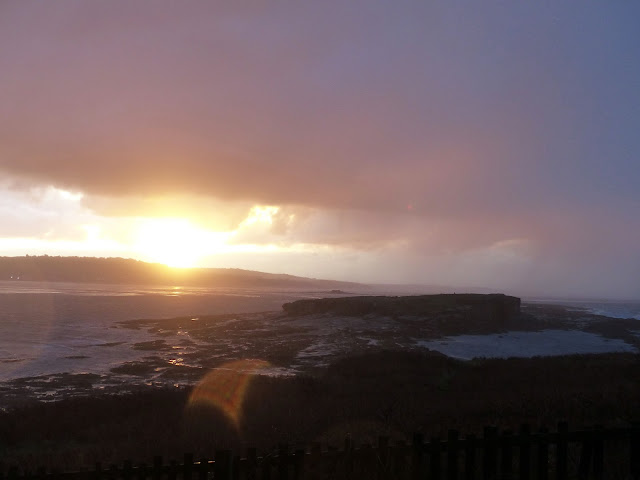 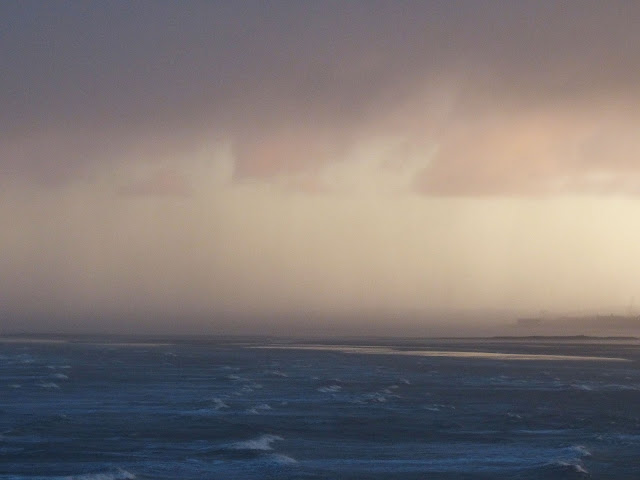 Eleven Eider still loafing between Middle and the North end. 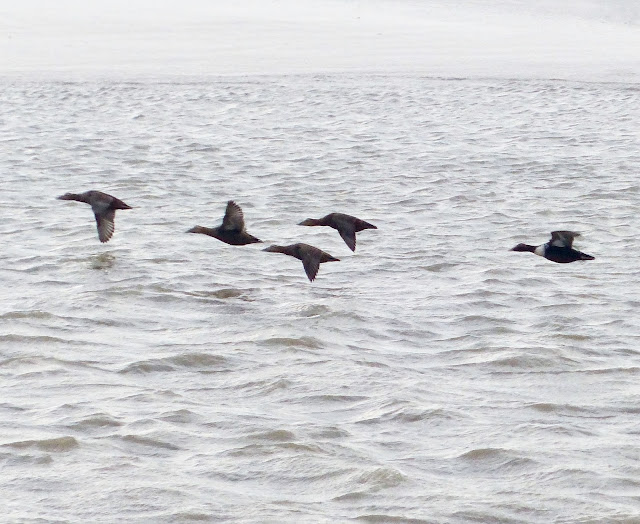 A Single Blackbird and 4 Robin were all keeping low in the inclement weather.
Sixty Starling headed west passed Little Eye with a Peregrine sitting on the rocks there too. 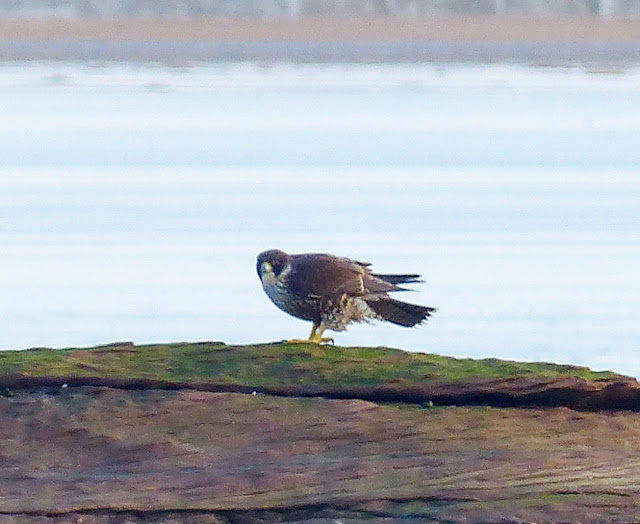 The tide was still covering the top path 2 hours after tide, the wind keeping the tide in.

One hundred and twenty Shelduck were east of the island. 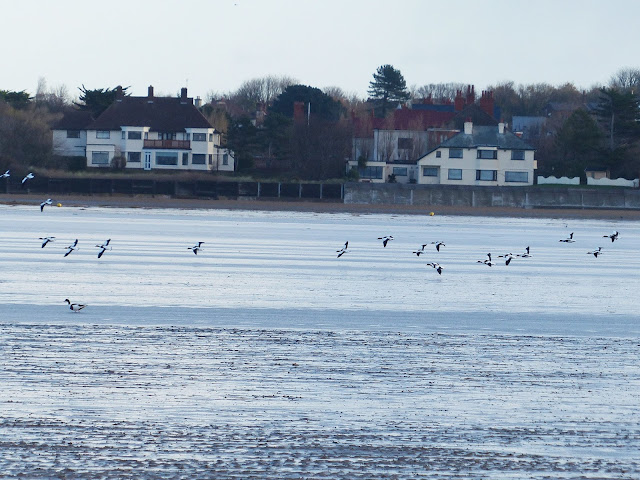 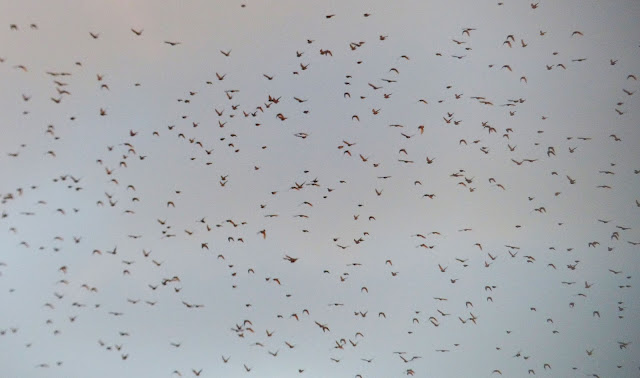 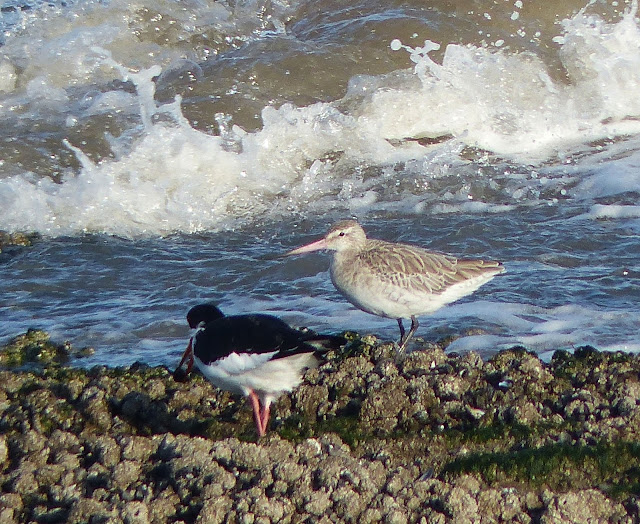 Generally the paddocks were very quiet although a single Blackbird and 2 Song Thrushes were about and passing through 2 Goldfinches a Chaffinch, 2 Pied Wagtails and about a dozen Meadow Pipits.
photos CJ 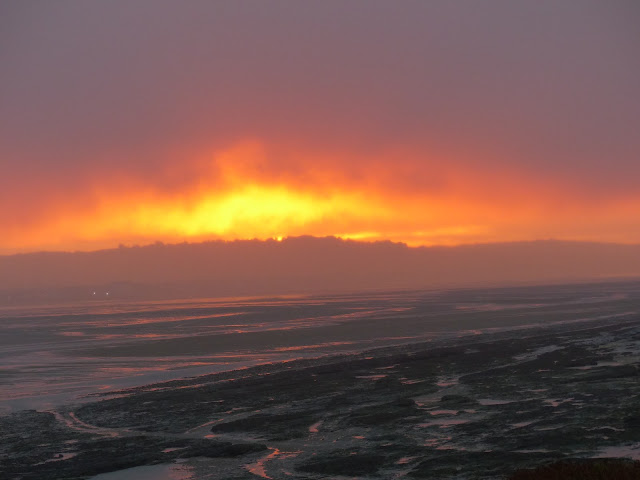 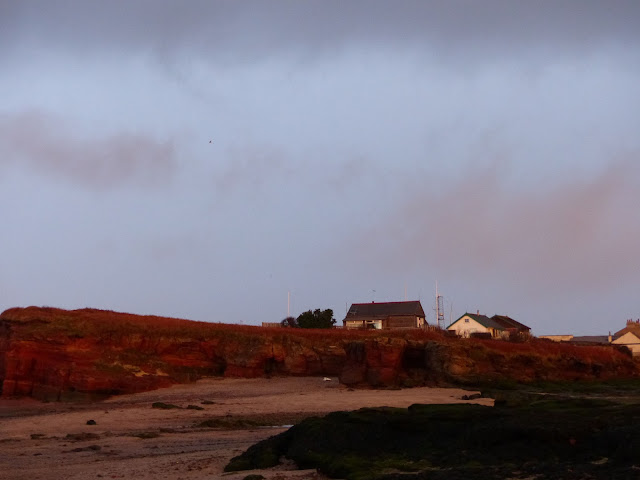 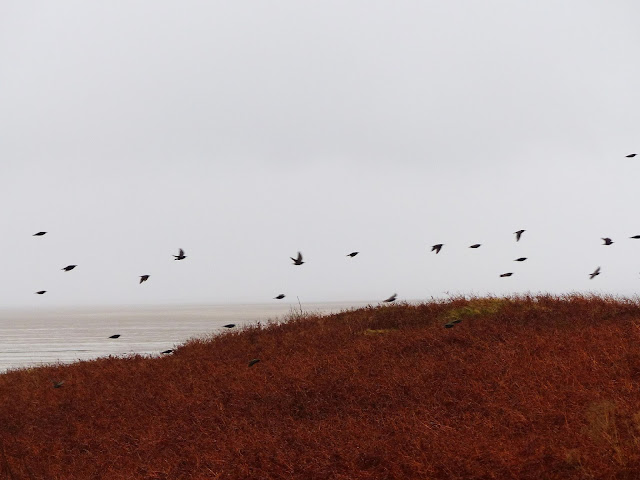 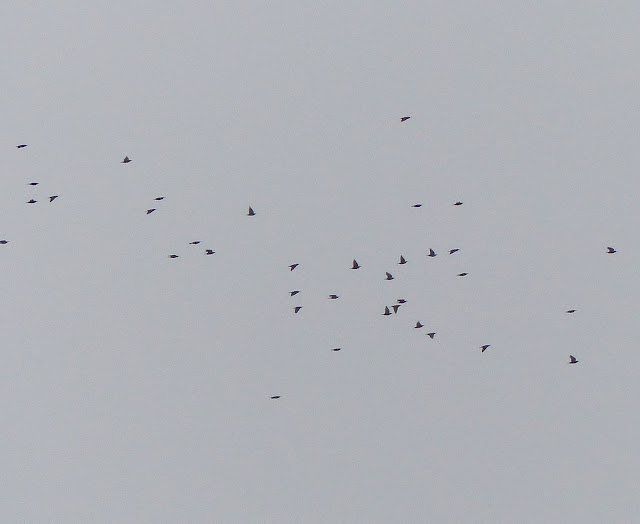 The only other birds noted were 8 Eider and a Purple Sandpiper on the north end and 3 Song Thrush, a Blackbird and Chaffinch in the gardens.
photos AS