Weather: SSE force 2, slight mist
One hundred and sixty two Brent were counted today with 45 Curlew, 2 Shelduck and a Little Egret also on the shore. Two Pied Wagtails and 4 Meadow Pipits were present.
(AS)

Weather: ENE force 2
The only definite passage birds today were 4 Skylarks, while 4 Wrens were noted on the island with another 2 on Middle, also 2 Song Thrushes, 4 Dunnocks, 2 Meadow Pipits and 3 Robins. The best of the waders seen were 500 Knot.
(AS)
Posted by Colin at 14:48 No comments:

Weather: ENE force 2/3  slight mist, cold
Definite signs of spring this morning with records of a Grey and a Pied Wagtail, a House Sparrow calling around the south end, and 4 Ravens flying high beyond Middle Eye.

To remind us that it is still winter excellent views were obtained of a male and 2 female Scaup off to the north east of the island.
The calm sea also produced 12 Great Crested Grebes, 100 Common Scoter and 2 drake Red breasted Mergansers, while the usual land birds included 3 Rock Pipits and 2 Song Thrushes.
(AEH,CJ,NDW,SRW) 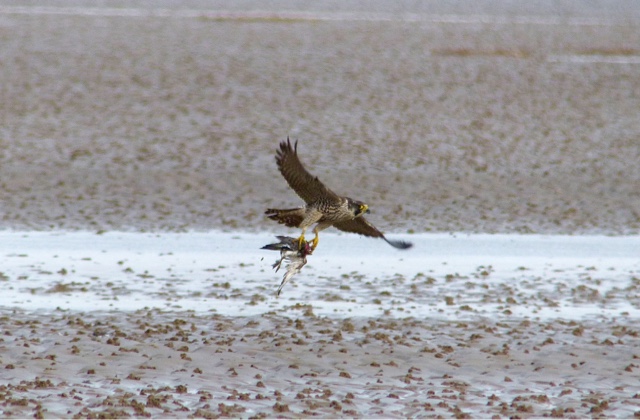 A Grey Wagtail over the island was the first this year, and a Jackdaw was also a sign of the coming spring. Sea birds noted included 250 Common Scoter, 6 Red-breasted Mergansers, a Great Crested Grebe, with a male Goldeneye being the best of all. On the flood tide 5,000 Knot were present and a Peregrine hunted about. Regulars seen included 3 Robins, 3 Dunnocks, 2 Rock Pipits, 2 Song Thrushes and a passing Pied Wagtail. 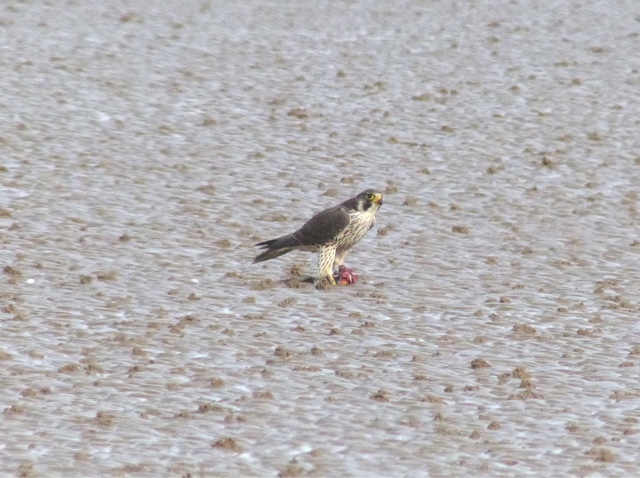 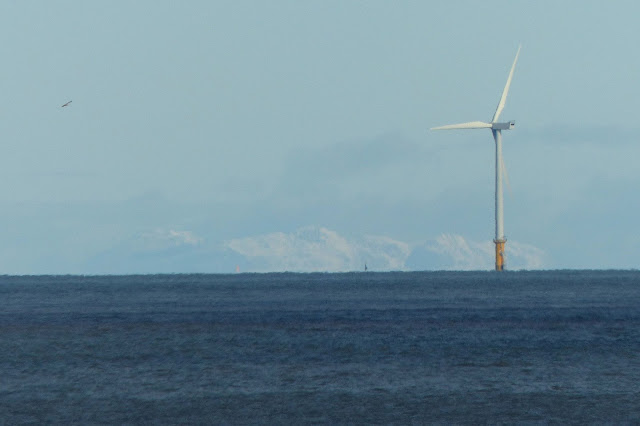 A very short pre-tide visit on a fine morning found the snow clad Lake District fells visible in the sunshine (above,CJ). Good visibility helped to identify 2 Scaup on the sea off to the north of the island. A Grey Wagtail was on the West Kirby beach and a Pied Wagtail on the island, while there were 6 Robins, 1 or 2 of which may be new into the island and 2 Meadow Pipits seemed to be getting excited about spring arriving. a flock of about 300 Knot fed at the north end, a pair of Red-breasted Mergansers were off the west side and 2 male Scoters showed close in with about 200 others out towards the wind farms.  Single Little Egret and Grey Heron were noted (see below, SRW). 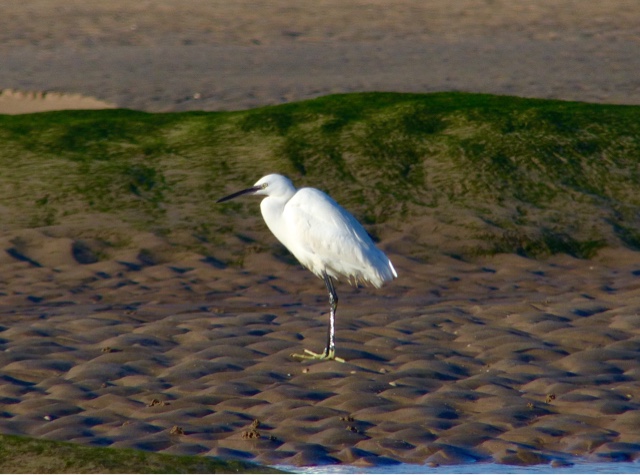 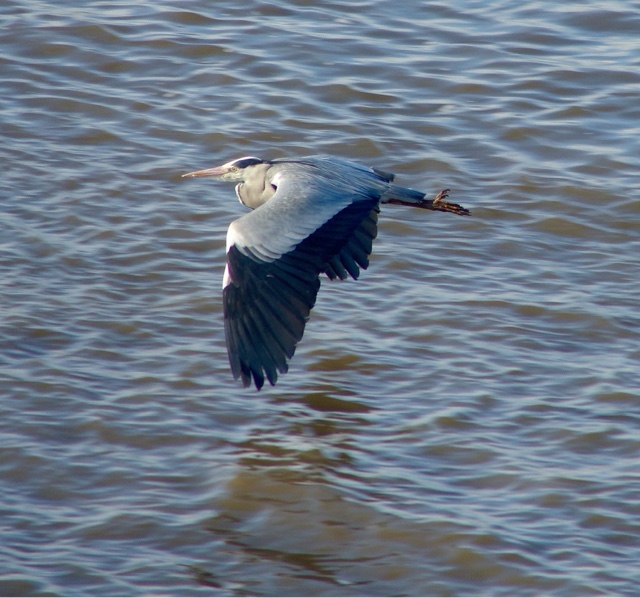 On the flood tide 80 Sanderling were on the west side tide edge by Little Eye.
(AEH,CJ,SRW)
Posted by Colin at 14:56 No comments:

Weather: W force 1
A Skylark was singing on Middle Eye today, a hopeful sign that they may return to breed on the islands, but previous sightings over the last few years have proved in vain. Also logged today were 5 Purple Sandpipers, 4 Robins and 2 Song Thrushes and a Grey Plover.
(AS)

Weather: NNE force 3
It was fine weather today for doing some major work on the 'heli' trap in preparation for the spring, pictures below. A good count was made today of 241 pale-bellied Brent, the other highlight being a pair of Goosanders flying south west. Six Goldfinch and a Pied wagtail appeared, while 2 Song Thrushes and 8 Linnets were also on the island. Just 3 Purple Sandpipers were present, other waders included 135 Turnstone and 75 Redshank. A Small Tortoiseshell butterfly was a surprise addition to the list. 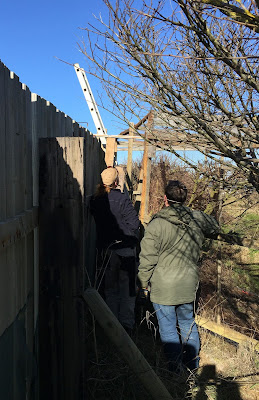 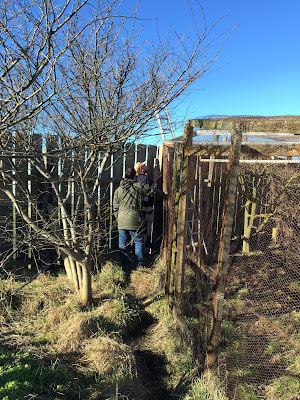 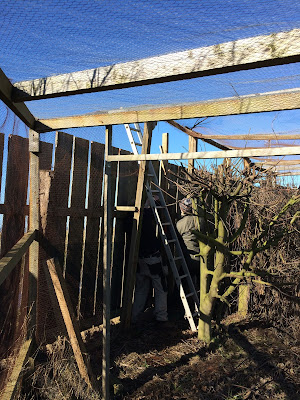 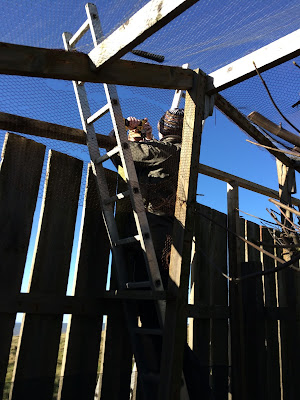 
Weather: W  force 6/7. Cloudy and some rain later.
An early morning tide meant meeting at 06.30 and getting across to Hilbre in the dark on a very windy morning. 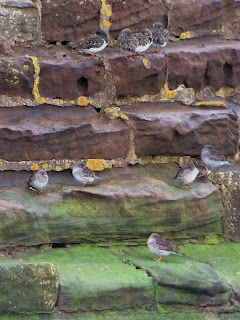 As the tide flooded a count of the Brent Geese sitting on the water just off Middle Eye resulted in 226 birds being logged. With the wind in the west a lot of waders chose to roost in Niffy bay with good numbers of Turnstone and Redshank present. A few more Knot have recently begun to roost around the island and today saw small groups totalling 150 birds being seen at various locations and times. The highlight though was the highest count of Purple Sandpipers seen so far this year with at least 9 birds being seen roosting with Turnstones on the steps in Niffy Bay (left).
Sea watching was difficult and only a single Red-throated Diver was seen flying west along with two Great-crested Grebes on the sea. Fewer Common Scoter were seen with only 40 being recorded.
The gull and wader roost on Middle Eye briefly held an adult Yellow-legged Gull which was present for around 10 minutes but was chased off by other gulls (see photo below in poor light). 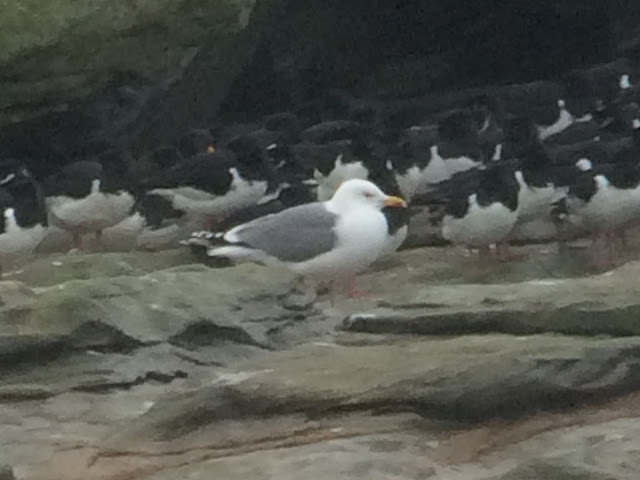 Oystercatcher numbers were down on recent counts and this ties in with news from the northern isles that many have arrived back on their breeding grounds.
As to be expected in such windy conditions passerine numbers were low and apart from the resident birds the only other passerine see was a solitary Starling.
(AEH,KMc,PSW)     photos  AEH 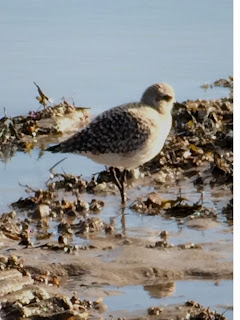 
Distant sightings of Common Scoter numbered 5,000, also on the sea were 3 Great Crested Grebes. Others logged today were 25 Shelduck and 3 Little Egrets.
(AEH,AO+1,AS)  photo AEH
Posted by Colin at 10:22 No comments: 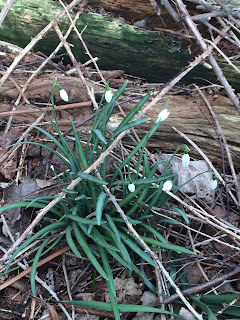 Weather: SE force 3/5, ice early
By far the highlight of the morning was a male Goosander which flew south down the west side of the island. A pair of Red-breasted mergansers were also logged along with 20 Common Scoter and 3 Great Crested Grebes. The Brent were counted at 184 including a single dark-bellied bird while the usual waders around the shore included 110 Knot and 2 Grey Plovers and on the island were 2 Song Thrushes, 2 Rock Pipits, a male Blackbird and a male Linnet. Fresh signs today suggest that the Red Fox is still present.
Snowdrops can now be seen on the island (right,AEH).

Weather: NNE force 4
Seen on the island today were 3 Purple Sandpipers, 165 Knot and 108 Turnstone, 3 Common Scoter and a Song Thrush.
(AAB,AS)
Posted by Colin at 16:38 No comments:


Weather: East F2-3. Cold!
A visit to carry out some maintenance work to the heli trap was planned to coincide with the forecast good weather. Unfortunately no work got done as the Obs members hosted an impromptu visit by a group who were visiting the island from Liverpool University. The group were shown some of the wading birds regularly seen around Hilbre before visiting the Obs for a talk about our activities. We were later visited by ranger Matt Thomas who’d come across with two visitors who were welcomed with a warming brew and a chance to get out of the biting wind.
Bird wise it was quiet with only three Purple Sandpipers being found at the north end. Several Grey Plover were feeding on the beach below the Obs along with a group of Knot and the usual Turnstones, Redshank, Oystercatchers and Curlew. The sea produced a small number of Common Scoter and a single male Red-breasted Merganser.
Passerines were represented by the long staying Song Thrush in the SK paddock and the usual Wrens, Robins and Dunnocks.  A Rock Pipit was at the south end and a small group of Meadow Pipits toured the island.
As the tide flooded some of the Brent Geese appeared below the Obs including the dark-bellied bird and colour ringed bird D/H (below,PSW). 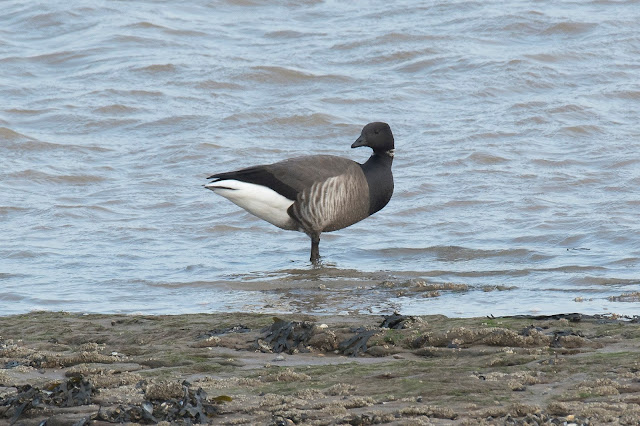 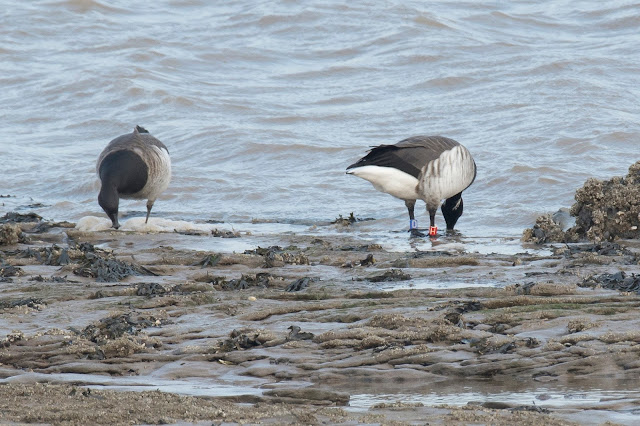 
Weather: Wind NE 2-3, cold with sunny intervals & occasional light rain.
Brent Geese remain in large numbers but were typically dispersed & difficult to count. As one observer left after the tide, numbers between the islands were estimated at 200 with three colour ringed birds noted (White H; Blue S) (Blue D: Red H) (Green/Red/Silver; Yellow T). Common Scoter numbers remain high, although nowhere near yesterday's levels, with an estimated 1000 birds noted, mostly at a distance but with a few birds close in around the island. Eight Whooper Swans were on the sea close to the windfarm, with one of these being later seen flying in off the sea at Hoylake.  Nine Goldeneye were in a single flock on the sea with 3 Wigeon and 4 Red-breasted Mergansers also noted. Two Red-throated Diver, 2 Guillemot and 40 Great Crested Grebe were seen. A Peregrine hunted the wader roost & appeared to have been successful when the freshly eaten remains of a Knot were found on the West side. Three Purple Sandpipers were seen after the tide with 400 Knot on the rocks at the North end early morning. 2 Stock Dove briefly flew around the island and several Skylarks passed through during the day.
A colour-ringed juvenile Cormorant was seen roosting on the whaleback & appears to have been ringed during 2015 at Puffin Island, although exact details are still awaited. The Shag seen around the island in recent days was unfortunately found dead.
(DB, RE+1, AEH, AS. CS, CJW + 1)

Weather: SW force 2/3 cloudy mild
The Brent flock were on the west side of the islands on the early ebb tide, and contained our old friend the blue and red ringed bird which was ringed (as an adult male) on its breeding grounds on Axel Heiberg Island in Arctic Canada on 2nd August 2007 and first appeared at Hilbre on 24th December 2008 and has returned to Hilbre each winter since (having been seen in Northern Ireland, Anglesey and Iceland on its travels to/from its breeding grounds).  The map below shows Axel Heiberg Island (author Kennonv on Wikipedia) - amazing to think this bird that winters around our small island in the mouth of the wonderful Dee estuary has probably flown in excess of 100,000km in its lifetime so far! (Information on movements of all our colour-ringed Pale-bellies Brents is from the Irish Brent Goose Research Group). 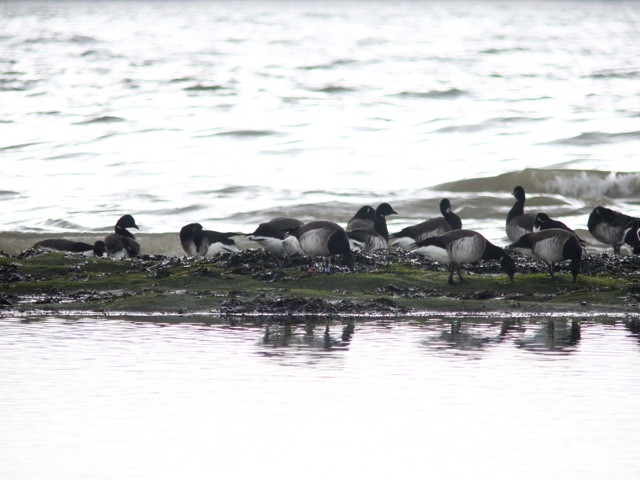 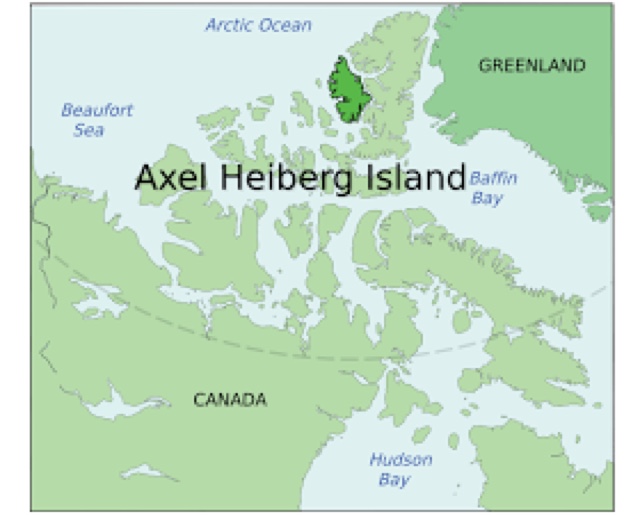 Also on the ebb were 190 Curlew near Little Eye and moving flocks of 4,000 Knot, 2,500 Dunlin and 19 Shelduck. On the sea were noted 8 Scoters, a Shag and 4 Great Crested Grebes. A Song Thrush, a Rock Pipit and a roaming flock of 17 Linnets were the best of the land birds while shore birds included 3 Little Egrets and a Grey Heron. 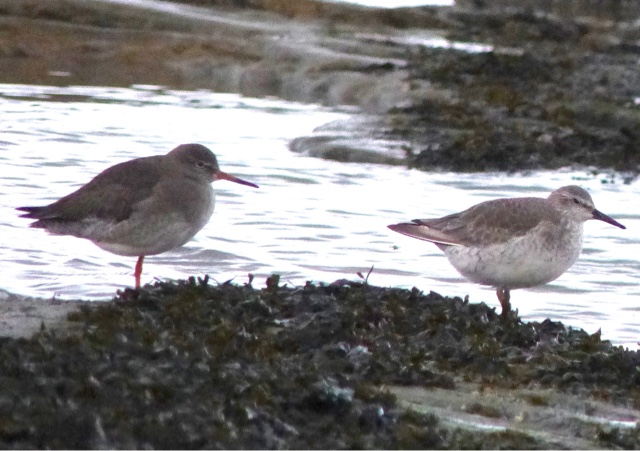