Weather:- light winds from the south west later veering west.
Two Redwings arrived in the night and the Chiffchaff and a Goldcrest were still present from yesterday. During the morning 4 Wood Pigeons flew to the south west. The 2 Red-throated Divers that drifted passed the obs yesterday did exactly the same today. A dark phase Arctic Skua were identified resting on the west hoyle bank for some time, but other seabirds were scarce with just 2 Gannets, 2 Guillemots and 5 Great-crested Grebes. Purple Sandpipers increased to 10, while Turnstones also reached a new high of 206. Only 2 of yesterdays 3 Rock Pipits appeared to be present.Two Little Egrets were on the shore.
Ringed:- 1 Goldcrest            [ 686-32 ]
(DB,AEH,AW, et al)
Posted by Colin at 14:28 No comments:

Weather:- light winds  S/SW
At high water (at about 07.15) 2 Great White Egrets flew south across the east gutter at Middle Eye and continued down the estuary. This is the second record of this species at Hilbre. There was a small movement of Goldcrests overnight with 6 in the trapping area, while a Chiffchaff, 5 Skylarks, 3 Rock Pipits and a Pied Wagtail were also noted. Two Red-throated Divers swan down the east side of the island and showed well from the obs. The Brent were counted at a record high for this season of 121 pale-bellied and 1 dark bellied and Shelduck increased to 420 in this part of the estuary, other duck seen today was a party of 5 Wigeon.  Purple Sandpipers numbered 6 at the north end and no less than 14 Grey Herons were in the Little Eye area. A late Red Admiral butterfly was on the island.
(DB)
Posted by Colin at 14:14 No comments: 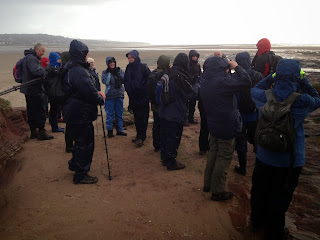 A low tide visit by a party from the Manchester area battled the wind and driving rain in their faces but thoroughly enjoyed their time on the islands. A late Sandwich Tern was on the West Kirby beach and was probably the Netherlands ringed tern from yesterday, although its legs were in the water and so we could not be certain. The Brent were scattered in small parties so could not be counted, unlike a flock of 8 Wigeon that flew south of Middle. The sea was again quiet despite the windy weather apart from a drake Scoter that hauled out at the north end. 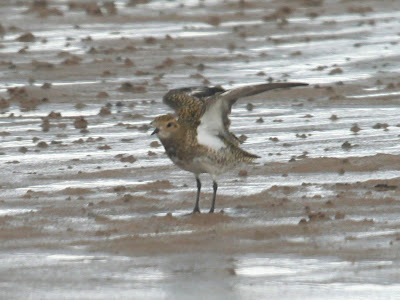 A single Purple Sandpiper was glimpsed at the north end, but the big surprise was finding one at Little Eye on the way off the island.
Also by Little Eye a lone Golden Plover rested from the wind (right), possibly the bird that has been around the Wirral north shore for some time.

Weather:- Wind NW force 7
Not quite the storms of southern england, nevertheless more was expected on the sea than transpired. The best seen were 2 Arctic Skuas and 25 Gannets, also a Red-throated Diver, 6 Guillemots, 5 Great Crested Grebes, 4 Scoter and a Razorbill. Waders included 130 Turnstone and 93 Redshank. A Mute Swan was seen to fly over little eye (AEH).
Meanwhile back at West Kirby a very late Sandwich Tern was found on the West Kirby lake pontoons. It was seen to be colour ringed and showed antenna for some sort of tracking system.
Enquiries have now revealed it was ringed in the Netherlands and printed here below for those that are interested (especially ringers) is an e-mail from the ringers in Holland. 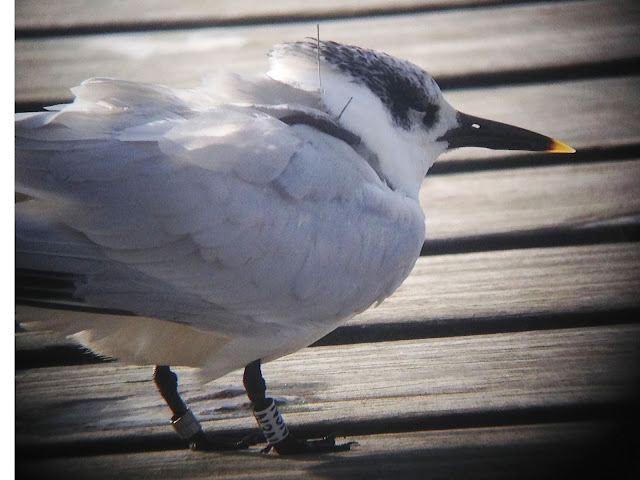 Thank you very much for reporting your sighting of White N3N. Thank you for also sending that picture of the bird and its tag. This is a data-logger powered by a solar-panel.


W-N3N was caught on the nest during the 2013 breeding season and has been seen several times before you saw it at West Kirby. This bird is certainly following a course all of its own.  In July of this year it made a brief visit to the island of Texel in the north of the Netherlands, then to Wales and now, five days after the last sighting it flew at least 300 miles north, maybe helped a little by the storm?. We hope to find out more about the routes and timing of these movements if it returns to a colony with its datalogger intact.
W-N3N (NLA ...1583878), >2cy, nest, 28 May 2013, de Scheelhoekeilanden, near Stellendam, Zuid-Holland, NL (51.48.46 N / 04.04.20 E), CR placed.


In 2013 we have managed to place nearly 400 colour-rings on Sandwich Terns, 28 of those on breeding adults like N3N. We have used a three-digit code always starting with an "N". The N can be followed by two numbers (N86), two letters (NHN), one letter and one number (NV7) or a number and a letter (as with your bird N3N). In most cases the colour-ring has been placed on the right tarsus and the metal (NLA) ring on the left tarsus. In some cases these positions have been reversed, for example when a bird already wore a metal ring.


These Sandwich Terns have been ringed in two colonies in the southwest of the Netherlands by a joint research group composed of the Research Institute for Nature and Forest/INBO, Bureau Waardenburg and the Ringgroep Delta. Through these colour-ringed birds we hope to gain a better understanding of habitat use, dispersion of juveniles and adults, age of first breeding and recruitment to the various colonies in the southwest of the Netherlands and beyond.


This year there have already been sightings of "our" birds from the North of the Netherlands, Belgium, England, Scotland, Denmark and France.I will let you know if there are any new readings for this birds over the coming months.


Thank you again, also on behalf of the other members of the Tern-Team and the previous observers of W-N3N

A short visit before the high tide was rewarding with a flock of 8 Eiders ( 2 males & 6 female / 1st winter types) seen flying past the north end and down the west side. Brent numbers are up to 77 with a single Dark-bellied amongst them.
A female Kestrel was busy hunting at the south end and evidence from photos (to be posted) later showed it to be the ringed individual controlled earlier this autumn.
There was a small passage of birds overhead with Skylarks, Grey Wagtail and a Chaffinch being recorded. There was also a small passage of Meadow Pipits through the morning. The only other birds of note were 3 Little Egret in the gutter and an increase in the number of Redshank.
Two new Blackbirds were ringed and one of the island born juveniles ringed earlier in the year was retrapped.       [ 685-32 ]
(PSW) 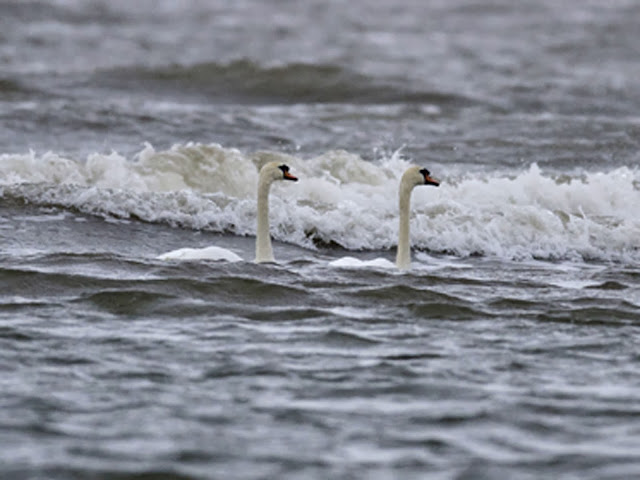 Weather:- W force 2/3, mild for October
Another search of the island pre-tide with little expectation now the westerlies are in full charge found few migrants of note. Two of the 3 Wheatears were ringed on previous days and obviously found it to there liking, as did the Goldcrest of yesterday, however a new Goldcrest was about also a Chiffchaff.
Passing through again were small numbers of Meadow Pipits, 4 Skylarks, a Grey Wagtail and a Starling. Four Wigeon flew about the shore where 43 Bar-tailed Godwits fed, but only 8 Brent could be seen this morning.
Ringed:- 1 Chiffchaff, 1 Goldcrest, 1 Wren.                 [ 634-32 ]
(CJ, et al) 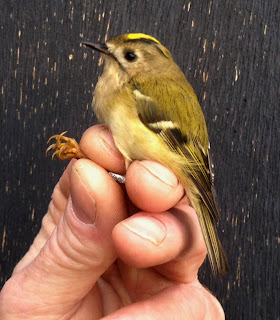 A brief visit before the tide found 2 Chiffchaffs and a Goldcrest on the island and 68 Bar-tailed Godwits feeding the east hoyle. The Meadow Pipit movements of recent weeks continued and 2 were ringed out of a flock of a dozen or so as they made there way south. Seventeen Brent were west of the ridge south of middle on the flood tide. A Peregrine earlier sat undisturbed on the cliff west of the north end.
Ringed :- 2 Meadow Pipits, 2 Chiffchaffs, 1 Goldcrest (left)          [ 631-32 ]

Weather:- WNW force 4, 16 degrees by noon
Some insect activity with 2 Migrant Hawker dragonflies, 6 Small Tortoiseshells, 2 Peacock and 2 Red Admiral butterflies, also several Small and Large Whites.
The observatory hosted an advertised general public visit and bird ringing demonstration during the day, and although as expected there were not many migrants, we were able to show some ringing and talk about our work at the observatory. Two Wheatears a Chiffchaff and a Goldcrest were on the ground and flyover movement included 36 Skylarks, 4 Starlings, 2 Pied and a Grey Wagtail and a passage of well over a hundred Meadow Pipits during the day. Most Sandwich Terns have now departed south but a single was logged today. At high tide 2,500 Dunlin were recorded with 5 Guillemots and 4 Common Scoters on the sea.
Ringed :- 1 Wren, 1 Chiffchaff, 1 Meadow Pipit.  [ 626-32 ]
(CJW,NDW)

Weather NW force 3/4, clear visibilty, Blackpool tower visible
No warblers present, but  the wheatear ringed previously is still on the island, also 2 Rock Pipits and a Grey Wagtail plus 2 albas. The Brent Geese increased to 18 birds, but the scarcest birds of the day were a pair of Tufted Duck. A leucistic Oystercatcher stood out amongst the flock resting by the obs (bottom), Oystercatchers are estimated at 9,500 around the islands at this time. 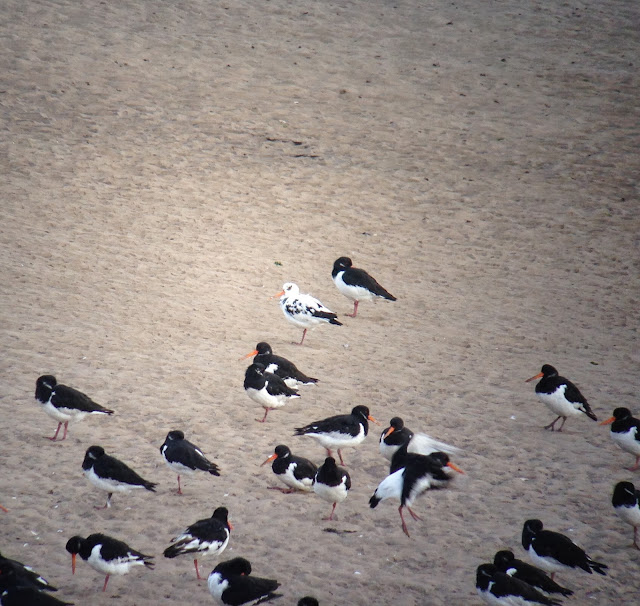 "Weather: wind SE force 3/4 increasing force 5, mist, cloudy with brighter intervals
Observers were greeted with a stunning sky this morning but expectations had been lowered over recent days as to what birds may be found.

October is the month when special birds are expected in the coastal hotspots, however the headline today must be the finding of a new insect for the island. Mid morning a Black Darter dragonfly was found on the main track near the Heli and was seen three or four times along the centre of the island, unfortunately it was too mobile to be photographed but was very welcome in what has been generally a poor year for dragonflies on the islands.

One or two Rock Pipits have evaded the potter traps in the last week or so but two succumbed today to the tasty meal worms on offer and indeed another was trying to enter the traps at the same time proving there were three present today, a fine reward for the Obs members persistence over the previous two weeks. We have not ringed a Rock Pipit for some time and two together is a bonus indeed. 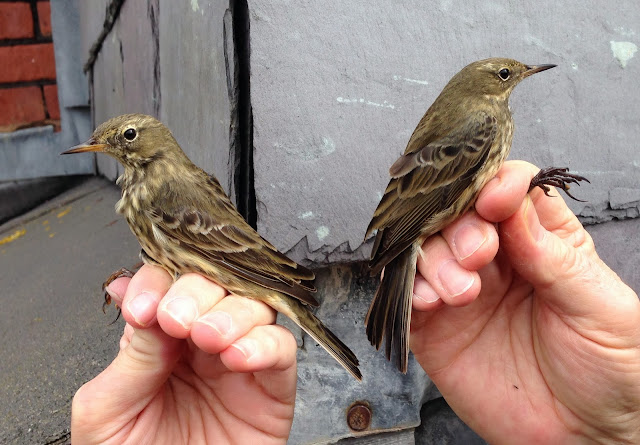 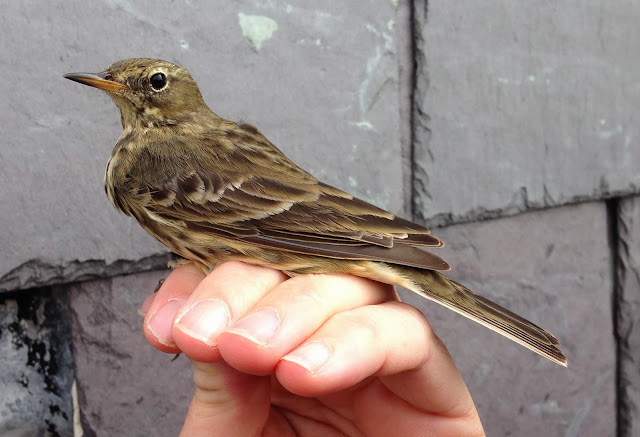 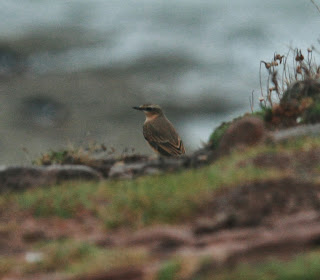 A Song Thrush was in the trapping area early but little else, the only warbler being a Chiffchaff ringed yesterday. A Merlin was in the south cove for a while; a strange mixed flock flew between the islands consisting of 8 Wigeon, 4 Teal and a single Brent (which could not be refound). Late morning a Greenland Wheatear landed (left), the first on the main island for many days now and was duly ringed.
On the sea were noted 3 Gannets, 3 Guillemots, 5 Scoter and a Great Crested Grebe, while on the shore a Little Egret and 35 Bar-tailed Godwits.