Weather: W force 2/3
Three Arctic Skuas were seen near the islands today, 2 dark phase and 1 light phase, while a single Arctic Tern, a Gannet, a Great Crested Grebe and a Guillemot was out to sea. On the ground was a Willow Warbler, a Wheatear and 3 Pied Wagtails. Waders noted included 5 Whimbrel, 30 Ringed Plover, a Bar-tailed Godwit, a Sanderling and 25 Curlew. A Peregrine was seen to chase and catch its prey over the east hoyle.
Posted by Colin at 15:55 No comments:

Weather: WSW force 2/3
Two Meditterannean Gulls were seen from the obs, an adult winter and a first summer. A juvenile Wheatear was present, while around the shore were 12 Whimbrel. Over fifty Little Terns were noted and a very high count of 716 Grey Seals were hauled out on the west hoyle bank.
Ringed: 1 Wren          [ 304-26 ]
Posted by Colin at 15:10 No comments:

Weather: SE force 0-1 slight drizzle at times
The first Willow Warbler of the autumn arrived today after some drizzly rain, the main passage is expected in about 2 or 3 weeks if the conditions are suitable. The best of the rest today was a single Common Sandpiper and a Manx shearwater seen out to sea with 3 Gannets and a Red-breasted Merganser. Fourteen Whimbrel was an impressive total.
Another Wheatear passed through the island today. Waders included 85 Dunlin, 84 Sanderling and 85 Curlew.
Posted by Colin at 15:41 No comments:


Another 2 Arctic Skuas were present today and the terns were counted at just over 1,000 Sandwich Terns , 350 Common Terns and a surprisingly high total of 127 Little Terns, testament to the sucess of the Gronant colony this season. Both Mediterrannean Gulls are still about. Highlights on the sea today were the sightings of 2 or 3 Harbour Porpoise and 2 Bottle Nosed Dolphins. Thirteen Great Crested Grebes sat on the calm sea. Young birds bred on the island showed themselves today, see Wren, Linnet and Meadow Pipit (at bottom of page) below.

Weather: S force 1
There were two Mediterrannean Gulls present today, the first summer from yesterday also an adult. Six Whimbrel, 2 Little Egret, 400 Dunlin, 10 Turnstone and a Bar-tailed Godwit were noted with a Red-breasted Merganser and a Common Scoter on the sea.
The moth trap last night was very productive and during the day flying butterflies included 12 Green-veined White, 15 Small White, 8 Large White and a Red Admiral. The Grey Seals hauled out are now peaking at over 400 animals.
Posted by Colin at 15:18 No comments:


A first summer Mediterrannean Gull was among the 1,000 or so Black-headed Gulls to the east of the island in the evening light and later still the 2 Common Sandpipers seen earlier could be heard calling about the rocks below.
Earlier an immature (or female) Eider was noted on the sea. Good numbers of waders are now appearing including 13 Whimbrel, 12 Sanderling, 19 Redshank, 9 Turnstone and a summer plumage Bar-tailed Godwit. Terns counts today were 71 Little Terns, 850 Sandwich terns, 200 Common Terns, also 2 Arctic Skuas obviously attracted by the number of terns. Seven Little Egrets on the shore was a good count, even for this time of year. The only small migrants were 5 Swifts, 4 Swallows and a single Wheatear. [300-26]

Weather: N force 3, thunderstrom early then sunny and warm
A very brief visit before the tide found the first warbler of the return passage in the form of a Chiffchaff in the 'heli' trap.
Another good find was a juvenile Wheatear, following on from the 2 on Middle at the weekend, this time towards the north end of the main island. In the same area was a more unexpected visitor at this time of year, a Skylark which was down on the short turf of the island for a while.
As the tide flooded over 300 Sandwich and 100 Common Terns were very vocal and the recent rapid build up of Black-headed Gulls was noticeable. A Whimbrel, 2 Little Egrets, 12 Redshank and 2 Ringed Plovers were noted before the tide totally claimed the shore. A moth was found on the window of the obs this morning and after examination and checking it was identified as a Barred Red (below SRW), a first for the island. This species is usually associated with conifers but there are none on the island. 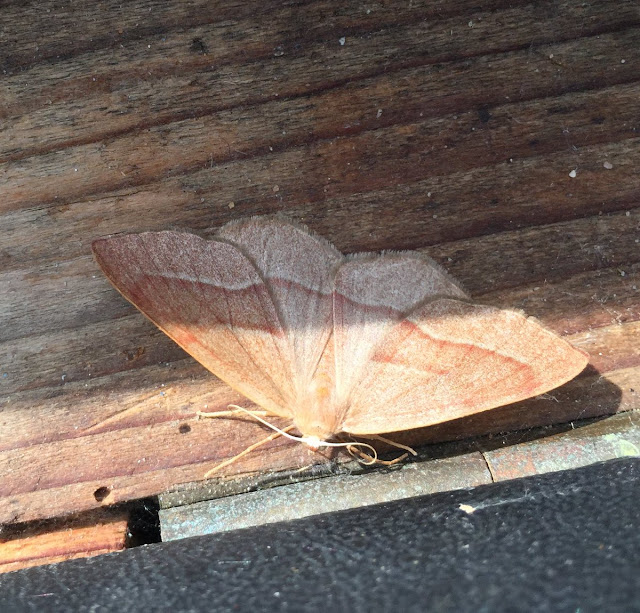 Weather: NW force 3/4 cloudy at first then sunny and warm 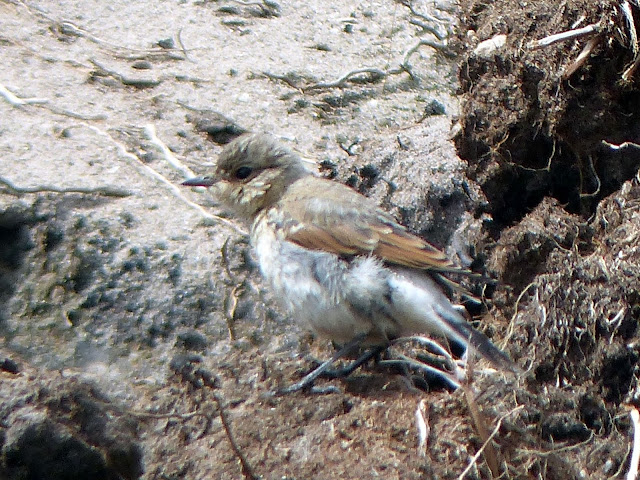 Two juvenile Wheatears were about the rocks at the north east corner of Middle (above,CJ), indeed they were still there after the tide. Three Swifts and a couple of swallows flew north west through the island during the morning. On the sea 20 Gannets fed and 14 Little Terns flew north out of the estuary as the tide ebbed. On the shore 3 Little Egrets and 5 Whimbrel were noted. Both Kestrel (scarcely seen so far this year) and Peregrine made an appearance, the Peregrine scattering the terns and waders. As the sun warmed things up later in the morning many butterflies started to show including 20 Small Whites, 6 Meadow Browns, 6 Small Tortoiseshells, 4 Red Admirals, a Garden Tiger and 2 Cinnebar moths.

Weather: NW force 2
Thirty five Gannets were on the sea and 450 Sandwich Terns in the post breeding roost around the island. Three Whimbrel and a Little Egret were also noted today.
Posted by Colin at 15:02 No comments: 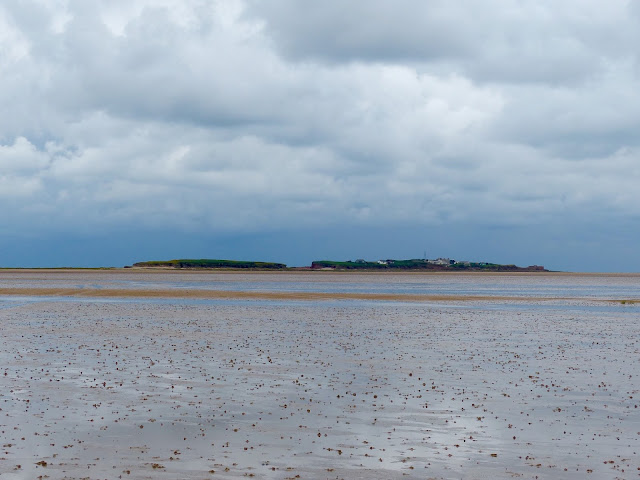 Best records today were an early autumn Greenshank and 3 returned Whimbrel. Other waders today were 12 Redshank, 12 Curlew and 32 Dunlin. Three Rock Pipits seen including one displaying at the north end of Middle.

Weather: SW force 1
Recorded today were 320 Sandwich Terns and 30 Common Terns and 18 Curlew. Just outside the obs door were 4 Wrens including 3 juveniles, looking like they have just fledged. Two adults and a juvenile Pied Wagtail were also seen today. A count of the Hilbre Grey Seals revealed 320 individuals and 3 possible Common Seals.
Posted by Colin at 14:52 No comments: