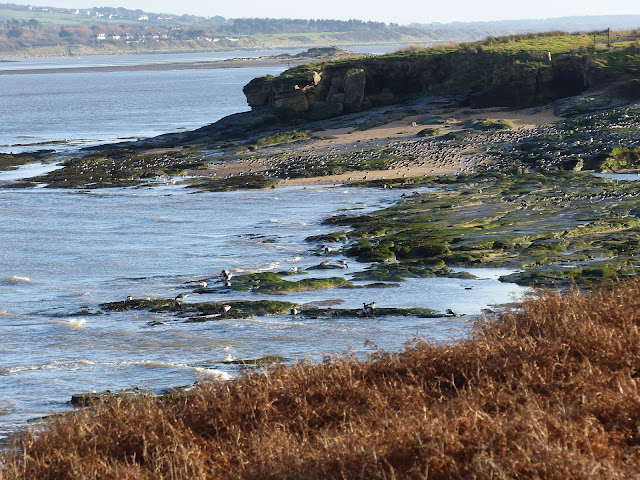 The highlights of the last day of the year were a female type Eider that drifted up the gutter with the tide and 6 Pintail which flew in from the north after the tide.One of the Grey Herons still likes to spend it's time on top of the island, even remaining when the tide ebbs. 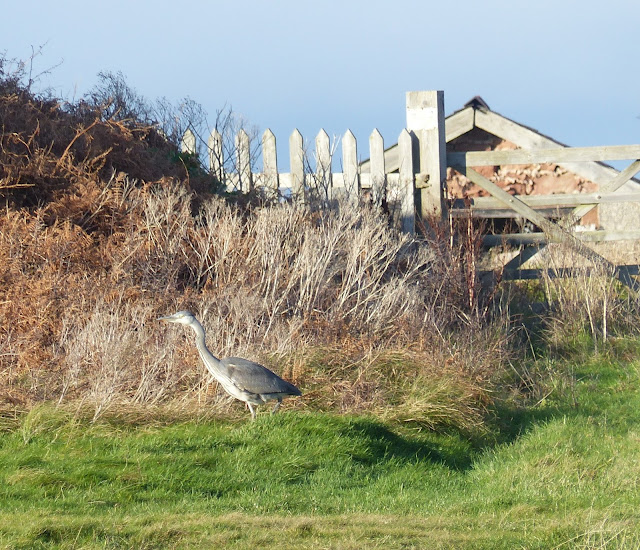 There was a Rock Pipit on middle and one main island, wile Oystercatchers roosted on the west side all the way along to the mast. 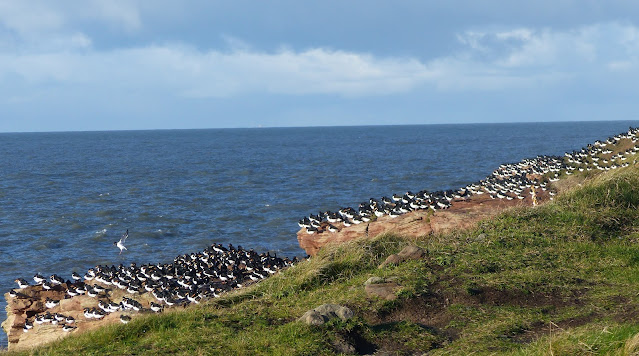 There were 15 Purple Sandpipers today. 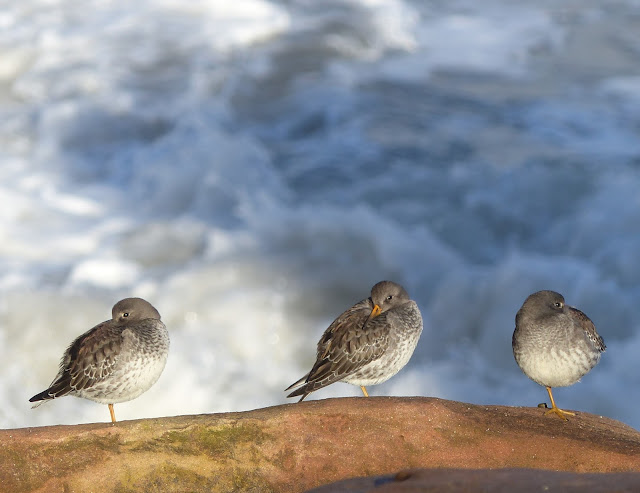 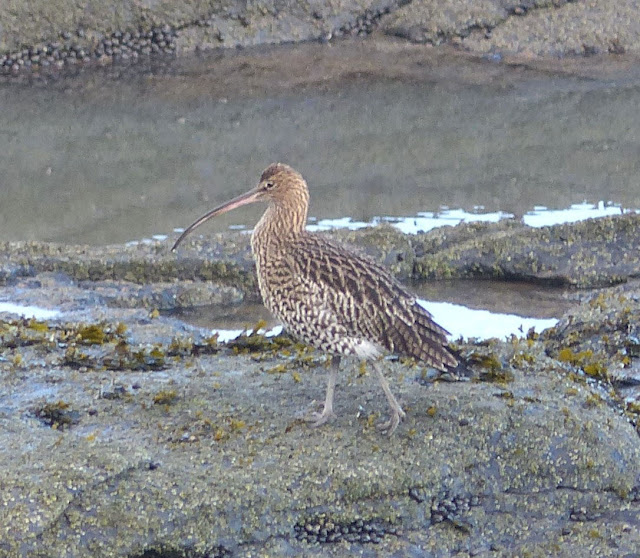 Eleven Red-throated Divers were noted on the sea. A Peregrine with a kill sat on the  east hoyle after tide. 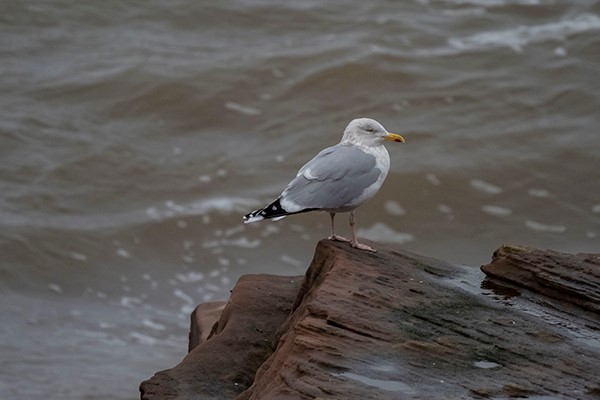 The weather started off wet, cold and blustery with a brisk N E wind before improving slightly after the tide. Arriving in the dark was a good time just to see the Wrens depart from their roost above the Observatory annexe as dawn broke. A short sea watch produced the expected Common Scoter but with a bonus of a fly past male Velvet Scoter that landed with the Common Scoter in the area between the green buoys. Six Red-throated Divers were recorded along with a single Great Crested Grebe. The Purple Sandpipers roosted in a slightly different place from usual keeping out of the wind but as soon as the tide dropped they flew in to feed at the north end. 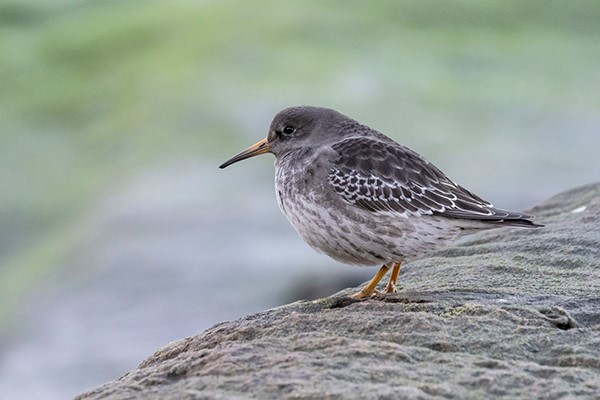 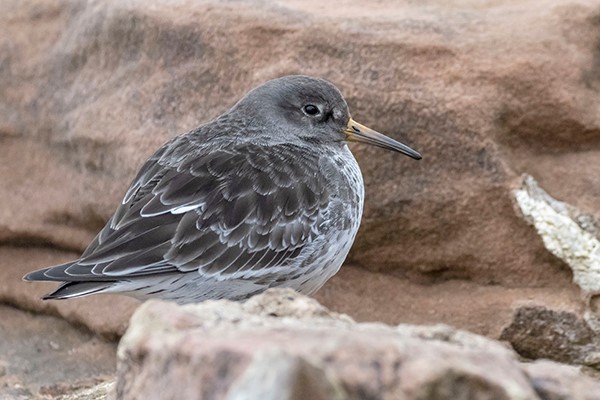 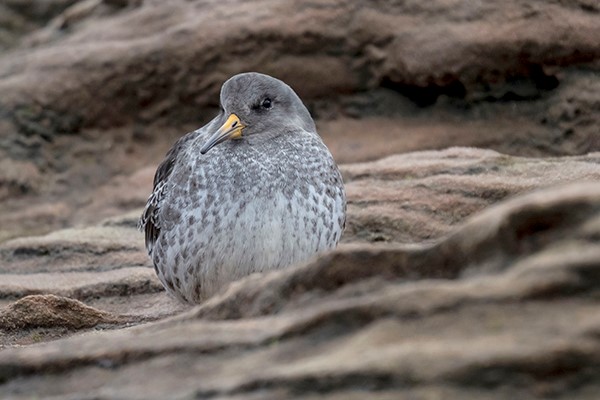 A Grey Heron sat out the tide on top of the cliffs by the Old Obs garden and good numbers of Redshank and Turnstone roosted in Niffy Bay. 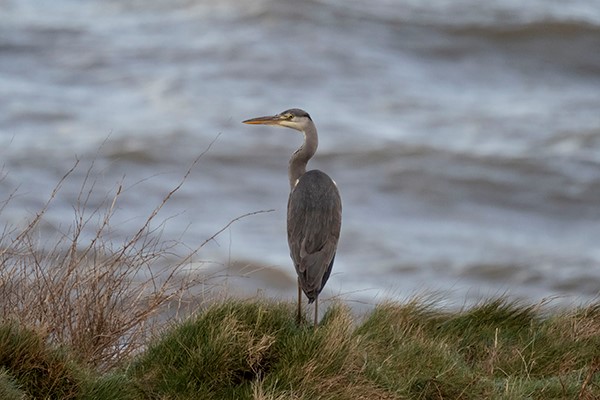 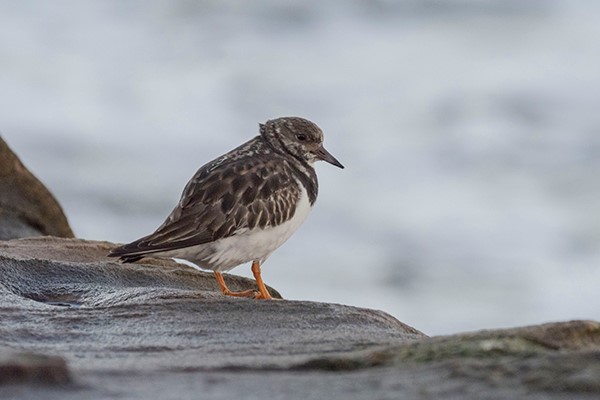 Two Song Thrushes continue to everwinter on the island along with at least one Blackbird also seen.  A single Rock Pipit was also present. The female Kestrel continued to show well as she hunted for voles and was see not catch one and fly to a sheltered spot on the west side to eat it before continuing her quest for food. 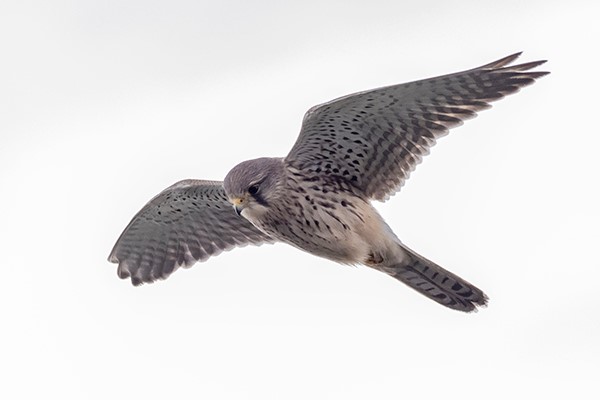 A few Grey Plover were seen along the gutters edge and large numbers of Dunlin & Knot were seen out on the West Hoyle banks. 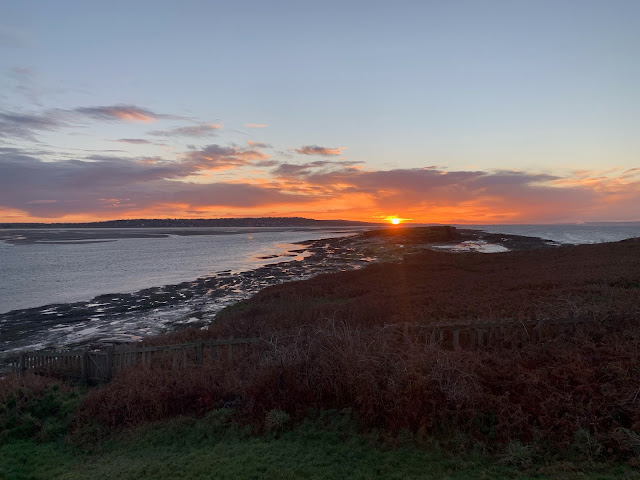 A cold breezy start to the day and as the tide flooded good numbers of Knot moved around the islands with Curlew and a few Grey Plovers calling as they pushed up, feeding on the tide edge. Oystercatchers (8000) roosted across the North end of middle and also the SW corner of Hilbre and up to above Lady’s cave, 59 Ringed plover also roosted on the main island over the tide and the Purple Sandpiper count remained at 9 birds, several flocks of Sanderling buzzed about and over 200 birds fed manically as the tide ebbed. 148 Brent Geese were noted and Niffy bay hosted 120 Redshank and 169 Turnstones! Three hundred Dunlin mixed in with the other waders and 12 Bar-tailed Godwits were amongst 108 Curlew. A Little Egret and 2 Herons fished the pools and roosted over the high water whilst close in at the North end 4 Great Crested Grebes also fished next to a solitary Red-throated Diver. Good numbers of Wrens are still present as well as a couple of Blackbirds and a Song thrush that has gained a few grams of fat over the last few weeks, the Kestrel hovered about the islands only being interrupted by the Carrion Crows. Meanwhile some external maintenance work continues around the Obs and trapping areas while the rain had a day off!

A brief visit today to carry out the WeBS Low Tide count, produced some fairly impressive wader counts including 8900 Oystercatcher, 8650 Knot, 2120 Dunlin and 211 Grey Plover. Eleven Purple Sandpipers fed at the north end. 1400 Common Scoter were offshore while 237 pale-bellied Brent Geese fed around the islands. On the sea were three Great Crested Grebe while a Red-throated Diver fished close in to the North end. 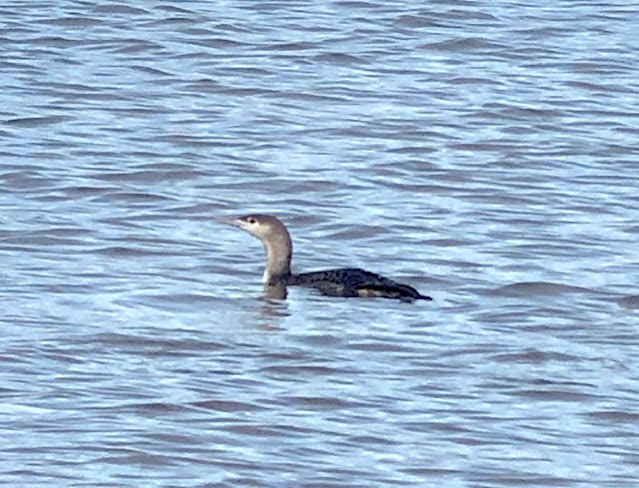 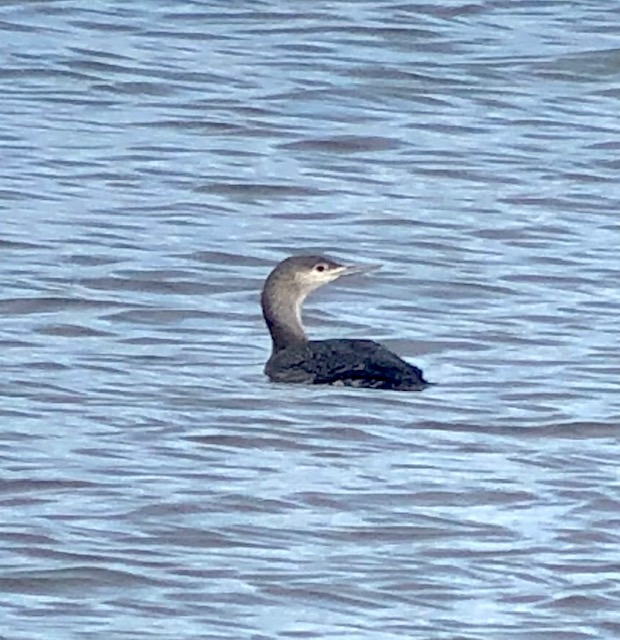 A Peregrine and a Kestrel hunted the islands.

A good selection of waders today, including Grey Plover and Bar-tailed Godwit. Nine thousand Oystercatchers roosted the tide on Middle, while 4000 Knot and 1000 Dunlin provided a supporting cast with more of both species feeding on West Kirby shore as observers left the island. 15 Purple Sandpipers roosted the tide with 14 at the north end and 1 in Niffy Bay. 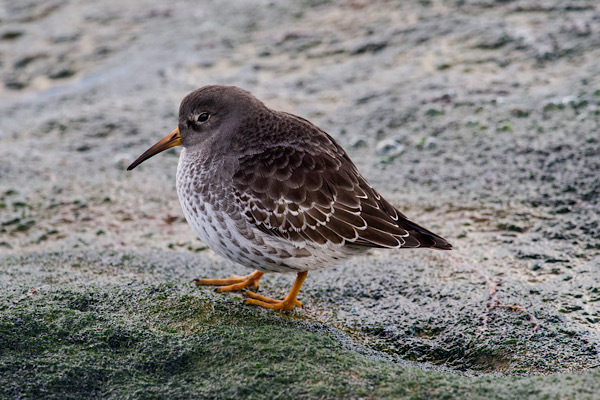 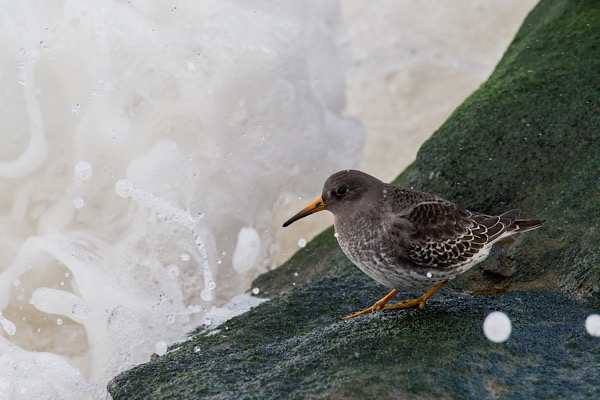 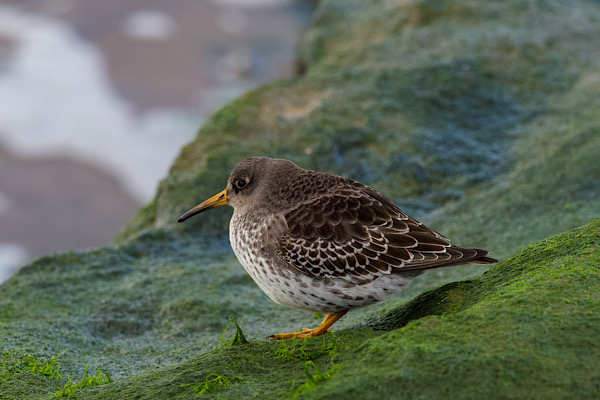 Brent Geese were again well spread out and the 110 were counted between Hilbre and Middle before the tide were only a percentage of the total in the estuary. A lengthy sea watch over the tide proved worthwhile with 12 late Gannets and 35 Red-throated Divers the highlights. 600 Scoter were on the sea with 20 Great Crested Grebe, 14 Guillemots and a Razorbill also counted. Both Peregrine and Kestrel were noted but passerines were scarce, although 2 Song Thrushes remain on the island. 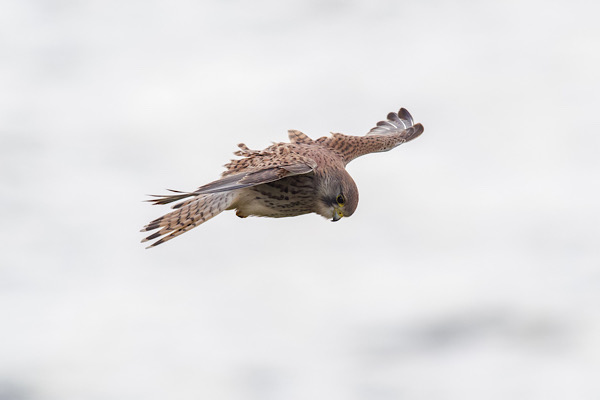 The Fox was seen again.