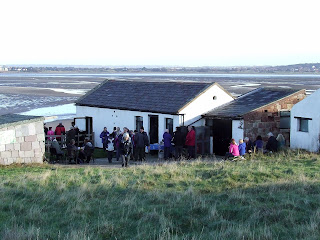 A fine day for the RSPB date with nature event (left) which was well attended and served many cups of tea!
The best bird of the day was a female Goldeneye on the sea, but there were several good counts made of the regular inhabitants of the estuary at this time of year including 268 Shelduck, 7,000 Dunlin, 2,000 Knot, 150 Brent geese (with 1 dark-bellied form) and a peak for the autumn/winter of 620 Curlew. Others noted today were a Peregrine and a Little Egret. Passerines present included 6 Robins, 3 Blackbirds and a Song Thrush. 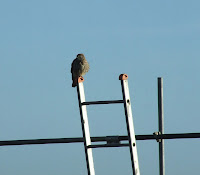 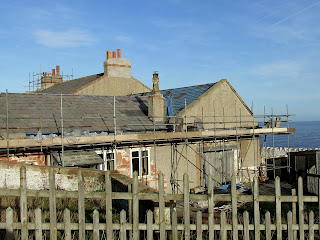 Work is progressing on repairs to the buildings on the island, and the female Kestrel took advantage of the new perching opportunities.
(DB,JE)             photos  JE
Posted by Colin at 10:43 No comments:

Weather:- wind:- SSW, still air
Seen on a mirror like sea, about 2,500 Common Scoters out towards Wales, 250 Great Crested Grebes, 8 Red-throated Divers and the first Goldeneye of the winter. Thirty five Bar-tailed Godwits and 7 Purple Sandpipers.
Ringed:- 1 Song Thrush  [ 689-32 ]
(MJA,MB,NDW,SRW)
Posted by Colin at 11:31 No comments:

Weather:- ENE,NNE force 2/3 sunshine,lake district visible
One Rock Pipit north end of Middle, no sign of the Snow Bunting, 2 Starlings, 1 Song Thrush, 60 Shelduck, the female Kesterel that has been here for some time.
(DB,CJ, et al)
Posted by Colin at 11:34 No comments:

An early tide meant driving across to Hilbre in the dark. As dawn broke a Song Thrush was caught in the Heli trap and was found to have been ringed on the island during a previous winter. A new Dunnock was also ringed.


With few migrants moving seawatching was once again the order of the day. At least 450 Common Scoter were noted in a three hour seawatch over the tide. Most were heading west towards N Wales. Highlight were the  2 male Velvet Scoter heading west amongst a small party of Common Scoter. Their bigger bulk and broad white secondary patches being obvious in flight. A small group of Common Scoter did spend the time flying around between Bird Rock and the East Hoyle bank

. A few Gannets were recorded and there was an increase in Red-throated Diver numbers. An Obs member watching from the mainland had a possible Black-throated Diver which may potentially be a returning bird as one had been seen regularly over the last winter period.
The Purple Sandpiper flock was reduced to 6 birds and they spent the tide roosting on a rocky ledge on the west side as did a flock of about 40 Turnstones. As the tide ebbed the Turnstones started feeding on the rocky shore bellow the Obs and one was seen to be colour ringed with  red over pale green on the left leg indicating it was ringed in the winter of  2008/09.

Weather:- S force 2 then W 3
Parties of Starlings totaling 149 including 100 moving south, a Skylark and 3 Goldfinches on the feeders. A female Kestrel and a Peregrine.
(DB)
Posted by Colin at 10:45 No comments: 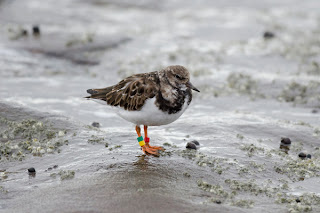 An early morning visit was followed later by an afternoon trip staying over the tide. A maximum of 9 Purple Sandpipers were seen - 8 roosting in the tide gauge & 1 seen flying off to Middle to roost with the Turnstones. A small flock of 10-12 Common Scoter spent the time splashing around on the sea near HE52. Surprisingly 4 Gannets were seen fishing throughout the period between Hilbre and the wind farm. Less surprising were the Great-crested Grebes and single Red-throated Diver.
The colour ringed Turnstone from winter 2007/08 was photographed just before high tide- see photo.
The ringed female Kestrel spent the afternoon hunting Short-tailed Field Voles and was seen to be successful on at least two occasions - see photo where you can just make out the ring on the right leg. 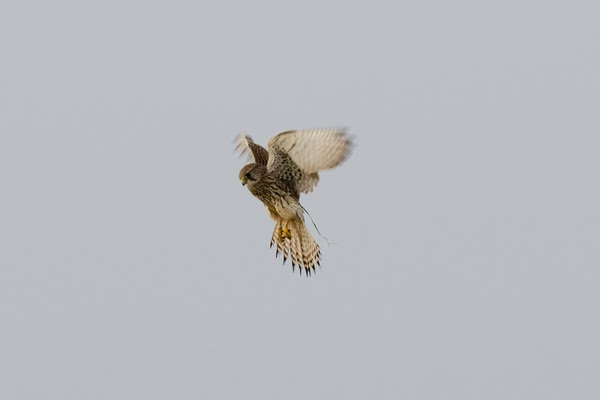 Weather:- wind S at dawn then WSW force 3, rain from mid-morning
Very little in the trapping area, just the Chiffchaff from the last 2 days, 2 Blackbirds and a Song Thrush, although a Reed Bunting called overhead for a short while, and a single Starling and Pied Wagtail passed south. A few Gannets fed off the north end, and also noted there were 2 Razorbills and 8 Great-crested Grebes. Eight Purple Sandpipers sat out the high tide as did a new high number of 250 Turnstones. A Kestrel was often seen hovering and 2 Peregrines were hunting the waders. Bird of the day was not on the island but on the West Kirby marine lake after high tide, a red headed Goosander that was soon unfortunately flushed by a boat. In the afternoon a Mute swan flew towards Hoylake shore.
Details just received of the ringed Black-headed Gull that was on the West Kirby marine lake on 30th September (see blog for that date) reveal that it was ringed as a second year bird in Sweden in 2001, and has been seen in Denmark in March in 2010 and 2011 before appearing with us this year.
Ringed:- 1 Wren      [ 687-32 ]
(DB,CJ,CJW, et al,THM,RAE,CF)
Posted by Colin at 14:46 No comments: