Although the wind was still in the south east, cloud all night prevented any movement and there was just a single Willow Warbler and single Wheatear to be seen this morning although 82 Swallows went through during the day.
This lack of activity meant that attention could be given to the sea over the high tide. Almost immediately large numbers of seabirds could be seen in a feeding frenzy about half a mile out towards the original wind farm. The majority were Manx Shearwaters that were circling the area as they joined the throng from both directions, others moved off and attached themselves with

another group further north. After watching the spectacle for some time estimates were made of 700 + shearwaters (below) and 100+ Gannets, and a few terns (apologies for poor images [click to enlarge] but they were a long way out!). A single Arctic Skua was seen early on but it was surprising others were not attracted to the group, in fact the only 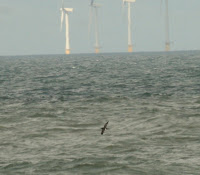 other sea-birds noted were the regular terns and single Guillemot and Great Crested Grebe.
A Cormorant saw the tide out on the Turnstones west cliff roosting ledge (below) and just 1 Whimbrel could be found around the rocks. 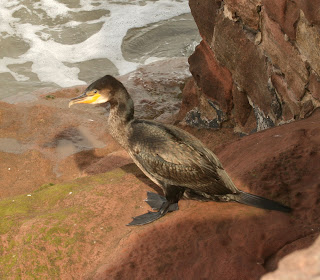 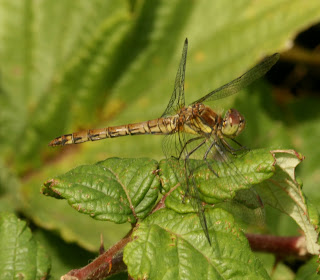 The butterflies responded to the sunshine and Painted Lady, Speckled Wood, Grayling, Small Copper and Common Blue all made a showing along with Migrant Hawker and Common Darter (above).
Ringed :- 2 Meadow Pipits
(DB,CJ,KMc) [478] photos CJ
Posted by Colin at 11:33