A sunny morning meant it was very clear overhead and movements of migrants were very limited over the island; despite the hope that a Ring Ouzel found at nearby Red Rocks gave, 40 Meadow Pipits, 2 Goldfinches and a Grey Wagtail were the only birds moving over the main island in the morning.
Observers who went expecting to see their first Wheatear were initially disappointed but during the morning one appeared on the path on Middle island although it did not stay and was certainly gone by noon. 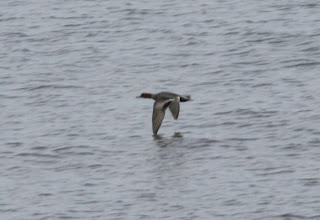 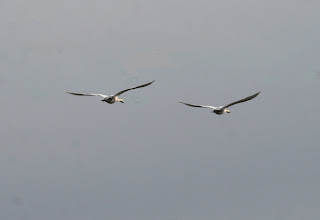 A male Wigeon floated off the north end and then flew west (above), 2 Mute Swans flew east over the island (above), and the Velvet Scoter still resided in its favoured patch of sea.
(DB,JE+1,CJ,SRW,TGW) +ESCA (happy birthday !) photos CJ
Further updates for the last few days below:-
Posted by Colin at 13:58