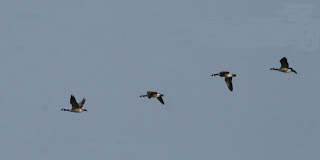 A lazy morning was largely spent staring out to sea from the north end in the lee of the gusty south easterly wind in the hope of some seabirds and some reward came in the form of 7 Manx Shearwaters up to 3 at a time moving in a south westerly direction. About 20 or so Sandwich Terns and 5 Gannets were distantly towards the wind farm and the run of Canada Geese continued with 4 and then 9 flying close to the island (above). Eight Swallows, 4 House Martins and 5 Swifts drifted in over the sea during the morning. 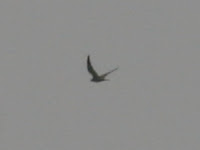 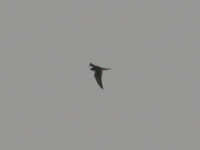 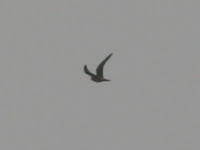 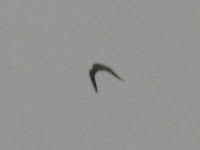 At 11.20hrs a Hobby flew from the direction of the Point of Air, over Middle Eye and off towards West Kirby (4 pics). Unfortunately it was quite high and did not come closer to the obs than about 500 yards, hence the very poor quality images. As is often the case when the island is quiet, possible good birds were mentioned on the wish list for the day and Hobby was certainly amongst them, however there were a few others on the list that were not seen !
(DB,CJ) photos CJ
Posted by Colin at 13:56