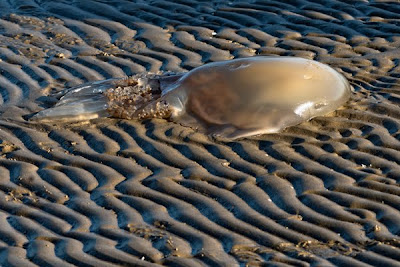 north. At the same location but a little later 2 Waxwings were also calling as they flew off to the south/south east. A Raven flew south during the day and 2 Teal were noted.
There was a mass stranding of over 50 of the large jellyfish rhizostoma octopus (right) on the shore between Little and the east hoyle bank. This jellyfish has a domed appearance and is quite solid in texture and has 8 leg-like tentacles - hence the scientific name.
(DB,JE,PSW,et al) photo PSW
Posted by Colin at 16:59