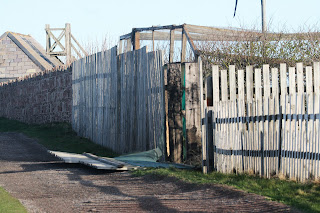 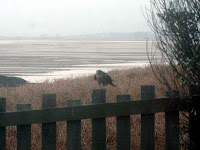 After yesterdays strong north easterlies observers were greeted this morning with fences down across the main pathway (left), but as there was very little bird activity there was plenty of time to get out the hammer and nails. The Merlin was on the obs fence this morning seeming to look for prey amongst the pittisporum bush, but it didn't appear to have any more luck than us in bird finding today (pictured above through a salt sprayed window). Most pleasing bird of the day only arrived after noon when the first Swallow of the year flew north over the obs. Other migrants were scarce indeed this morning, 1 Goldfinch, 2 Pied Wagtails were about the extent of it. The sea was also quiet although a Little Gull was identified distantly towards the north west and 2 more Sandwich Terns showed along with 22 Common Scoter, 9 Great Crested Grebes, 3 Guillemots and a Red-throated Diver. A group of 150 Sanderling were on the flood tide edge west of middle, 170 Turnstones still remain with at least 3 Purple Sandpipers (there may be more). Both Kestrel and Peregrine appeared at some stage during the day, and 2 Little Egrets were west of the islands at noon. Two or three Small Tortoiseshell butterflies flew as the wind dropped later in the morning.
(DB,AEH,CJ,CS+1,CJW et al)        photos  CJ
Posted by Colin at 15:39