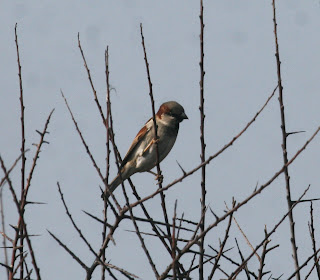 A clear sky this morning but with plenty of mist in the estuary to give hope of some migrants especially with the south easterly breeze (usually a good sign at Hilbre). A few birds obliged but no large numbers as may be hoped for later in the spring. The two best birds were a Blue Tit and a male House Sparrow (left), both common on the mainland but scarce visitors to Hilbre, each stayed for about an hour but neither being caught for ringing (although the Blue Tit came very close, shooting back out of the box end of the SK trap). A female Chaffinch was more obliging for the ringers. Only a few Meadow Pipits were about, one showing a display flight, but there were 2 new Blackbirds on the island and 8 Pied Wagtails, 2 Grey Wagtails and a Siskin few over while a Skylark was flushed at the north end before disappearing. A sea watch was mostly fruitless, just a couple of Great Crested Grebes and a female Scoter (which has been around for a few days) to be seen. A dead Conger eel was noticed on the sands to the east of the island and was the subject of interest by a pair of Great Black backed Gulls. It was brought to the obs garden for inspection and it proved to be a very impressive huge female that measured almost 6 feet in length and would have weighed about half a hundredweight. Spring really arrived today in the wildlife garden when frog spawn appeared in the pond, it wasn't there on Sunday !
﻿﻿﻿﻿﻿﻿﻿﻿﻿
﻿