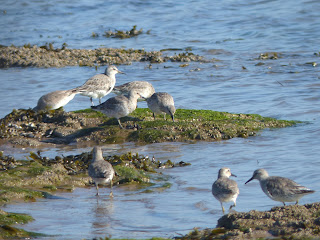 A beautiful bright sunny day, and although the breeze was cool, the sunshine triumphed in the end, warming the air sufficiently for a few butterflies to venture out. Three Painted Ladies were on the west side, only the second record this year, also found was a Gatekeeper, a Peacock, 4 Green-veined Whites and a Cinnebar moth. Birds were few and far between leaving plenty of time for discussion and relaxation at the obs. Most of the small waders have indeed departed now, leaving about 12 Ringed Plover, 9 Dunlin, 4 Sanderling and a flock of 10 winter plumage Knot feeding in the gutter (above,CJ). A single Whimbrel and a Curlew still called occassionally. A House Martin was the only small visitor to be noted passing through, larger species moving were over 30 Black-headed Gulls and 6 Shelduck. The only seabirds were a small number of Common and Sandwich Terns. We suspect the Rock Pipits may have fledged, we will look for the young birds in the days to come.
Ringed: 2 Linnets       [ 333-33 ]
(AEH,CJ,KMc+SD, et al)
Posted by Colin at 15:39