The main purpose of Sundays visit was to carry out some essential repairs to the heligoland traps but a brisk N W force 5 wind meant there was quite a bit to see on the sea as well.
Good numbers of Gannets, Manx Shearwaters and terns (including one flock of 52 Little Terns) were recorded along with a single adult pale phase Arctic Skua. Two juvenile Wheatears dropped in over the high tide and another was seen on the rocks at the south end of the island as the observers approached. Apart from the Wheatears there were no other grounded migrants present. Wader numbers are building up with 300 + Dunlin,  32 Ringed Plover, 7 Sanderling, 7 Whimbrel and 3 Turnstone being logged in the roost on Middle Eye. For the first time for ages a Short-tailed Field Vole was seen near the heli trap but the only butterfly present was a Red Admiral. 302 Grey Seals were counted hauled out on the West Hoyle bank before the rising tide forced them off. 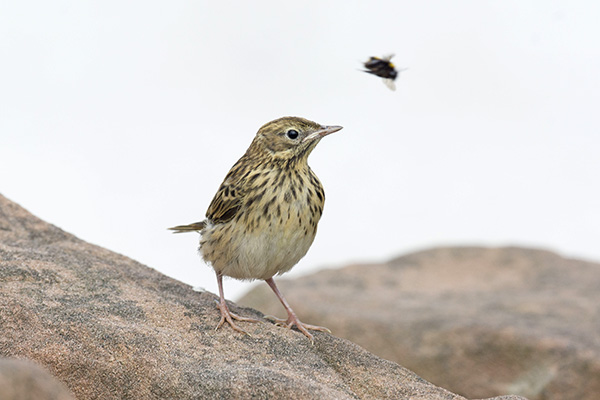 A brood of young Meadow Pipits were being fed by their parents and one provided a good photo opportunity as it was photo-bombed by a bee!
There is an archaeological dig taking place on the island at the moment that is turning up some interesting finds. We look forward to hearing more about them at a future date.
Ringed: 2 Linnets            [ 317-27 ]
Posted by Colin at 10:07