Spring 2008 was excellent on the island for the capture of redpolls - the iPod was used to attract flyover redpolls into the Obs garden. In amongst good numbers of Lesser Redpolls there was a sighting of a Mealy Redpoll (6th May) and the following Mealy was later caught on 6th May: 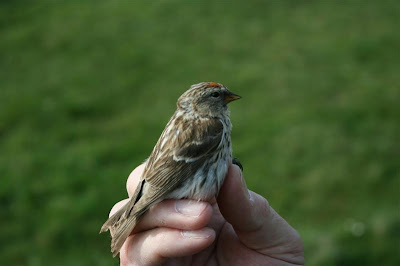 Then on the 9th May the third Mealy of the spring occurred when the following male was trapped (left with Lesser Redpoll right): 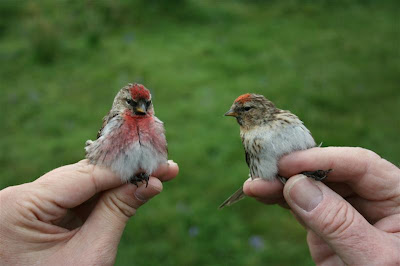 I would suggest that the 'polls in part two are Mealy as well. From what I understand Greenland type are much streakier on the flanks and resemble big Lessers.

Thanks Phil - I'd looked at Punk Birder - informative and funny!

You may be right (and it is probably what I thought at the time)about the Redpoll Spp being the fourth Mealy of the spring...

...and what about that konk?

I think the measurements will probably be inconclusive otherwise I'd have nailed it at the time!

Keeps us going on dark winter days though...

As suspected the wing length we took at the time meant that it was not even a Mealy (according to Svensson) ...