Despite the light south-easterly wind a very cold day with the first snow visible on Snowdonia. Forty five species logged today was exceptional for early winter. The Brent seem to have stabilised at about 120 for the moment, but among the duck recorded were 28 Wigeon, 10 Teal and a male Goldeneye. A male and female Peregrine were associating together and a Merlin flew in off the sea from the north. Thrushes were in evidence with 4 Redwing, 5 Blackbirds, a Song Thrush and a rare (for Hilbre) Mistle Thrush that flew across the obs garden. Among other singles making up the species numbers were, Lapwing, Raven, Black-tailed Godwit and Little 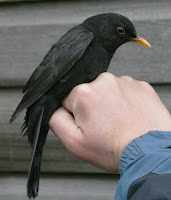 Egret. Counts of waders included 10 Purple Sandpipers (recent day counts indicate that could be near the total), 39 Grey Plover, 180 Turnstone and 17 Sanderling.
(DB)
News now of the Dutch Blackbird controlled on the 11th November (right): it was ringed as a second calender year male on 15th January 2009 at a village on the southern edge of the Wadden sea called Den Oever in Nord Holland. It appeared to have spent last winter there as it was retrapped twice up to 1st March, but it seems it preferred going further west this season. It is likely it did not summer in Holland but travelled there from further north or east.
(per Bert Winters in Holland)
Posted by Colin at 21:46

Please can you help?

I am very interested in your blackbird from Arnhem.

Have you ever found any female blackbirds from Germany/Holland at this time of the year?

I noticed (looking at the Spurn blog) that there were good amounts of blackbirds coming into Spurn the day before (350+).
Most of these were heading West.
(I am going to ask the question to my contact at Spurn to see if they were all male blackbirds)

I wondered if this might be due to climate change or that central Europe was going to have a bad winter.

Are the blackbirds we see young male ones only?

I would appreciate your thoughts
by return email.(when you get a minute!)

Thanks for your query. I know we have had recoveries/controls of Blackbirds from Northern Europe historically. Eg Norway, Sweden, Denmark, Germany and Holland.

We will check the dates and age/sexes and let you know. However, our sample size will not be large(probably less than 10).

PS I can not get your email address from the blog