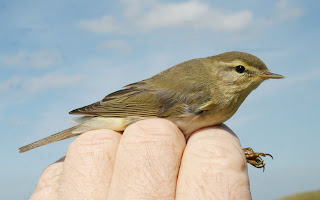 After yesterdays huge (for Hilbre) fall of Willow Warblers, this morning saw about half that number which is still a very good day on the island. The 500th bird ringed this year (left) was appropriately a Willow Warbler, bringing up a number which has seldom been achieved before the end of the 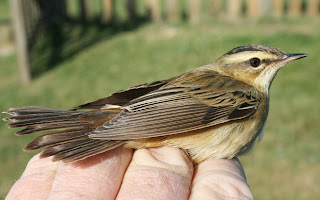 spring. Two Grasshopper Warblers were suspected of being present but neither was ringed although 4 of the 5 Whitethroats and 2 Sedge Warblers (right) were more obliging. 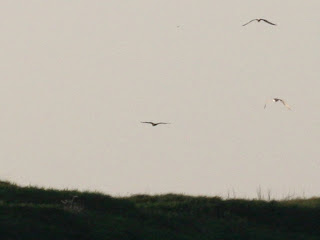 Soon after dawn a Marsh Harrier flew over Middle Eye (distant photo left, centre of picture, harassed by gulls) then after approaching Little Eye it made off towards the shore.
Swallow passage was slightly more evident than of late, (but no House Martins), and mid-morning 2 Swifts flew low over the centre of the island. Only 2 Wheatears, a female and a male were noted all day. 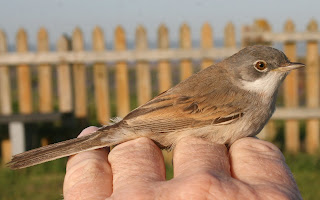