With rain in the early hours observers could have been forgiven for thinking precipitation had arrived too early and 'mainlanders' arriving early morning took their time watching a rather late Merlin on the ridge south of Middle Eye (see below).

Arriving at 5.45am they were greeted with news that there were many warblers on the island and the ringers set about a 'first round' of the heligoland traps which produced a Redstart, many Willow Warblers and the first of many Whitethroats. Ringers have been very fortunate over the last week with regular falls of migrants (see right).

A Garden Warbler was then heard singing near the SK and when one was found in the mist net everyone assumed that was the bird in question but another was caught later in the Newton; the third record of this Spring on Hilbre of a species more often associated with autumn here (see left). 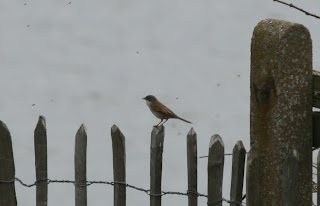 Visible migration was mainly related to Swallows with at least 350 passing over during the day accompanied by the occasional House Martin and 25 Swifts, however, earlier in the day a Tree Pipit and a couple of Yellow Wagtails passed overhead.

Later in the morning a couple of Sedge Warblers were caught in quick succession but it was a day for Whitethroats with at least 15 birds present on the island and an incredible 12 caught and ringed. A typical view of a Whitethroat (male above) on Hilbre today with plenty of insects around for migrants to feed up on.

However, not to be outdone was the bird of the day - a

Willow Warbler (see left) ... this time a control of a bird ringed elsewhere trapped in the Old Obs garden mist net. Amazingly its first three digits were the same initials as one of our most senior and longstanding members who has been present on the island for the last two weeks.

A Whinchat appeared late morning but remained unusually elusive only being seen a couple of times at the South End. Whimbrel numbers were impressive with at least 33 bird counted around high tide, when tern numbers were slightly down on the last week or so.

Heavy rain arrived around midday and ringing activities were suspended. However, with sunshine bursting through midway through the afternoon a new Whitethroat and Sedge Warbler were caught. This has been one of the best Springs in recent memory on the islands for common migrants ... and it is still only the 7th May!