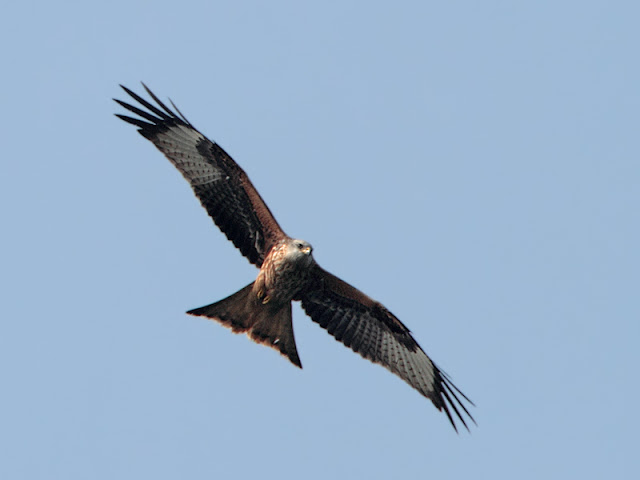 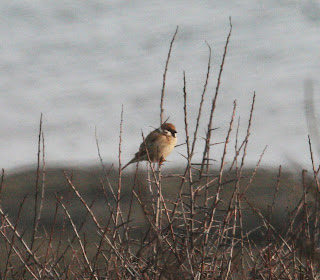 At 11.15am information was recieved of a Red Kite passing Leasowe and travelling west and 10 minutes later it was seen from Hilbre over the houses on the Hoylake shore, it was then 'twitched' by members at Stanley Road (AMC,CJW) before it gained height over the golf course being mobbed by Crows and after decending again it continued inland. The bird was seen over Black Horse hill West Kirby and later by 2 members at Bidston tip. (AEH,AO). This is the first Red Kite recorded at Hilbre since 2001 and the 5th record ever, the first was in 1994. The above superb photo of the Red Kite is by Steve Round who was on the spot at Leasowe as it passed overhead. 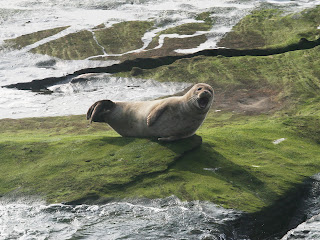 This was just the icing on the cake of a number of good Hilbre birds today following an overnight south easterly. Scarcities for the island included 2 and then 3 other Magpies (below), a Woodpigeon, 2 Lapwings,a total of 8 Jackdaws, a fine Tree Sparrow (above) and a Collared Dove. Passage overhead was good early in the morning but had somewhat died by 10.00am, likewise grounded migrants were mostly in the first few hours after dawn. Meadow Pipits were in medium numbers, Goldcrests again featured with 25 on the island with 6 Chaffinches, 5 Goldfinches, 25 Siskins but just 4 Lesser Redpolls also 4 Wheatears,7 Pied Wagtails, 2 Starlings and 2 Skylarks. The 30 bird ringing day also featured a Chaffinch control (ringed elsewhere). The trusty Merlin 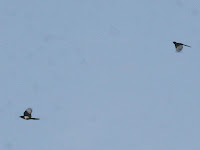