A cold grey morning greeted observers but the ice and snow were melting during the first few hours of the day as the temperature was well above zero on the island although the main pond remained frozen and a moderate easterly breeze picking up as the morning wore on meant that it felt colder.  Snow had started falling again by late morning.

The Rabbit (left) was in its usual location on the path first thing this morning allowing the photographers a chance for a quick snap, although the light was poor, and a single Common Seal was present off the North End again along with the numerous Atlantic Grey Seals.

Two nice flocks of Scaup (see below) were found drifting off the West side that totalled 32 birds (14 + 18); nice to see this species off Hilbre again in Winter. 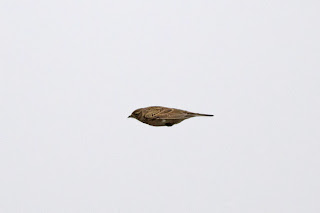 Waders were also in evidence with 15 Purple Sandpipers counted and a good flock of 30 Bar-tailed Godwits heading towards the North shore.

There was some evidence of cold weather movement when a Skylark (left) arrived and briefly alighted on the main path before relocating to the South End.  There were several Song Thrushes on the island and a new bird was trapped and ringed along with a retrap Robin. 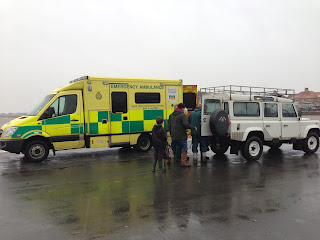 Those present decided to have one last brew before leaving the island and this decision proved fortuitous as a member of a group of walkers from Nantwich/Crewe (Cheshire) had fallen on the rocks between the islands and dislocated her shoulder.  Obs members were able to take her off in the landrover and had contacted the ambulance service (via the coastguards) who met them at the shore and took her to hospital.

Note:  We understand that the lady walker is doing well although she had dislocated and broken her shoulder; she had been kept in hospital overnight as a precaution.
Posted by Hilbre Steve at 16:11