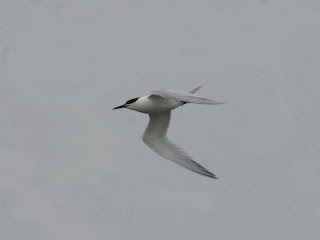 A day when the weather forecast was not at all correct and the wind was much stronger and therefore colder than expected and light rain arrived in the afternoon. At dawn it looked as though there would be no migrants until a few Goldcrests arrived and then a passage of finches occurred (15 Chaffinches, 22 Goldfinches, 8 Greenfinches) and a large movement of Meadow Pipits (at least 500) lasting for a couple of hours, more later trickling in over the sea from the north west. A most unusual feature for Hilbre (although often seen at Red Rocks) were flocks of 56, 52,12, 8 and 4 Woodpigeons crossing the island high going west, also fly-overs but a more typical sight were 6 and 2 Jackdaws and a Rook. Several passerine species seen this morning but soon disappearing included a Chiffchaff, a Blackcap, 2 Wheatears, 4 White Wagtails, a Grey Wagtail, a Starling and a Reed Bunting. A female or first winter Merlin flew south from the main island early and was later on the ridge south of Middle. Little Gulls came slightly closer than normal this morning and 30 were counted off the north end. Three more of the first to arrive Sandwich Terns also gave closer views than on previous days (above right), other seabirds being scarce, just a single Red-throated Diver, 4 Red-breasted Mergansers, 10 Common Scoter and 7 Great Crested Grebes. The first tadpoles have hatched in the ponds, and 'Thumper' made a brief appearance.
Ringed :- 4 Chaffinches, 3 Goldcrests, 2 Blackbirds, 1 Goldfinch, 1 Wren.  [ 74-17 ]