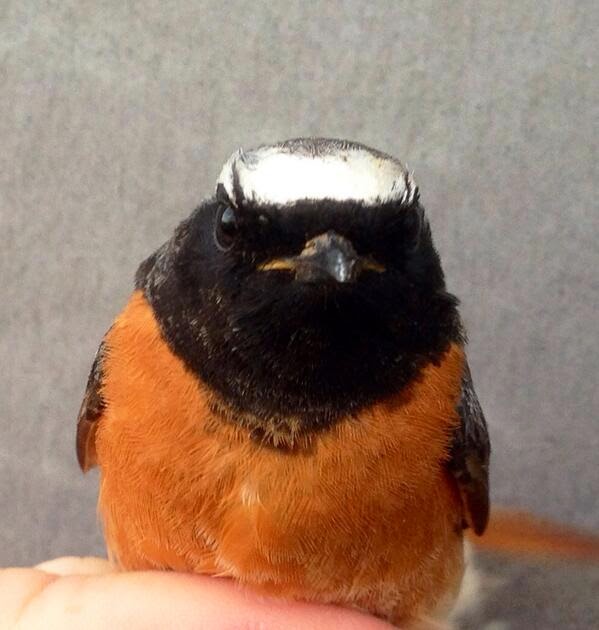 Another good migration day, and once again this morning the first bird caught was a Redstart (right, [SRW]), it was followed shortly afterwards by a male Whitethroat and another Redstart. 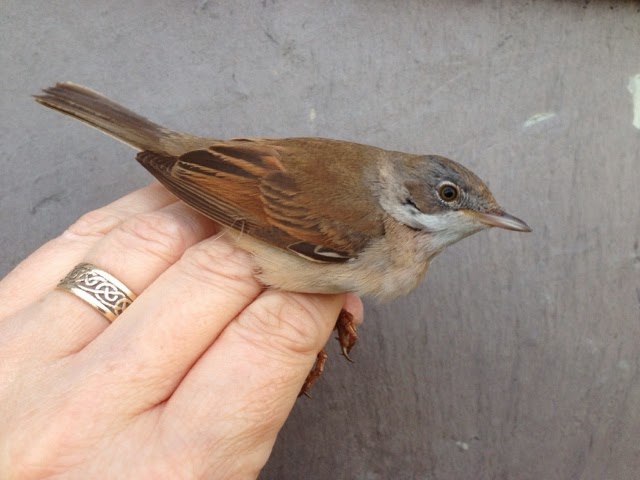 The Willow Warblers did not start to drop in until about 07.00hrs and promptly stopped doing so at about 08.00hrs, although there were a couple of other smaller pulses later in the morning which brought the total to at least 30. Yet another Redstart (it's been a good early spring for this species) and a Blackcap were seen, also a flyover Tree Pipit and 5 Yellow Wagtails, 3 of which came to ground briefly on the west side. There was good sucess with the potters with 4 Greenland Wheatears caught and another in the newton trap. Corvids over included 2 Rooks and 3 Jackdaws, while hirundines were down in numbers today with 17 Swallows and 3 each of House and Sand Martins. There were no Redpolls today and only 5 Goldfinches were registered, also 2 White and 2 Pied Wagtails. First of the year records were 15 Common Terns and 2 Little Terns out distantly at the west hoyle, while Sandwich Terns are now building up with 150 noted today, also Gannets with 25 on the sea. Best waders were 4 Whimbrel, 16 Bar-tailed Godwits and 30 summer plumage Sanderlings. Late morning a House Sparrow was calling around the paddocks and the final surprise was a Grasshopper Warbler that starting singing at noon, presumably just arrived as the area had been assiduously covered many times during the morning. A Speckled wood butterfly was liberated from the Newton trapping box, the first at Hilbre this year.
Ringed:- 26 Willow Warblers, 3 Chiffchaffs, 2 Redstarts, 5 Wheatears, 1 Grasshopper Warbler, 1 Whitethroat, 1 Goldfinch, 1 Linnet.   [ 358-25 ]
(DB,CJ,SRW,TGW+1,GIW,CJW(F)) + Matt Thomas
Posted by Colin at 22:59