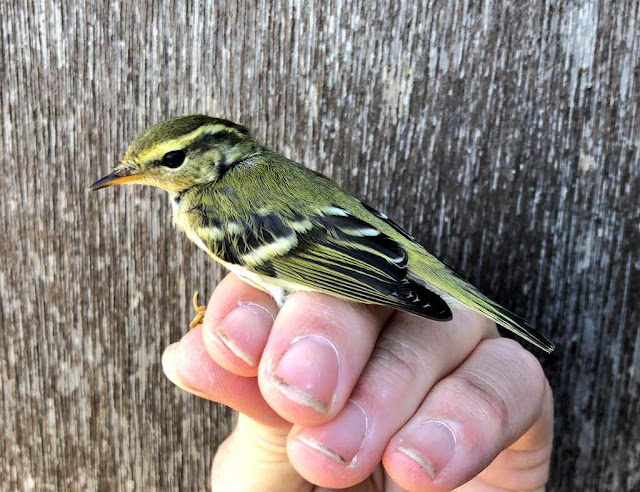 What a fantastic day on the islands!  It started early with an obvious arrival overnight of Blackbirds around the gardens and as dawn broke it was clearly going to be a good day for visible migration (aka vis-mig).  Skylarks passed over calling as did Meadow Pipits and finches were well represented with Linnet, Siskin, Chaffinches, Goldfinch, Redpoll and the first Brambling of the year could be heard ‘wheezing’ overhead. 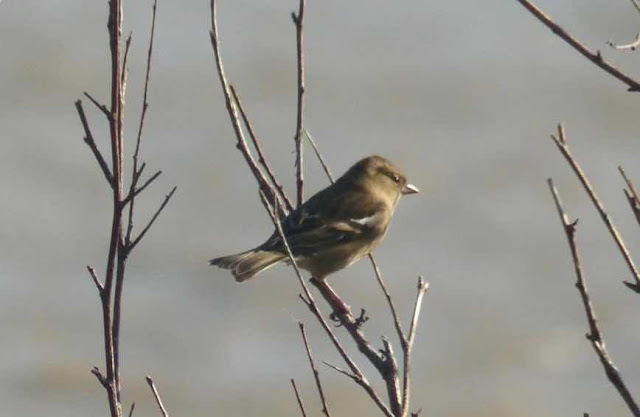 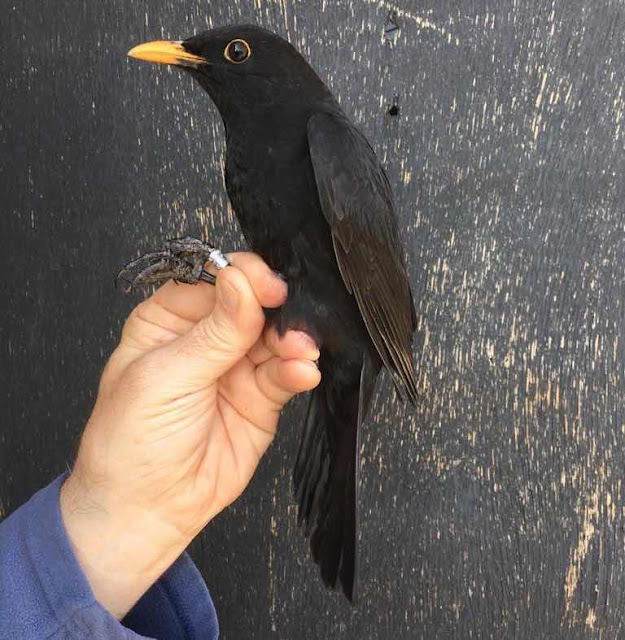 The first two Fieldfares of the autumn dropped out of the sky into the Old Obs garden before ‘chucking’ away south and a Woodpigeon flew south down the west side. 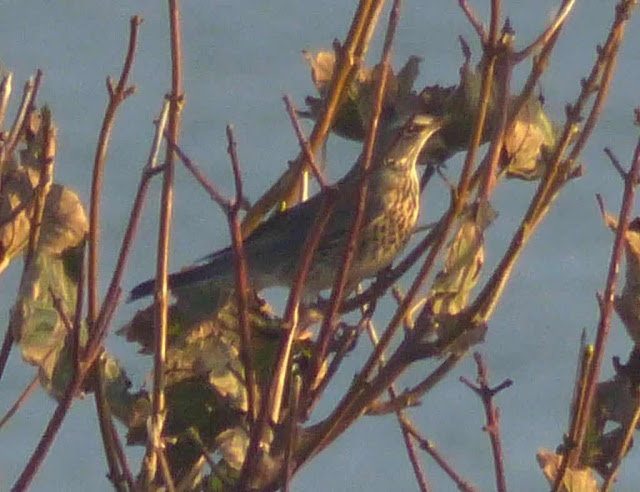 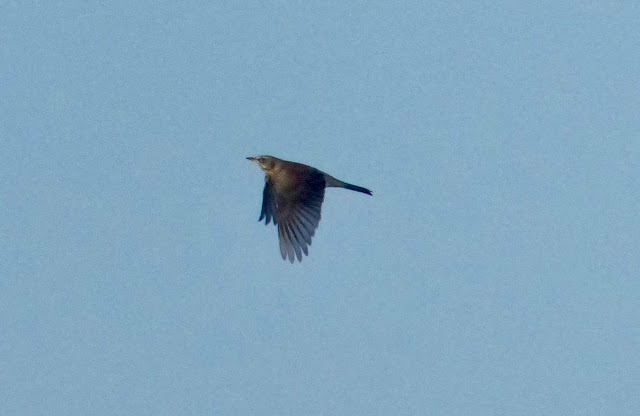 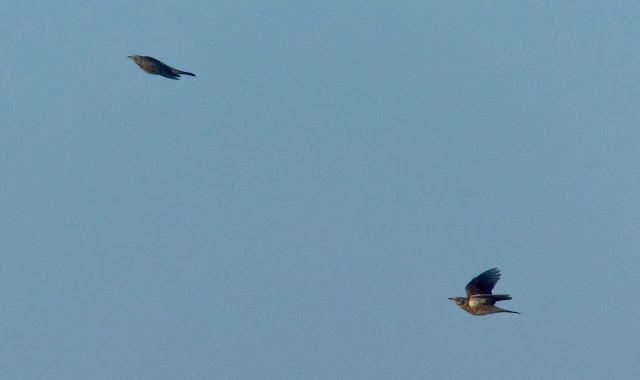 Alba and Grey Wagtails were noted overhead and at least five Reed Buntings passed through including this bird which temporarily rested on the sandstone and seaweed before continuing its journey. 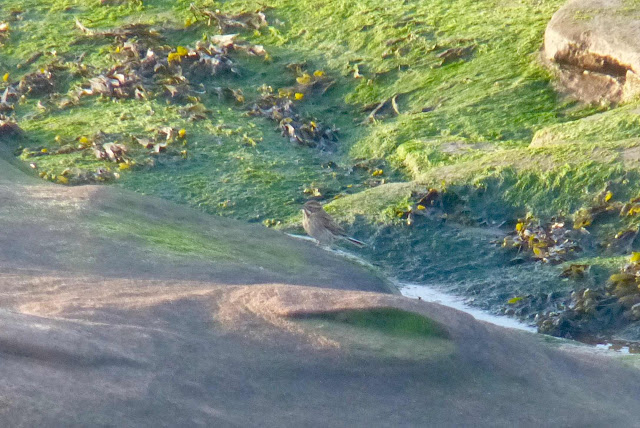 There were very few grounded migrants around the trapping area but a Sparrowhawk was caught in the SK early morning - no doubt passing through with the other vis-mig; two Kestrels appeared over the island mid afternoon. 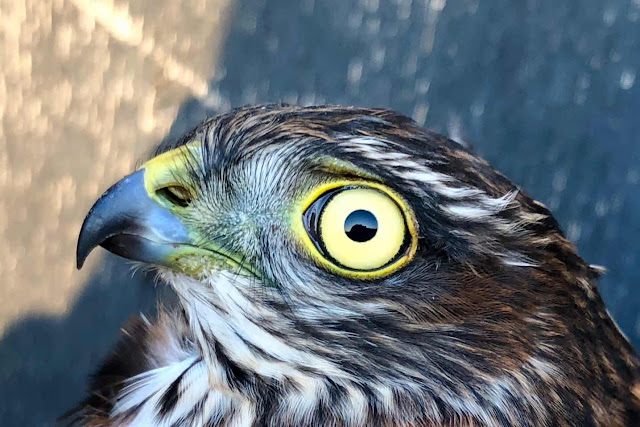 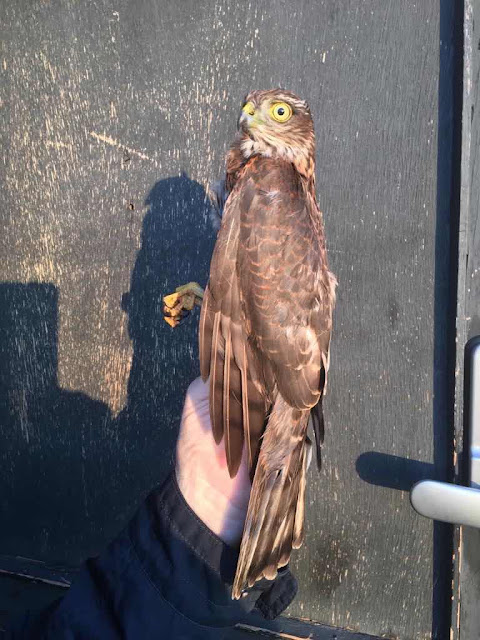 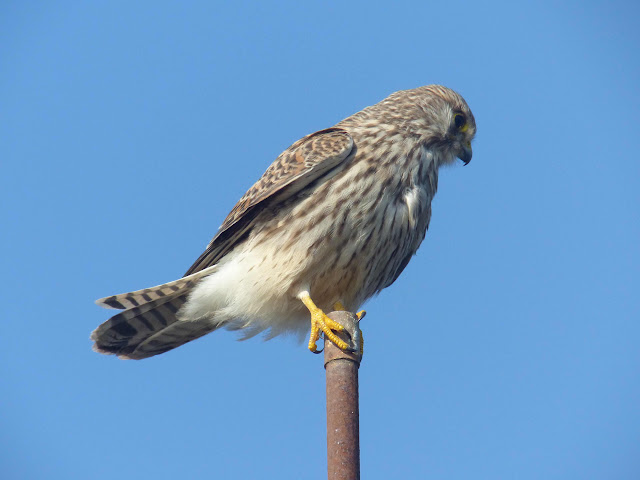 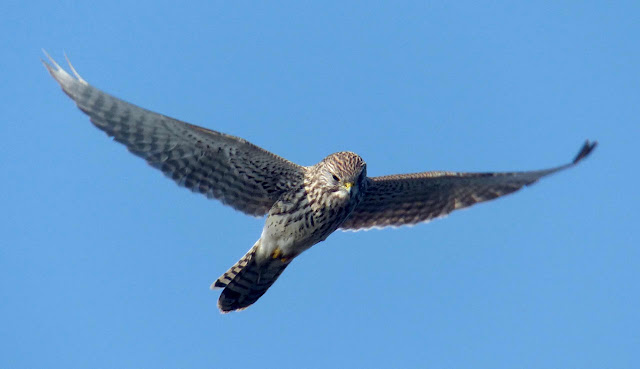 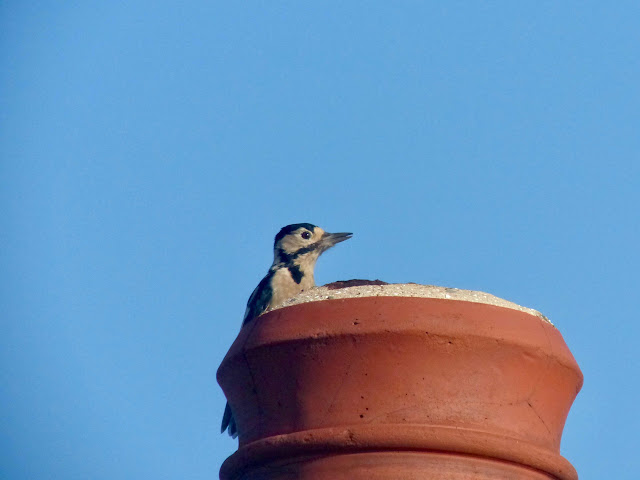 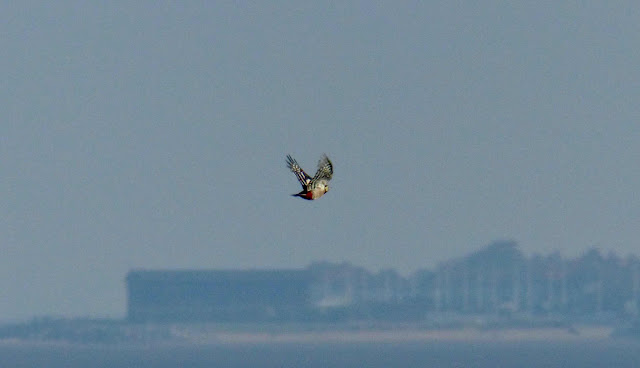 Corvids were well represented in the vis-mig bonanza with Jackdaws and Rooks adding to the usual Crows and Starlings passed over in small flocks. 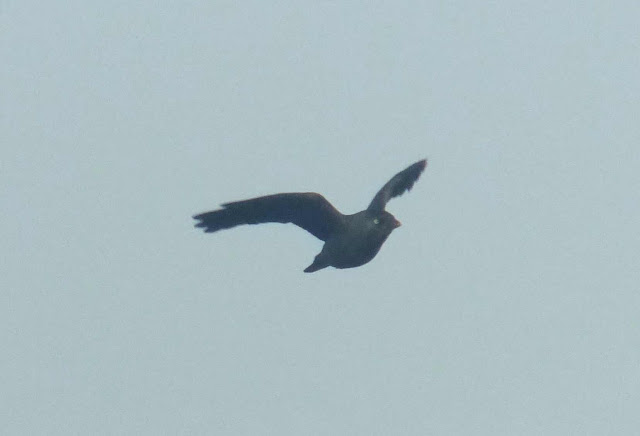 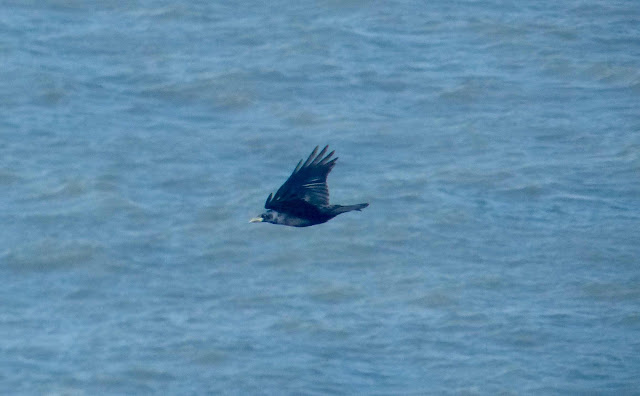 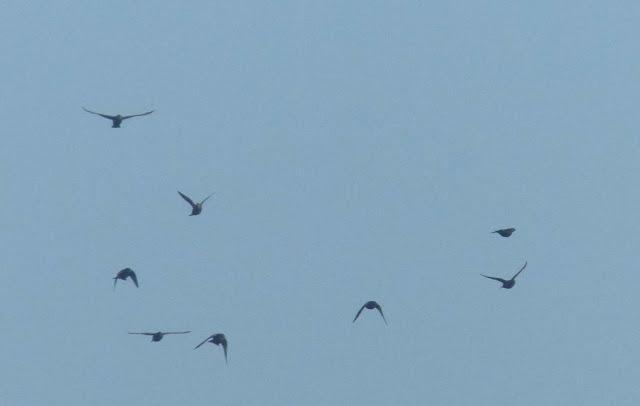 A single Wheatear was found by visiting birder John and a single Redwing, another first of the autumn, flew south ‘tseeping’ away amongst some Meadow Pipits (causing some consternation until it was seen!)

Meanwhile, the island’s Ranger was busy mowing the upper paddock (which will be great for pipits for the next few weeks!) amongst his many other jobs. Although it’s not a bad place to work on a day like today! 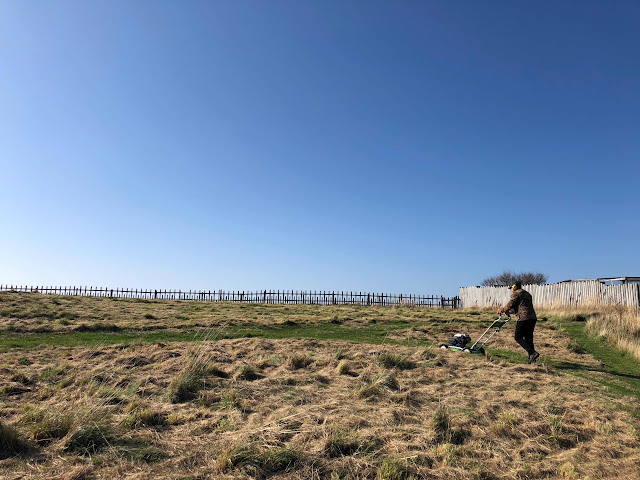 Observers were on another round of the island just before 2pm when the distinctive call of a Yellow-browed Warbler was heard in the Old Obs garden - proving rather elusive for a while it eventually gave itself up fully when it flew into the mist net and was taken back to the Obs where it was ringed and released, with visiting birders and Obs members being delighted. 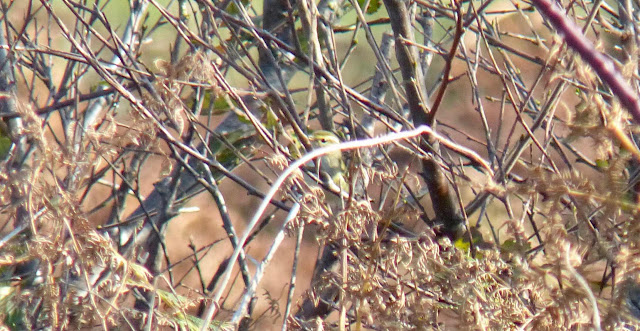 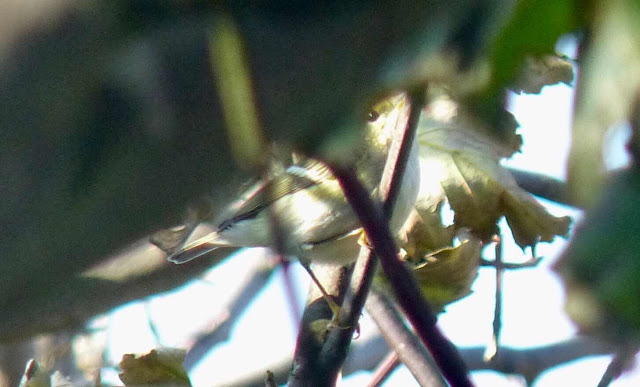 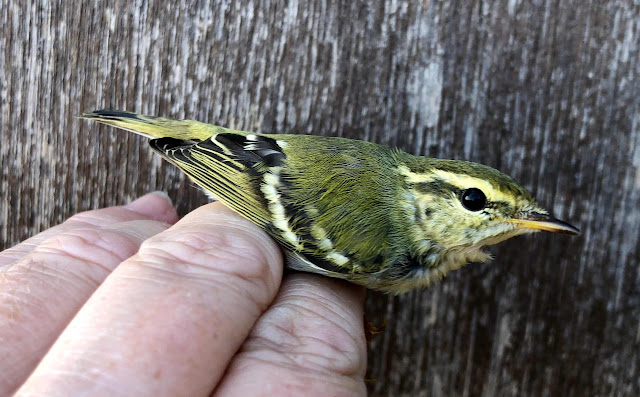 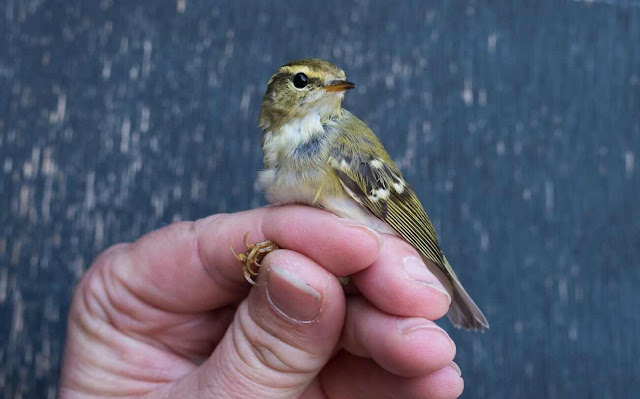 This is the seventeenth record of Yellow-browed Warbler for the Obs; all of which have been trapped and ringed.  It was released in the Obs garden were it was subsequently seen and heard on a couple of occasions before disappearing.

After the Yellow-browed Warbler was found a Blackcap appeared in the gardens.  Amazing what can be found throughout the day.

Observers were rarely distracted from the sky or the bushes but a worthwhile seawatch from the Lookout resulted in 4,500 Common Scoter counted mainly off the west side between Hilbre and the Point of Ayr.  A single Great Northern Diver was seen passing the North End - another first of the autumn.  However, the highlight of the seawatch was a single Bottle-nosed Dolphin which showed well to three observers the Hilbre side of the scoter flocks.

It was a stunning end to the day on the islands with warm south-easterly airflow and clear skies...what will tomorrow bring?